The feature race on Sunday at Saratoga was the $350,000 Alfred G. Vanderbilt Handicap (G1), one of the premier races for older sprinters on the east coast. A field of 7 went to post in this 6 furlong main track event under sunny skies and temperatures in the low 80's. Rock Fall was sent off as the even-money favorite off his win in the True North (G2). In to challenge him included 7-2 second choice Salutos Amigos, winner of the Tom Fool Handicap (G3) before finishing 8th in the Dubai Golden Shaheen (G1), and 4-1 third choice The Big Beast, fourth in the Carter (G1) last out after winning last year's King's Bishop (G1).

11-2 fourth choice Favorite Tale dueled for the lead with The Big Beast down the backstretch through fractions of 22.74 and 45.31 while stalked by Rock Fall and Salutos Amigos. At the top of the lane, The Big Beast gained a short lead through 5/8 in 56.84. Rock Fall came out 4 wide for room and rallied to get the win in a photo finish in 1:08.75 over the fast main track. It was 2 lengths back to Favorite Tale third. 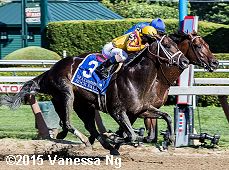 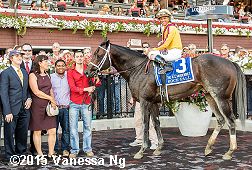 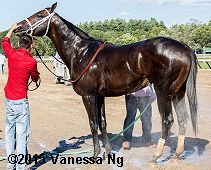 Left: Rock Fall in the winner's circle. Winning trainer Todd Pletcher said, "He finished powerfully and we were fortunate to be on the right side of a very close head-bob. It's tough to win a photo against a horse as big as The Big Beast. If you're head-and-head, he's got  a head on you. We got a fortunate bob and it was a great horse race. In the stretch I thought we had him, and then I thought he was coming back and he had us, and Javier said The Big Beast just re-rallied. It wasn't like Rock Fall was slowing down, they were coming home."

Right: Rock Fall gets hosed off after the race. Winning jockey Javier Castellano said, "The bob could have gone either way; I was lucky it went my way. He was a really nice horse the way he did it today, off the pace. There was a lot of speed in the race and he covered up perfect. Turning for home I let him go outside; that's where he likes it, and it paid off today. My horse fought back to win the race. I give all the credit to him." 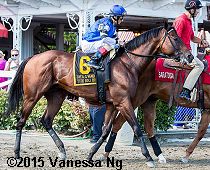 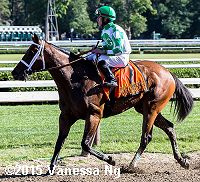 Left: Second place finisher The Big Beast heads out for the post parade. Trainer Tony Dutrow said, "I thought our horse was good, I thought Johnny (Velazquez) was good. I thought it was all good and I thought we lost the bob. Am I wrong? He broke well, like he does, and picked it up when Rock Fall came for him."

Right: Third place finisher Favorite Tale returns after the race. The 11-2 fourth choice set the pace under Irad Ortiz Jr., then tired in the lane to finish third beaten 2 lengths. The Guadalupe Perciado trainee improved his record to 6 wins, 3 seconds, and 2 thirds in 15 starts, earning $586,626 for owner PJG Stable.


The $250,000 Bowling Green Handicap (G2) featured a field of 9 older horses going 1 3/8 miles around 3 turns of the inner turf course. Innovation Economy was sent off as the 2-1 favorite off his win in the Belmont Gold Cup. In to challenge him included 5-2 second choice War Dancer, 6th in the Manhattan (G1) after finishing second in the Man O'War (G1), and 11-4 third choice Imagining, 5th in both the Man O'War (G1) and United Nations (G1). 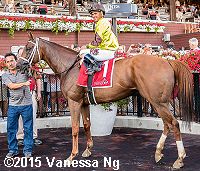 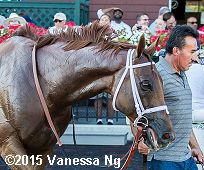 Left: Red Rifle in the winner's circle. Winning trainer Todd Pletcher said, "He relaxed very kindly and rated nicely. It was a super ride and he delivered a big performance. He's now won big races on three different surfaces. He's just a throwback kind of horse, he's hardy, he's tough. He's a gelding now, we just need to look at the opportunities and place him where he fits. He won the Hawthorne Gold Cup last year, he just won a race on Polytrack at Woodbine and now on the turf. All options are on the table."

Right: Red Rifle heads back to the barn after the race. Winning jockey Javier Castellano said, "Perfect trip. I was able to take advantage all the way inside on the rail. In a long distance, on the grass, the most important thing is to save all the ground. And that's exactly what I did. He did it very professionally today and I'm very satisfied with the way he did it." 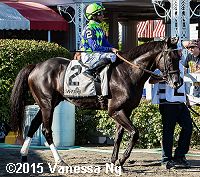 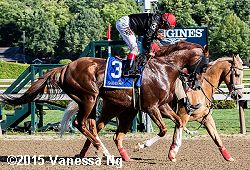 Left: Second place finisher War Dancer heads out for the post parade. Trainer Bill Mott said, "The horse ran tough. He tipped out a bit, but I guess we were the second best in the race."

Right: Third place finisher Imagining in the post parade. The 11-4 third choice raced 2 lengths off the pace under John Velazquez, challenged for the lead on the far turn but faded to finish third beaten 3 3/4 lengths. The Shug McGaughey trainee improved his record to 9 wins, 5 seconds, and 2 thirds in 25 starts, earning $1,147,394 for owner-breeder Phipps Stable. 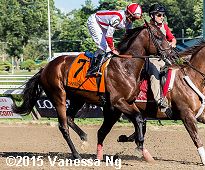 Favorite Innovation Economy in the post parade. Unfortunately, he broke down inside the 5/8 pole and had to be euthanized, the first fatality at the meeting. Co-owner Bill Lawrence said, "You lose a few. One of the strangest things is, it seems like it happens with really good horses. This horse, Chad (Brown, trainer) loved. He came up to a minute ago and said, 'I thought this was the next Big Blue Kitten.' He was really high on the horse. You don't like to lose any of them, but it hurts when you lose a good one."