Belmont Park hosted 6 graded stakes on Saturday afternoon, two of which are Breeders' Cup Challenge "Win and You're In" qualifiers in the 2-year-old dirt divisions. Light rain fell during the races, however the main track remained officially fast and the turf courses firm at the Long Island oval, with temperatures in the high 60's.

The $500,000 Champagne Stakes (G1) features 2-year-olds going 1 mile around 1 turn of the main track in this "Win and You're In" qualifier for the Breeders' Cup Juvenile. Syndergaard was sent off as the 9-5 favorite in the field of 6, undefeated in 2 starts including the Funny Cide Stakes at Saratoga. In to challenge him included 5-2 second choice Favorable Outcome, a debut winner by 6 lengths at Saratoga last out, and 11-4 third choice Big Gray Rocket, a maiden winner in his second start at Del Mar.

Jockey John Velazquez sent Syndergaard to the lead and he set fractions of 22.74, 44.63, and 1:08.78 while pressed by Big Gray Rocket and stalked by Favorable Outcome. Syndergaard led to midstretch through 7f in 1:21.49, but 3-1 fourth choice Practical Joke, last early under Joel Rosario, came through late to outfinish Syndergaard by a nose in 1:34.68. It was a long 6 1/2 lengths back to Favorable Outcome third.

Check out the other races on the card: The Jockey Club Gold Cup and The Flower Bowl, Kelso Handicap, and Belmont Turf Sprint Invitational. 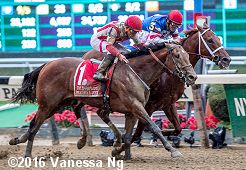 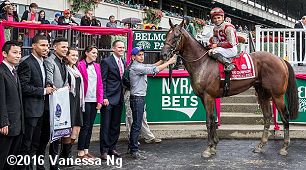 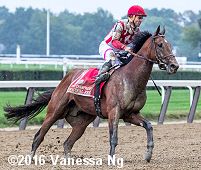 Left: Practical Joke in the winner's circle. Winning trainer Chad Brown said, "Joel quickly moved inside of horses, which I thought was smart, and set himself up for a clear run when he tipped him out. They were obviously going very fast in front, not only the two leaders, but my other horse (Favorable Outcome) in close pursuit behind, so the race set up beautifully for this horse. He's undefeated, he's a really good horse. He's handled the distance increases every time we've asked him to, and we're looking forward to getting to run him a little bit further. The runner-up is a very good horse as well, and deserves a lot of credit for fighting as well as he did."

Right: Practical Joke spooks while returning after the race. Winning jockey Joel Rosario said, "He kind of broke awkward on the inside and I had to use him a little through the chute. He was looking around and it took him a little time to get back in the race but he was fine after that. They were going really fast up front but it looks like the more distance he gets to run into the better he gets. For a second when I got to (Syndergaard) he waited a little bit. He's still a young horse if anything but looks good going forward." 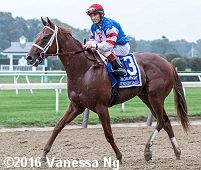 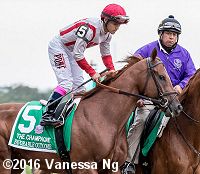 Left: Second place finisher and beaten favorite Syndergaard returns after the race. Jockey John Velazquez said, "Tough beat. Not much to say -- other than he got beat. He had to fight the whole way around, and that was it. He dug in."

Right: Third place finisher Favorable Outcome in the post parade. Trainer Chad Brown said, "Looking at the race now, he was probably a little too close to the pace. They were just going so fast, and when (Irad Ortiz, Jr.) came back, he said they were going a little faster than he thought, and it might have taken a little of the starch out of him. I thought he ran well considering he was close to that pace to be third."


Kicking off the stakes action on Saturday, the distaff counterpart of the Champagne is the $400,000 Frizette Stakes (G1) for 2-year-old fillies going 1 mile on the main track, looking for an automatic entry into the Breeders' Cup Juvenile Fillies. Yellow Agate was the 6-5 favorite in the field of 6 off her debut win last out at Belmont. In to challenge her included 8-5 second choice Nonna Mela, winner of the Adirondack (G2) at Saratoga, and 15-4 third choice Sky Gesture off her Saratoga debut win.

Jockey Irad Ortiz Jr. sent 7-1 fourth choice Libby's Tail to the lead through fractions of 22.86, 45.69, and 1:10.75 while pressed by Nonna Mela and stalked by 24-1 Colorful Charades. Entering the stretch, Libby's Tail continued to lead but Yellow Agate, 5th early under Manny Franco, came out 3 wide for room and rallied to win by a head in 1:35.62. It was a long 9 1/4 lengths back to Colorful Charades third. 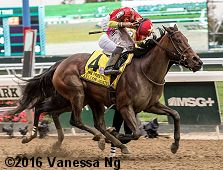 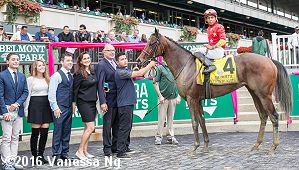 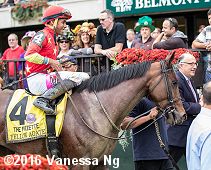 Left: Yellow Agate takes her walk down Victory Lane. Winning trainer Christophe Clement said, "I think today was a major jump going from a maiden win to a Grade 1 win. She's always been nice from the beginning but It was a great ride by Manny. He never panicked and came from off the pace. The filly was comfortable, he waited and took her wide giving her a chance. She then went to take on that horse on the lead. I think it was a very mature ride from Manny."

Right: Yellow Agate in the winner's circle. Winning jockey Manny Franco said, "I wanted her to break good and I wanted to settle her down, because I knew she was going from short to long today. I just wanted her to relax and be comfortable and I made my move at the right time. At the 1/4 pole, she didn't switch leads, so I worked on her and she gave me that second reaction." 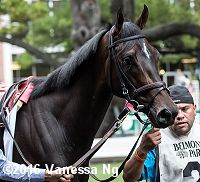 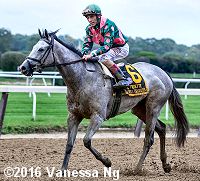 Right: Third place finisher and beaten favorite Colorful Charades returns after the race. The Rudy Rodriguez trainee has a record of 1 win and 1 third in 2 starts, earning $89,000 for owner Michael Ryan.


The $500,000 Hill Prince Stakes (G3) featured a field of ten 3-year-olds going 1 1/8 miles over the inner turf course. Secretariat Stakes (G1) winner Beach Patrol was sent off as the 5-2 favorite over 3-1 Camelot Kitten, winner of the Hall of Fame Stakes (G2) but second in the Saranac (G3), and 5-1 Annals of Time, second in a Saratoga allowance last out.

Jockey Javier Castellano sent 6-1 Monster Bea to the lead first time by through fractions of 24.89, 48.80, and 1:12.35 while pressed by Beach Patrol and stalked by 13-2 American Patriot. Entering the stretch Beach Patrol, 3 wide, gained a short lead through 1 mile in 1:35.61, but Camelot Kitten 7th early, came out 5 wide for room and rallied to win by a head in 1:47.25 over the firm going. It was another length back to Annals of Time third, completing a Chad Brown sweep of the trifecta.. 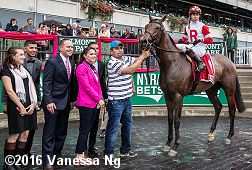 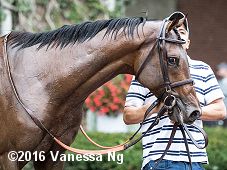 Left: Camelot Kitten in the winner's circle. Winning trainer Chad Brown said, "You put three horses in a race like this, with so many talented horses in the race, you're just happy that one of them wins. And for them to sweep the purse is an incredible feeling. I'm sorry there had to be a loser in the race. Camelot Kitten got the better trip, saving all the ground and angling out. We never really looked beyond this race. Obviously, the Hollywood Derby out west is an opportunity to run against straight three-year-olds on turf. I think all three would be considered for that race.

Right: Camelot Kitten heads back to the barn after the race. Winning jockey Irad Ortiz Jr. said, "I was in good position, saving ground the whole race, just waiting, and everything came out perfect. He's always game and he fights. He's a neat horse." 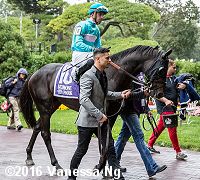 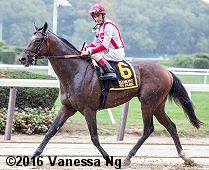 Left: Second place finisher and beaten favorite Beach Patrol heads out for the post parade. Trainer Chad Brown said, "All three horses ran so well, particularly Beach Patrol in defeat. It was close at the wire. Beach Patrol did the brunt of the work up front."

Right: Third place finisher Annals of Time returns after the race. Trainer Chad Brown said, "Annals Of Time for only his third career start, laying close to the pace and batting on to get third, all three horses ran terrific races."