A field of 6 older fillies and mares contested the $500,000 Flower Bowl Stakes (G1) at Belmont Park, a "Win and You're In" qualifier for the Breeders' Cup Filly and Mare Turf, contested at 1 1/4 miles over the inner turf course. Last year's Breeders' Cup Juvenile Fillies Turf (G1) winner Lady Eli was the 4-5 favorite off her second place finish in the Ballston Spa (G2) after winning the Belmont Oaks (G1). In to challenge her included 3-1 second choice Sea Calisi, winner of the Beverly D (G1), and 9-2 third choice Sentiero Italia, 4th in last year's Breeders' Cup Filly and Mare Turf (G1) but third in the Ballston Spa last out.

Check out the other races on the card: The Champagne, Frizette, and Hill Prince and The Jockey Club Gold Cup. 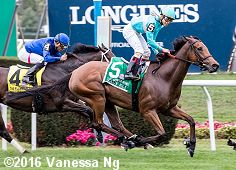 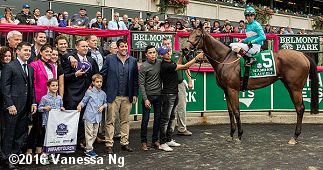 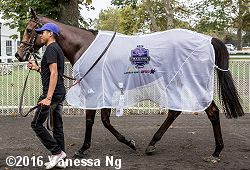 Left: Lady Eli in the winner's circle. Winning trainer Chad Brown said, "It'll be her third race off the layoff, she has a 1 1/4 mile race under her belt now. She has a very good chance of getting the firm turf that she loves out at Santa Anita. She has a win out there already, although they have a new turf course, but I'm sure it's similar. If anything else, she's comfortable with the environment and shipping out there, so I'm excited to bring her into the Breeders' Cup. She's been training outstanding. She couldn't possibly work any better. She ran a lifetime number for me in her first start back off that long of a layoff. I'm expecting another good number today. I think she's better than ever."

Right: Lady Eli heads back to the barn in her "Win and You're In" blanket. Winning jockey Irad Ortiz Jr. said, "I got a good trip. We broke out of there and Senterio Italia had some speed so we sat right off of them. Then (Itsonlyactingdad) showed some speed today, so we sat and I tried to wait as long as I could. I could have saved a little more ground but that's the way the trip was coming out and it worked out good for us. She was ready today." 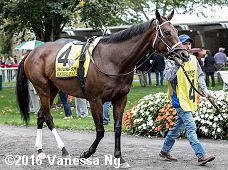 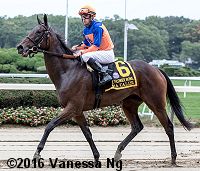 Left: Second place finisher Sentiero Italia in the paddock. Trainer Kiaran McLaughlin said, "She's a very nice filly. It looked like there was no pace so we decided to go to the lead, which was fine. She ran very well, ran great. Congrats to the winning connections, very good story there. The Breeders' Cup is very possible, I'll talk to the Godolphin people."

Right: Third place finisher Sea Calisi returns after the race. Trainer Chad Brown said, "It was a slow pace and she was following Lady Eli the whole way. Florent (Geroux) said if he had enough horse, he would have kicked with her. I thought the race did her well, she had a little gap there between the Beverly D. I think this race will do her real good. I'm looking forward to running her back in four weeks rather than the lengthier spacing she just had. I think she'll move forward off of this."


The $400,000 Kelso Handicap (G2) featured a field of 5 older horses going the one-turn mile trip over the Belmont main track. Westchester (G3) winner and Metropolitan (G1) runner-up Anchor Down was sent off as the 2-1 favorite over 5-2 Tommy Macho, unraced since winning the Fred Hooper (G3) at Gulfstream in February, and 3-1 Tamarkuz, second in the Forego (G1).

Jockey Javier Castellano sent Anchor Down to the lead exiting the chute and he set fractions of 23.30, 45.74, and 1:09.05 while pressed by Tamarkuz and stalked by 7-1 Ocean Knight. Entering the stretch Anchor Down continued to lead through 7f in 1:20.88. Kept to task by Castellano, Anchor Down pulled away in the final furlong to win by 2 lengths over Tamarkuz in 1:32.90, just 66/100 seconds off the track record. It was a long 4 1/2 lengths back to Ocean Knight third. 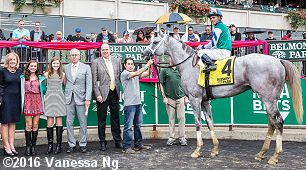 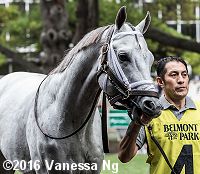 Left: Anchor Down in the winner's circle. Winning trainer Todd Pletcher said, "He's run well every time in a one-turn mile at Belmont, it seems to be his thing. It was no disgrace being second to Frosted in the Met Mile that day - I don't think anyone was going to beat Frosted. To come back and run a mile in 1:32 and 4/5 fifths, as a well-bred son of Tapit, it's a big win for him. I would probably think a one-turn mile is a little more to his liking (than the Breeders' Cup Dirt Mile at Santa Anita going two turns). We'll enjoy this one for the moment, but if I were guessing right now I'd probably lean toward the Cigar Mile."

Right: Anchor Down in the paddock before the race. Winning jockey Javier Castellano said, "My main concern was focusing on breaking good out of the gate because this horse has had a couple of issues out the gate. He got a good clean trip and a good break so using my best judgment I put him on the lead. He's a great horse. He's a pro and he showed up today." 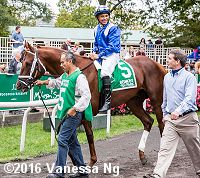 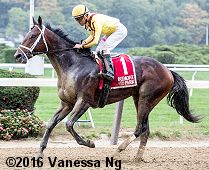 Left: Second place finisher Tamarkuz in the paddock before the race. The Kiaran McLaughlin trainee improved his record to 7 wins, 4 seconds, and 0 thirds in 19 starts, earning $1,290,444 for owner Shadwell Stable.


New to the stakes schedule in 2016, the $150,000 Belmont Turf Sprint Invitational featured a field of 9 older horses sprinting 6 furongs on the Widener turf course. Jaipur (G3) and Parx Dash (G3) winner Pure Sensation was the 2-1 favorite over 4-1 Green Mask, second in both the Highlander (G2) at Woodbine and the Troy Stakes at Saratoga, and 9-2 Long On Value, 4th in the Troy. Jockey Mike Smith sent 10-1 Power Alert to the front through fractions of 21.86 and 44.49 while pressed by 24-1 Pool Winner and stalked by Pure Sensation. Power Alert held the lead to midstretch through 5/8 in 55.63, but Pure Sensation 3 wide in the lane, got up to win by a head in 1:07.10, just 34/100 seconds off his own course record set in the Jaipur. It was another 3/4 length back to Green Mask third. 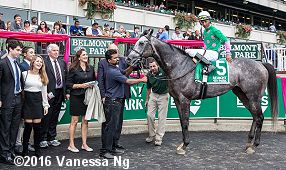 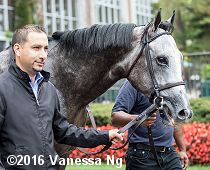 Left: Pure Sensation in the winner's circle. Winning trainer Christophe Clement said, "It was a fun race. I was surprised not to be on the lead, but he Kendrick rode a great race and never panicked. He just sat there near the pace. Mike Smith (aboard Power Alert) is always dangerous on the lead, so I was worried about him because he never goes too fast. I didn't speak to Kendrick yet about the race, so I don't know how he felt or the way he thought. But watching the race I thought, 'OK, we're having a great trip, saving ground.'"

Right: Pure Sensation heads back to the barn after the race. Winning jockey Kendrick Carmouche said, "Mike Smith wanted the lead and Mr. Clement just wanted me to let the horse be comfortable in whatever position. I was sitting in the perfect spot. I just had to wait on the opening and the horse pretty much did the rest. I appreciate the opportunity to ride this horse. He's very game. He's really not a good closer from way out of it, but he has closed with me in the Turf Monster last year. I had faith in him that he could do it again and he did." 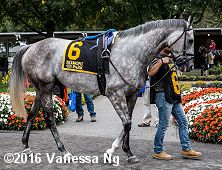 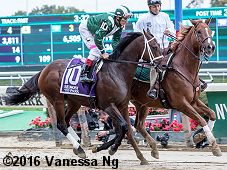