One of the oldest stakes races at Saratoga is the $600,000 Alabama Stakes (G1), featuring the best 3-year-old fillies of the northeast going 1 1/4 miles over the main track. Conditions were excellent on Saturday afternoon with clear skies and temperatures in the mid 80's. As expected, undefeated champion juvenile filly Songbird was sent off as the 1-5 favorite in the field of 7 off wins in the Coaching Club American Oaks (G1) and Santa Anita Oaks (G1). In to challenge her included 7-1 second choice Go Maggie Go, winner of the Black-Eyed Susan (G2) but fourth in the Acorn (G1), and 11-1 third choice Family Tree, winner of both the Iowa Oaks (G3) and Indiana Oaks (G2).

Jockey Luis Saez sent Go Maggie Go to the lead first time by and set fractions of 23.76, 47.77, and 1:11.13 while pressed by Songbird and stalked by Family Tree. On the far turn, jockey Mike Smith asked Songbird to take over and she did easily, opening up a 3 1/2 length lead through 1 mile in 1:36.01. Kept to task by Smith through the stretch, Songbird drew off to win by 7 lengths over late-running 12-1 fourth choice Going for Broke in 2:03.00 over the fast main track. It was another 1 3/4 lengths back to Family Tree third.

Previous winners of the Alabama 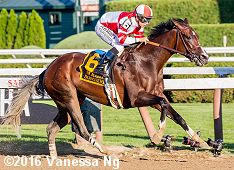 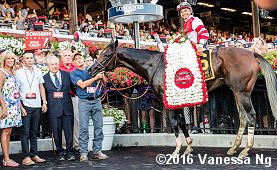 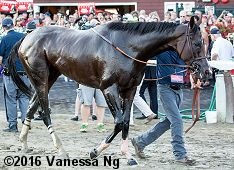 Left: Songbird in the winner's circle. Winning trainer Jerry Hollendorfer said, "I was just happy to see her out there and rating nicely, Mike looked pretty confident on her. I thought she would run well down the lane and she did. I never like to say it's easy but she's just got a lot of talent. She makes it looks easy but it's not easy. I just take every race as it comes up and do my best and she does her best. I think Mr. Rick [Porter, owner] is looking at the Cotillion in his home state of Delaware so we'll look at that."

Right: Songbird heads back to the barn. Winning jockey Mike Smith said, "We were running along a pretty good clip and I was kind of surprised that someone was going with her [Go Maggie Go] which was fine. We can't always get an easy lead and she was comfortable going along down the backside and well within in herself. I knew she going to run well. Today was just more of an emotional day for the whole team with Mr. Porter being ill and having to go to the hospital. I pray he got to watch this and lift his spirits. 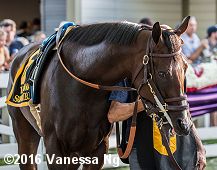 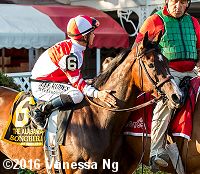 Left: Songbird in the paddock before the race. Hollendorfer added, "This win was real gratifying. First time going a mile and quarter and you always think you can do it but you never know until you actually do it. She responded fine today and I'm very pleased with her. She wanted to go out there and she was free and easy so I wasn't worried about him trying to take her back. It looked like Mike was comfortable the whole race."

Right: Songbird heads out for the post parade. Smith added, "She drew away from them pretty handily. I tried to take a peek on the TV screen [tote board] but my eyes were full of sweat so I couldn't see anything. I really wasn't riding her hard, just coaxing her, trying to keep the same rhythm, same momentum, that we had just to get to the wire. She's got it all. She's got the 'it' factor. Not only can she run, she is extremely intelligent, her mechanics are incredible and her balance is impeccable.  You feel like you are lying on a big king-sized bed, that's how smooth she is." 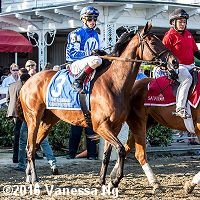 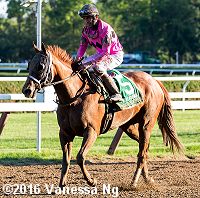 Left: Second place finisher Going for Broke heads out for the post parade. Trainer Chad Brown said, "I think we have a really exciting filly moving forward. If we avoid Songbird, I think we'll win lots of big races. She's a lightly raced horse and her best days are yet to come. From the 1/2 to the 3/8 pole, I said, 'we're really winding up and these horses are coming back to us fast. Maybe we have a shot in the lane if Songbird gets a little leg weary.' But she showed her class and kicked again. It was a very easy work for Songbird. It was an honor to run second to her."

The fillies break from the gate for the Alabama Stakes (G1). 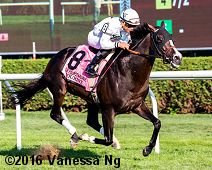 Immediately before the Alabama, a field of 6 older horses contested the $500,000 Fourstardave Handicap (G1) at 1 mile on the inner turf course. Kilroe Mile (G1) winner Ring Weekend was sent off as the 5-2 favorite off his close second in the Dixie (G2). In to challenge him included 11-4 second choice Tourist, second in the Shoemaker Mile (G1) last out, and 7-2 third choice Force the Pass, second in the Forbidden Apple and the Poker (G3).

Jockey Irad Ortiz Jr. sent 8-1 King Kreesa to the front first time by through fractions of 24.53 and 48.43 over the firm going while pressed by Tourist and stalked by Grand Arch. On the far turn Tourist poked his head in front through 3/4 in 1:11.70. Kept to task by Joel Rosario, Tourist cruised to a 1 1/4 length win over 11-2 A Lot in 1:34.29. It was another 1 1/2 lengths back to 9-2 fourth choice Grand Arch third, while favorite Ring Weekend was last. Javier Castellano aboard A Lot claimed foul against Rosario for interference but the claim was disallowed. 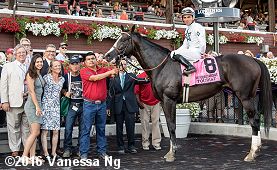 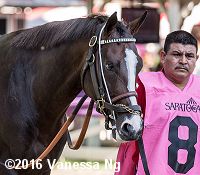 Left: Tourist in the winner's circle. Winning trainer Bill Mott said, "He was very impressive. He had a good trip. Looking at the race, on paper, that looked like the type of trip he would probably get. He was laying second, came on, drew away from the field, and ran very well. There was a bit of an anxious moment in the middle of the turn, he took a bad step. I swallowed [hard] there for a second, but he was able to pick himself back up and go on with it. Once he straightened up for home it looked like he still was traveling well."

Right: Tourist in the paddock. Winning jockey Joel Rosario said, "It was a good trip. He's a nice horse and really put in a nice run. It was all him today. I remember his first time here he really ran a big race before. That was a big performance from him here today. I never thought anything about the inquiry. I just did the best I can. I don't think it impacted the race." 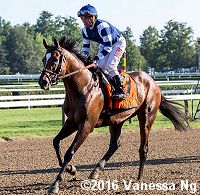 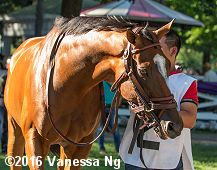 Left: Second place finisher A Lot returns after the race. Jockey Javier Castellano said, "Unfortunately when my horse broke from the gate, (Tourist) came in on my horse. I didn't expect to be that far behind.  I was supposed to be closer to the pace and it caused me to change my strategy for the race. I was too far behind and got beaten by a length."

Right: Third place finisher Grand Arch in the paddock before the race. The Brian Lynch trainee improved his record to 7 wins, 6 seconds, and 9 thirds in 27 starts, earning $1,888,230 for owners Jim and Susan Hill. 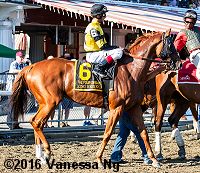 Last place finisher and beaten favorite Ring Weekend heads out for the post parade. The Graham Motion trainee has a record of 5 wins, 4 seconds, and 2 thirds in 16 starts, earning $1,155,410 for owners St. Elias Stable and West Point Thoroughbreds.

Previous winners of the Troy Stakes 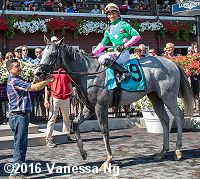 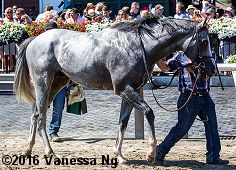 Left: Disco Partner in the winner's circle. Winning trainer Jim Ryerson said, "With 5 1/2 furlongs, he probably has to lay a little closer than he would like, but Jose [Ortiz] did a great job and got him up, and that is all that counts. I told him to try to get him in the clear for the run. He's not the type of horse you want to pick your way through while saving ground and waiting for a seam. He really has to get that momentum sweeping off that turn. That seems like his best race."

Right: Disco Partner heads back to the barn after the race. Winning jockey Jose Ortiz said, "Today we broke very clean. We took a good position and had a perfect trip. You have to give Jim all the credit, he had him trained well. I'm very happy that I could get it done for him. There was some speed in there. He broke really clean, that was our concern. He had broke poorly before, but we got it done."