The $400,000 Beldame Stakes (G1) features older fillies and mares going 1 1/8 miles around one turn of the main track at Belmont Park as a final East Coast prep for the Breeders' Cup Distaff. Conditions were typical for October on Long Island with overcast skies and temperatures in the low 60's, with earlier rains downgrading the main track to muddy and the turf to yielding. Apple Blossom (G1) winner Forever Unbridled was sent off as the 3-4 choice in the field of 7 off her 2nd place finish in the Ogden Phipps (G1) and third in the Personal Ensign (G1). In to challenge her included 7-2 second choice Off the Tracks, winner of the Mother Goose (G1) but 4th in the Prioress (G2), and 5-1 third choice Going for Broke, second to Songbird in the Alabama (G1).

Jockey Luis Saez sent 22-1 Paola Queen to the lead exiting the chute and she set fractions of 24.34, 49.03, and 1:14.06 over the muddy main track while pressed by Off the Tracks and stalked by 15-1 Tiger Ride. Entering the lane, Paola Queen tired and faded to finish last, while Forever Unbridled, 5 wide into the stretch, rallied past tired horses and quickly opened up a 3 length lead at the 1/8 pole through 1 mile in 1:38.07. Kept to task by Joel Rosario, Forever Unbridled cruised to a 2 1/4 length victory over Tiger Ride in 1:50.24. It was another 2 3/4 length back to 9-1 Penwith third. 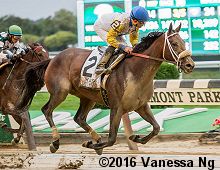 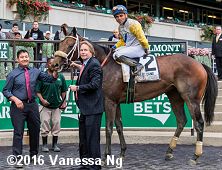 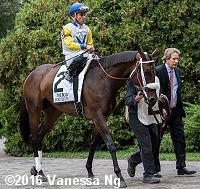 Left: Forever Unbridled in the winner's circle. Winning trainer Dallas Stewart said, "I almost had her on a van and got her out of here. They said like three inches of rain and you don't want to get into a bad racetrack going into the Breeders' Cup but they kept changing the forecast, things got better. So, thank God, we left her here. The track superintendent did a great job with how good the track looks. This filly, I think there's more to come, I really do. I just think she's going to get better and better and hopefully we'll get to run her next year. She's just a great race mare. She's tough, she really is. So long as she comes back good and everything's good [she'll run in the Breeders' Cup Distaff], it's a great race and we're going to be right in there with them and give them a fight. There's going to be a lot of tough horses in there, and she's one of them."

Right: Forever Unbridled heads out of the paddock. Winning jockey Joel Rosario said, "It was a good trip. She's not quick [out of the gate] but she broke OK. I ended up being very close to the lead because they were going very slow. I was just trying to take my time with her, not turn her loose and stay on the outside. I could feel she was getting over the track very good. She was taking me there nicely and I was pretty much just a passenger. She was doing everything on her own." 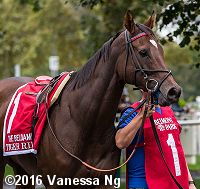 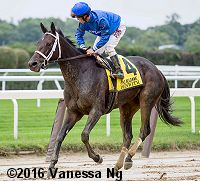 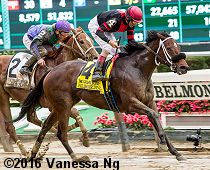 The $300,000 Gallant Bloom Handicap (G2) featured a field of 6 older fillies and mares sprinting 6 1/2 furlongs on the main track, in a final prep for the Breeders' Cup Filly and Mare Sprint. Vagrancy Handicap (G3) winner Paulassilverlining was sent off as the 9-5 favorite off her close seocnd in the Honorable Miss (G2) but 5th in the Ballerina (G1) last out. In to challenge her included 2-1 second choice Wonder Gal, an allowance winner after finishing 5th in the Barbara Fritchie (G2), and 7-2 third choice Wavell Avenue, defending Breeders' Cup Filly and Mare Sprint (G1) champion and 2nd in this race last year, but 6th in the Ballerina last out.

Jockey Manuel Franco sent 11-1 Momameamaria to a 2 length lead down the backstretch through fractions of 22.58 and 45.33 while pressed by Wonder Gal and stalked by Paulassilverlining. Entering the stretch Paulassilverlining moved 6 wide for room to gain a short lead through 3/4 in 1:09.46. Under confident handling by John Velazquez, Paulassilverlining outfinished late-running 4-1 fourth choice Quezon for the 3/4 length win in 1:15.92. It was another 1 1/2 lengths back to Wavell Avenue third. 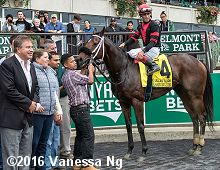 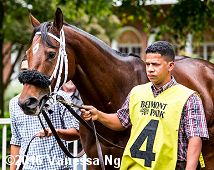 Left: Paulassilverlining in the winner's circle. Winning trainer Michelle Nevin said, "I am extremely pleased. She ran great. Johnny gave her a great ride. I'm very happy. I'm always expecting her to run well. She always tries. I don't see why she shouldn't go to the Breeders' Cup. This filly has shown up all year, except her last race when she was only beaten two lengths and she might not have gotten the trip she really wants. We'll have to discuss things and see what happens."

Right: Paulassilverlining in the paddock before the race. Winning jockey John Velazquez said, "She made me look good. I should have stayed inside. The horse in front of me started drifting just when I started going out. Then I had to go back inside and close the hole. It all worked out. She held on and made me look good." 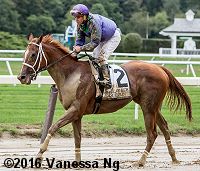 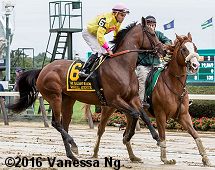