The $600,000 Apple Blossom Handicap (G1) is the major race for older fillies and mares at Oaklawn Park, kicking off closing weekend at the historic Hot Springs oval. An estimated 18,500 were on hand on Friday afternoon for this 1 1/16 mile trip under partly cloudy skies and temperatures in the low 70;s, with 2014 Breeders' Cup Distaff (G1) winner Untapable, winless since last year's Apple Blossom (G1), sent off as the 9-10 favorite in the field of 6 off close second place finishes in the Spinster (G1) and Azeri (G2). In to challenge her included 5-2 second choice Tara's Tango, winner of the Santa Maria (G2) and Santa Margarita (G1), and 4-1 third choice Forever Unbridled, winner of the Comely (G3) and Houston Ladies' Classic (G3).

Jockey Florent Geroux sent Untapable to the front first time by and she set fractions of 24.06, 48.10, and 1:12.45 over the fast main track while pressed by 20-1 Streamline and stalked by Forever Unbridled. Entering the stretch, Untapable tired as Streamline inherited the lead through 1 mile in 1:36.88. However, Forever Unbridled came out for room into the lane and ran right by Streamline to win going away by 2 1/4 lengths in 1:43.08. It was another 1 1/4 lengths back to Tara's Tango third, and a head more to Untapable fourth.

Also check out Creator winning the Arkansas Derby and Effinex winning the Oaklawn Handicap during the Racing Festival of the South at Oaklawn. 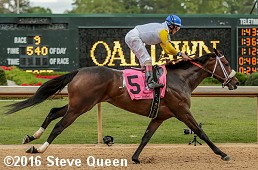 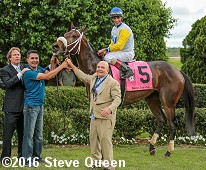 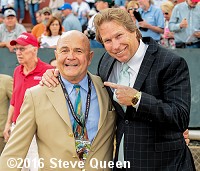 Left: Forever Unbridled in the winner's circle. Winning trainer Dallas Stewart said, "She ran great today and beat a bunch of great fillies. We've got great hopes for the rest of the year. We just need to keep her sound and healthy. Her sister won a Grade 1. Her mom did. But I really think this is a really good horse. She's something special. Her last three races have been over three different race tracks. She won at Aqueduct, she won at Houston, she trained at the Fair Grounds, she ran here, she won here. That takes a special horse."

Right: Winning owner-breeder Charles Fipke and trainer Dallas Stewart celebrate after the race. Fipke said, "It was her day. There were some great horses in there also, so we were just lucky today." 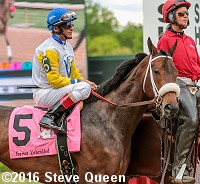 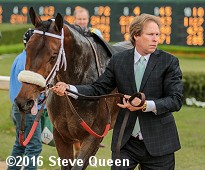 Left: Forever Unbridled post parade. Winning jockey John Velazquez said, "We got a nice position into the first turn once I got her to the outside. I wanted to put a little pressure on (Streamline) so she'd put a little pressure on (Untapable). I know she's a nice horse and we didn't want to let them go too easy either. My horse was doing it easy. I didn't have to ask her to do anything. By the time we came to the last turn I kind of let her out a little bit and she kind of got lost a little. I took my time and let her get engaged in the bridle again. When she got into the bridle in the lane, I showed her the whip and she responded right away. She's a filly that gets better and better with each start. I'm glad I got to ride her today."

Right: Trainer Dallas Stewart leads Forever Unbridled back to the barn after the race. 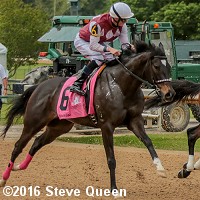 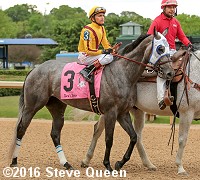 Left: Second place finisher Streamline shortly after the start of the race. Trainer Brian Williamson said, "You can't ask for more than that. I told Chris to let her bounce out of there. If you happen to find yourself on the lead, don't worry about it. We've won on the lead before. It was nice to have the outside post, where you can clock everything inside of us. She's a nice filly. About the quarter-pole, I knew had Untapable." Jockey Chris Landeros added, "She ran big. It was a beautiful run, great trip. She's an awesome mare. I just hope I had 20 more like her to ride. Props to Brian and his team."

Right: Third place finisher Tara's Tango in the post parade. Jockey Rafael Bejarano said, "We had a good trip, but my horse was never confortable. My horse just kept jumping around." 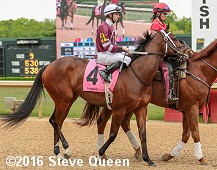 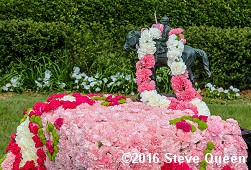 Left: Fourth place finisher and beaten favorite Untapable in the post parade. Trainer Steve Asmussen said, "Very disappointing. There was no speed in the race at all. She's a free-running horse: 24, 48, not more. She didn't win, but I don't think the pace had anything to do with it." Dave Fiske, racing manager for owner Winchell Thoroughbreds added, "You kind of expect her to go on. I don't know. Who knows? Inexplicable."

Right: The trophy and flowers for the Apple Blossom before the race. Florent Geroux aboard Untapable (post 4) said, "I made the lead and it wasn't what I really wanted to do, but it is how the race unfolded. I tried to kick home from the other horses but for some reason I couldn't hold them off in the end. I don't know." 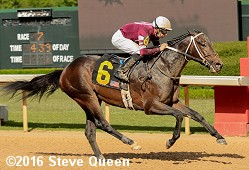 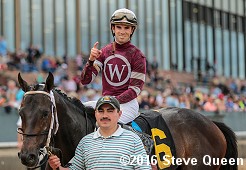 An hour before the Apple Blossom, a field of 7 three-year-olds sprinted 6 furlongs in the $150,000 Bachelor Stakes. Jockey Jon Court sent 13-2 Will Munnings to the lead exiting the chute and he set fractions of 21.11 and 44.80 while pressed by 3-2 favorite I Will Score and stalked by 12-1 Titanium Point. Will Munnings continued to lead to midstretch through 5 furlongs in 57.63 but faded in the final furlong. 7-2 third choice Counterforce, 6th early, rallied on the outside to win going away by 2 lengths over I Will Score in 1:10.68. It was another length back to 14-1 Texas Chrome third.

Winning trainer Steve Asmussen said, "He's a very talented horse. We put three races in him a little close together, but obviously he's going to have a nice future. We'll give him a little break off of that. He'll go to Churchill right away. He won't run Derby Week. I would expect him to run further next time. I say that knowing that there's a possibility that he'd show up (in the Chick Lang on Preakness day) or the Woody Stephens (on Belmont undercard). I think it would be hard to go from here to the Woody Stephens without a little more seasoning."

Winning jockey Florent Geroux added, "He broke very sharp and I was able to save ground and save some horse. They went plenty fast early on. My horse just kept following them When I tipped him out turning for home, he kicked on very nicely. I never seen him in my life. Very good impression. I'd seen his two previous races on TV. He seemed a very nice horse and number-wise he was almost the fastest in there. Looks like he's got a bright future."