The highlight race of the Oaklawn Park spring meeting is the $1 million Arkansas Derby (G1), for 3-year-olds run at 1 1/8 miles on closing day and worth 100 points in the Kentucky Derby Championship Series. The estimated 65,000 fans enjoyed cloudy skies and temperatures in the mid 60's at the historic Hot Springs oval. Cupid was sent off as the 4-5 favorite off his win in the Rebel Stakes (G2), the main local prep for this event. In to challenge him in the field of 12 included 11-2 second choice Suddenbreakingnews, fifth in the Rebel after winning the Southwest Stakes (G3), and 6-1 third choice Whitmore, runner-up in both the Southwest and the Rebel.

Jockey John Velazquez sent 14-1 Gettysburg to the front first time past the stands and he set fractions of 22.81, 46.33, and 1:10.61 while pressed by Cupid and stalked by 12-1 American Pioneer. Due to the fast early pace, the three leaders all tired at the top of the stretch out of contention. 12-1 Creator, last for 5/8 mile, came through between horses to lead at the 1/8 pole through 1 mile in 1:37.48. Kept to task by Ricardo Santana Jr., Creator drew off to win by 1 1/4 lengths over late-runnig Suddenbreakingnews in 1:50.14. It was another 1 1/2 lengths back to Whitmore third, while heavy favorite Cupid faded to 10th beaten 11 1/4 lengths.

Also check out Forever Unbridled winning the Apple Blossom and Effinex winning the Oaklawn Handicap during the Racing Festival of the South at Oaklawn. 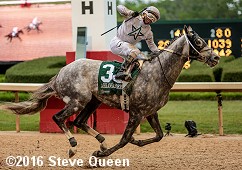 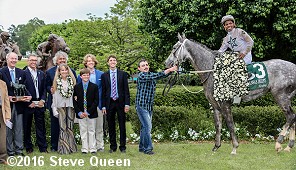 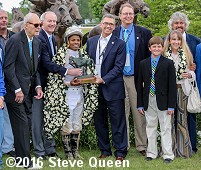 Left: Creator in the winner's circle. Winning trainer Steve Asmussen, celebrating his third Arkansas Derby win, said, "Ricardo has a ton of confidence in the horse and I'm glad to see him rewarded for how much he believed in the horse. His race in the Rebel (third) was good and we felt like he came out of it good. He had a little break and came out for the Arkansas Derby training great. I am very proud of the outcome today. Obviously, we want him to come out of it very good. With him doing better at longer distances, it's easy to dream about the Derby."

Right: Arkansas Governor Mike Beebe presents the trophy for the Arkansas Derby with President of Oaklawn Park Charles Cella on the far left. Elliott Walden, president and CEO of owner WinStar Farm said, "He's been a very high strung horse in the beginning. I liked what Steve had done with some of the Tapits he's had in the past. So that's why we sent Creator to him. Didn't want to send him to New York to where he'd run with the big guys. We felt like he was the kind of horse that if you pressed him too hard too early he might come apart on you. I love his style. I love the way he's been brought along. I think based on today's performance that he would have a very good chance (in the Kentucky Derby)." 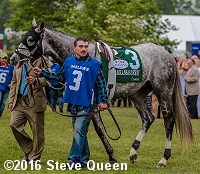 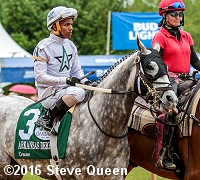 Right: Creator in the post parade. Winning jockey Ricardo Santana Jr. said, "This is a really nice horse. The first time he run here and broke his maiden, he run really good. He had a really good trip but I had to go wide. He make a nice run in the end. Last time it was 14 horses, today it was 12 horses. Steve told me to be patient because you're going to have a lot of horses. It worked out worked out really good. I hope I have the same trip in the Kentucky Derby." 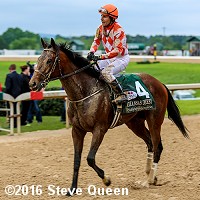 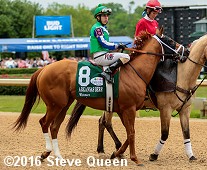 Left: Second place finisher Suddenbreakingnews returns after the race. Jockey Luis Quinonez said, "We finally got a decent trip. I felt like he wasn't handling the track, like he was climbing. In the middle of the turn for home I didn't think he was going to run anywhere but I got him clear and he gave me a great finish. If he would've gotten ahold of the track he would've run right on. He ran well, no excuses. I'm excited and proud of this horse."

Right: Third place finisher Whitmore in the post parade. Trainer Ron Moquett said, "After the replay, I was glad to see how good he was. He nearly went down. About 100 yards out, the outside horse came over on him and he stumbled and nearly went down. Thank goodness he didn't (grab a quarter). We belong in the Kentucky Derby. Today, Creator got the better trip. (Whitmore) is not a ‘hanger' or all that stuff. He keeps overcoming every race." 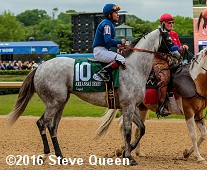 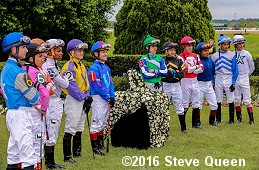 Left: Tenth place finisher and beaten favorite Cupid in the post parade. Jockey Martin Garcia said, "It wasn't his day today. He was too excited. I was trying to save him and tried to get a position with him. I started on the rail and slowly moved him out and was 2nd. When I asked him to go at the 3/8 he wasn't responding. We had nowhere to go. I asked him and he didn't respond." Jimmy Barnes, assistant to trainer Bob Baffert added, "We were done early, basically. I think the fractions probably took a toll on us. But that's racing. I know Martin wanted to get him in the clear, which he did. But, unfortunately he got in the clear and they were rolling right along."

Right: The jockeys for the Arkansas Derby pose with the trophy and flowers in the winner's circle before the race. Jockey Irad Ortiz Jr. aboard Whitmore said, "He always breaks sharp, a couple of horses tried to get to the rail pretty quick in front of me and I was in between horses and I clipped heels. I think they cost me a better position and unfortunately cost me a better position down the stretch. Maybe I could've got 2nd but things happen. That's horse racing. He's still a nice horse with full of potential. He's such a honest horse as well. He comes to run not matter what. If we would've had a cleaner trip, we might have had a better finish." 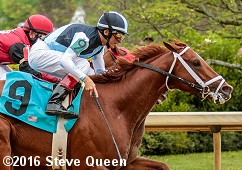 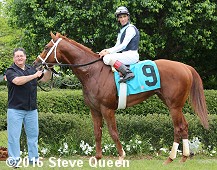 Winning jockey John Velazquez said, "We broke decent enough and we were a little bit wide in the first turn. There were a lot of horses in front of me headed into the backstretch. I wanted to put him in the clear but was too far out. But I got around them and I put him into position and I got him going forward. He did it pretty nicely."