2017 Road to the Kentucky Derby and Oaks Points 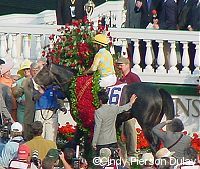 The Kentucky Derby is on May 6, and the contenders are finished earning points in the prep races across the country. Since the Derby field is limited to 20 entrants, there has to be a method for determining which of the many horses who want to enter can get in the race. In the past, graded stakes earnings were used to determine who will get in the field when entries are taken, but many people disliked this system since one good race as a 2-year-old could get a sub-par horse in over a more talented late bloomer. Since 2013, a new points system called the "Road to the Kentucky Derby" where a specific series of 36 prep races each worth a specific amount of points has decided which horses get in the Derby. A similar system is also in place for the Kentucky Oaks run on May 5, but fillies who want in the Derby will have to compete in with the colts for Derby points. While those Derby points earned by fillies will also count toward the Oaks, Oaks points will not count towards the Derby.

Below is a list of horses in order of points earned for both the Kentucky Derby and Kentucky Oaks as of April 24. All the point earning preps are over so this is the final list, but expect a few to drop off due to illness or injury and there are a couple of horses not nominated to the Triple Crown who could still supplement. Also included for comparison are their earnings in non-restricted stakes races which also serve as a tie-breaker. There is also a separate Japan Road to the Derby (now complete) which guarantees a spot to one horse from Japan, if they opt to come for the Kentucky Derby.

ROAD TO THE KENTUCKY DERBY

ROAD TO THE KENTUCKY OAKS