Kentucky Oaks Day on Friday usually draws the second largest attendance of any raceday in North America, second only to the Kentucky Derby run the very next day. Five graded stakes were contested over the sloppy main track and good turf course on the Oaks undercard. Conditions were poor with steady rain and temperatures in the low 50's, with 105,100 fans in attendance.

The first Grade 1 stakes of the Churchill Downs meeting is the $300,000 La Troienne Stakes (G1) for older fillies and mares going 1 1/16 miles on the main track. Madison (G1) third place finisher Paid Up Subscriber was the even-money favorite in the field of 8 over 7-2 second choice Eskenformoney, second in the Azeri (G2), and 5-1 third choice Go Maggie Go, unraced since 11th in the Falls City Handicap (G2) in November. 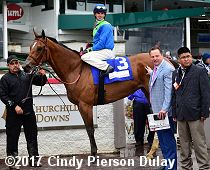 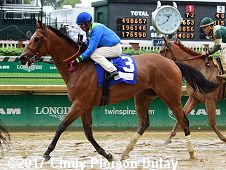 Left: Big World in the winner's circle. Winning trainer Tom Amoss said, "I saw some speed in the race, so I left it up to Florent. He made the front end and was able to control it up there, and that made all the difference. I've had her all winter long. I can't thank Maggi Moss enough to have the opportunity with this filly. She's responsible for buying this filly, not me. We just put her in the right spots. I know (Moss) would say that this is one of biggest moments of her career."

Right: Big World heads to the winner's circle. Winning jockey Florent Geroux said, "Tom left it up to me (whether to go to the lead). She broke good, got to the lead and I saved as much as I could on the backside. When I asked her turning for home, she was there for me and very brave all the way to the wire."

The $200,000 Eight Belles Stakes (G2) featured a full field of 14 three-year-old fillies sprinting 7 furlongs on the main track. Fantasy (G3) fifth place finisher Benner Island was sent off as the lukewarm 3-1 favorite over 7-2 undefeated allowance winner Florida Fabulous and 4-1 Union Strike, winner of the Santa Paula. 16-1 Lovely Bernadette led out of the chute through an opening quarter of 22.54 before Benner Island took over through a half in 45.78. Benner Island with jockey Javier Castellano led into the stretch through 3/4 in 1:11.23, and was all out to hold off late-running Union Strike by a head in 1:24.28. It was another 1 1/2 lengths back to 49-1 Laney third. 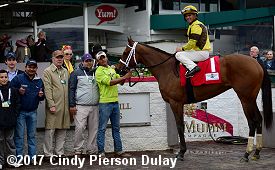 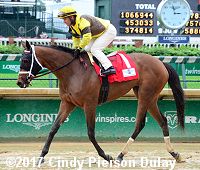 Left: Benner Island in the winner's circle. Winning trainer Brad Cox said, "She was taking Javier up the backside and when I saw the 22 and change I didn't mind that, but when I saw 45 and change (for the half-mile) I didn't like that. But, honestly, turning for home I thought she would back up on the fractions. Knowing the filly, I knew she would fight and was fit. She's running back on three weeks and had two solid works since. It was a big effort and a great job. The Acorn would be ideal for her next, but we'll let her tell us. She hasn't had a tough campaign, but she's been running steady for three months, so we'll see how she comes out. I think one turn is what she is best at."

Right: Benner Island returns to the barn. Winning jockey Javier Castellano said, "The track is a little speed favoring and I used my horse a little bit early to put her in a good position, especially considering the race was 7/8. She fought very hard down the stretch and I know once I was past the wire that I was confident she stayed in her path."

The $150,000 Twin Spires Turf Sprint (G3) featured a field of 10 older horses sprinting 5 furlongs on the Matt Winn Turf Course. Breeders' Cup Turf Sprint (G1) runner-up Pure Sensation was the 3-2 favorite over 3-1 Green Mask, second in the Shakertown (G2), and 5-1 Holding Gold, winner of the Shakertown. Jockey Rafael Bejarano sent 23-2 Latent Revenge to the lead down the backstretch and around the turn through fractions of 22.69 and 46.29 while pressed by 40-1 Tell All You Know and stalked by Pure Sensation and Green Mask. Latent Revenge opened up by 2 lengths midstretch but Green Mask, 7 wide under Javier Castellano, rallied to win by 2 lengths in 58.02 over the good going. It was another 1 3/4 lengths back to 8-1 Why Two third, and another 1 3/4 to favorite Pure Sensation fourth.
Results chart from DRF 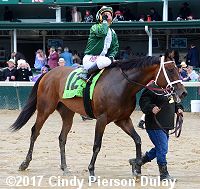 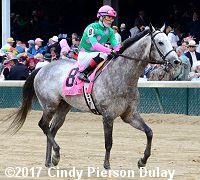 Left: Green Mask heads to the winner's circle. Winning trainer Brad Cox said, "Javier did exactly what he was supposed to do – sitting on the outside and let the speed get away. He let him settle in mid-pack sitting off the pacesetters, which was probably a good thing being on the outside today with the turf draining down to the inside. This is the first time we've run him at 5/8 mile. It didn't seem to bother him at all. He took to it." Jockey Javier Castellano added, "I was outside the whole way. He handled the turf really well. He was nice and smooth, put me in a good spot. I never rode the horse before. About the 1/8 pole I saw the horse in the lead and I thought, man, I'm riding too patient, I have to go. But I timed it right."

The $400,000 Alysheba Stakes (G2) featured older horses going 1 1/16 miles on the main track. Haskell (G1) and Travers (G1) runner-up American Freedom was the 3-2 favorite in the field of 10 over 7-2 Breaking Lucky, second in the New Orleans Handicap (G2) and 9-2 Honorable Duty, winner of the New Orleans Handicap. Jockey Julien Leparoux sent 13-2 Bird Song to the front first time by and he set fractions of 23.23, 46.78, and 1:11.11 while pressed by American Freedom and stalked by Honorable Duty. Entering the stretch Bird Song opened up a 2 length lead through 1 1 mile in 1:37.30. Honorable Duty attempted to close to no avail as Bird Song held him off by 1 1/2 lengths in 1:44.34. It was another length back to late-running 20-1 International Star third, and 1 1/4 more to favorite American Freedom fourth. 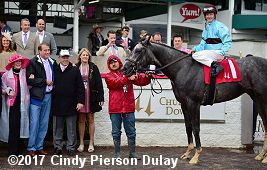 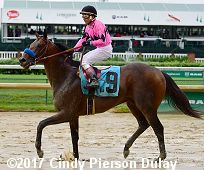 Left: Bird Song in the winner's circle with owner Marylou Whitney at far left. Winning trainer Ian Wilkes said, "The horse has got a world of talent. He has a high cruising speed and last time the track just played against him but they have to be able to overcome that. Today the speed's been pretty generous and that helped him a little bit. I thought there was a ton of speed. I was really concerned. I told Julien, ‘You've got to ride your race. There's a ton of speed in here and I don't know what's going to happen, you've just got to ride.' I don't think he'll be a 1 1/4 horse but I think we can get a good 1 1/8. I'll look at the Stephen Foster."

The $150,000 Edgewood Stakes (G3) featured a field of 13 three-year-old fillies (12 betting interests) going 1 1/16 miles on the turf. The two-horse entry of Appalachian (G3) winner La Coronel and Herecomesthebride (G3) winner Dream Dancing was sent off as the even-money favorite over 9-2 Stallion Heiress, winner of the LaCombe Memorial, and 7-1 Proctor's Ledge, third in the Appalachian. Stallion Heiress was quickest away through fractions of 23.75 and 48.68 while pressed by 22-1 Sweeping Paddy and stalked by 10-1 Indian Mantuana. Down the backstretch Sweeping Paddy gained the lead through 3/4 in 1:13.95 and 1 mile in 1:39.35. Into the lane, Dream Dancing, 11th early, moved up to gain a short lead but entrymate La Coronel, 9th early under Florent Geroux, rallied 8 wide to get up by 1/2 a length in 1:45.56. It was another 2 3/4 lengths back to Sweeping Paddy third. 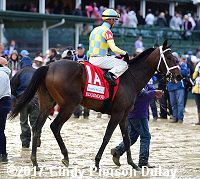 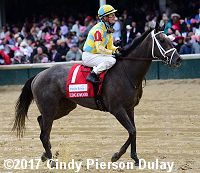 Left: La Coronel heads to the winner's circle. Winning jockey Florent Geroux said, – "I was wide and the post (12) was a killer today. She overcame it, though. My filly showed a lot of fight. I saw Julien (Leparoux) get through on the inside and thought he might get away (on Dream Dancing), but my filly saw her and went for it." 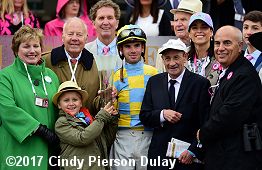 Owners John and Debby Oxley (left) and trainer Mark Casse (right) with the Edgewood trophy. The Oxleys and Casse also sent out Dream Dancing, who will run next in the Belmont Oaks. Casse added, "Dream Dancing ran great. Julien (Leparoux) last time said, I'm going to beat her next time.' I said, ‘I don't know about that.' She's a very nice filly too. We're looking at the Belmont Oaks (GI on July 8). I just got to figure out how to get there. I think Dream Dancing will like a mile and a quarter."

Winning trainer Mark Casse said, "I was already to run La Coronel against colts until she drew the bad post. I never intended to run her today." said Casse. "But we want to take her to (Royal) Ascot (for the Queen Anne), so I figured maybe trying her on a course with a little give in the ground would be a good idea. I wasn't concerned about her handling the wet course, what I was concerned about was her being wide around the first turn, wide down the backside and wide around the final turn. But she's so good, she was able to overcome it."