Kentucky Derby Day is the biggest card of racing at Churchill Downs. Before the main event, there were six graded stakes contested over the main track and turf course before the 158,070 fans who came out on Saturday. Due to the steady rain Thursday and Friday, the main track was sloppy initially, later upgraded to wet-fast, while the turf was good. In contrast to Oaks day the weather cooperated somewhat, with early light rain giving way to partly cloudy skies, some intermittent showers, and temperatures near 60. 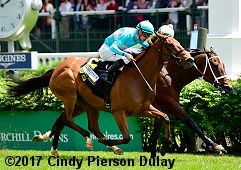 The $300,000 Churchill Distaff Turf Mile Stakes (G2) featured a field of 7 older fillies and mares going 1 mile on the turf. Matriarch (G1) runner-up Roca Rojo was sent off as the 6-5 favorite over 3-1 Believe in Bertie, winner of the Red Camela and Daisy Devine, and 7-2 Linda, third in the Honey Fox (G2). Jockey Shaun Bridgmohan sent Believe in Bertie to the lead first time by through fractions of 25.23, 49.20, and 1:12.91 over the good going while pressed by Roca Rojo and stalked by 15-1 Mississippi Delta. Entering the stretch, jockey Florent Geroux moved Roca Roja out 4 wide for room and she swept to the lead at the 3/16 through 7f in 1:24.83. Believe in Bertie moved back to challenge but Roca Rojo outfinished her to win by a head in 1:37.53. It was a long 3 1/4 length back to Linda third.
Results chart from DRF 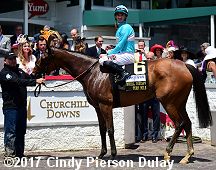 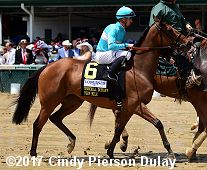 Left: Roca Rojo in the winner's circle. Winning jockey Florent Geroux said, "I was right off the leader (Believe in Bertie). My filly was closer than she usually is. She likes to sit back and make one run, but there was a lack of pace in the race. I decided to put her closer and make sure I wasn't going to be trapped behind. Down the stretch, I thought I had it pretty easily, but the other filly tried to come back at her. My filly was the best."

Right: Roca Rojo heads to the winner's circle. Winning trainer Chad Brown said, "She's been training really well. We knew she could handle the soft going. She's equally as good on firm. We were a little concerned about the pace and it played out that way. It was a soft pace with a very good horse setting the fractions, a really solid horse. She had her work cut out for her to run her down. We'll look at the Just a Game (G1), that makes a lot of sense, in five weeks at a mile at Belmont." 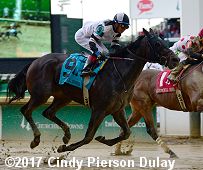 The $500,000 Churchill Downs Stakes (G2) featured a full field of 14 older horses sprinting 7 furlongs on the main track. Breeders' Cup Sprint (G1) and Triple Bend (G1) runner-up Masochistic was the 2-1 favorite over 11-4 Awesome Slew, winner of the Commonwealth (G3) and 13-2 El Kabeir, second in an allowance. Masochistic dueled for the lead with 57-1 Bluegrass Singer through fractions of 22.04 and 44.35 before both tired from the hot early pace. 13-1 Limousine Liberal, who stalked them in third early under Jose Ortiz, inherited the lead through 3/4 in 1:09.86. Awesome Slew, 11th early, came through late between horses but Limousine Liberal held him off by a head in 1:23.22 over the wet-fast main track. It was another 3/4 length back to 20-1 Tom's Ready third, while favorite Masochistic finished 13th.
Results chart from DRF 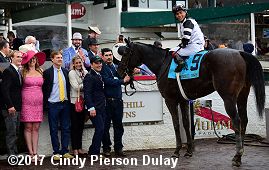 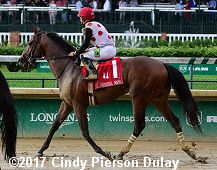 Left: Limousine Liberal in the winner's circle. Winning jockey Jose Ortiz said, "It was perfect. He broke and I used him a little bit to get my position. When I saw (Bluegrass Singer) go with Masochistic, my chances increased a lot because I was in a good spot. When we entered in the stretch, he responded very well. It was a great training job by Ben. He told me to just try to sit two lengths off Masochistic. That's what I did and it worked." Trainer Ben Colebrook added, "It set up for us. It kind of went according to plan for once. The plan was just to follow the two speed horses and try to pounce. We've been waiting to get a wet track and it worked out. This horse has been showing up every time. It's great that he's finally a graded-stakes winner."

Right: Second place finisher Awesome Slew returns to the unsaddling area. Jockey Joel Rosario said, "I got on the inside and thought for a minute I might get there and just missed a little bit. He ran a big race, especially considering he had an inside post position." 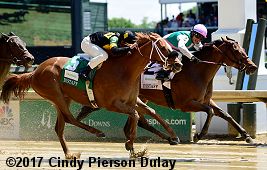 Kicking off the stakes action on Derby Saturday is the $300,000 Humana Distaff Stakes (G1), featuring older fillies and mares sprinting 7 furlongs on the main track. Breeders' Cup Filly and Mare Sprint (G1) (G1) winner Finest City was the 3-2 choice over 2-1 Carina Mia, 9th in the Breeders' Cup Filly and Mare Sprint (G1), and 5-2 Paulassilverlining, winner of the Madison (G1). 27-1 longest shot Super Humor and Paulassilverlining dueled for the lead exiting the chute and down the back through fractions of 23.02 and 46.55 stalked by Finest City in third. On the turn, Super Humor tired allowing Paulassilverlining and jockey Jose Ortiz to take over the lead through 3/4 in 1:10.74. Finest City put in a strong drive late but Paulassilverlining held her off by a neck in 1:23.68 over the sloppy main track. It was another 3/4 length back to Carina Mia third.
Results chart from DRF 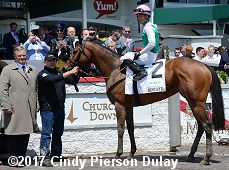 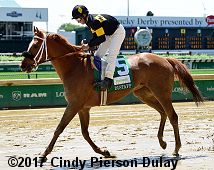 Left: Paulassilverlining in the winner's circle. Winning jockey Jose Ortiz said, "No special instructions from Chad. He said, ‘You know this filly; ride her like you know how.' She was extra game today but she's like that every time. She always shows up and gives her best. She showed up today." Trainer Chad Brown added, "She had no trouble with the track and Jose gave her a great ride. He got her off the rail early, put her in a stalking position and got the jump on everybody."

Right: Second place finisher and beaten favorite Finest City. Jockey Mike Smith said, "Great trip. She kind of slipped more than I'd hoped she would. We all have to run in it and some of them handle it better than others but that might have made a little bit of difference today. Every time I'd take two or three steps forward all of a sudden I was taking one back. She'd hit a little spot and then it'd be like starting all over again."

The $300,000 American Turf Stakes (G2) featured a field of 10 three-year-olds going 1 1/16 miles on the turf. Breeders' Cup Juvenile Turf (G1) winner Oscar Performance was the 5-2 favorite over 3-1 Good Samaritan, winner of the Summer Stakes (G2), and 5-1 Big Score, winner of the Transylvania (G3). Jose Ortiz sent Oscar Performance to the front first time by through fractions of 23.85, 48.46, and 1:13.76 over the good going while pressed by 11-2 Conquest Fahrenheit and stalked by 18-1 Holiday Stone. Turning for home Oscar Performance tired badly and faded to finish last, as Conquest Fahrenheit inherited the lead through 1 mile in 1:38.41. 15-1 Arklow, 7th early under Mike Smith, came out 5 wide into the lane and rallied to outfinish Good Samaritan by a length to win in 1:44.64. It was a head back to Big Score third. 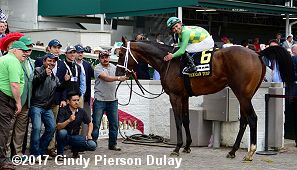 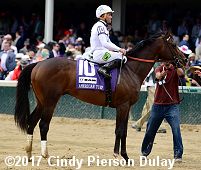 Left: Arklow in the winner's circle. Winning trainer Brad Cox said, " I saw a 1 1/8 maiden race at Keeneland on the grass opening weekend. He ran a big race that day and obviously this was a step up today. He had a great work here last weekend on the turf. It's only the second time he ran on the turf so I was really proud of him how well he ran today." Jockey Mike Smith added, "Brad said don't be afraid to get brave with him. If I got him clear, he said go ahead and let him start going a little early. He said he'd keep going and he was 100% right. Normally on the grass you want to wait and make one run. If I had done that, I probably would have lost the race."

Right: Beaten favorite and last place finisher Oscar Performance returns to be unsaddled. The 5-2 choice set the pace under Jose Ortiz but tired on the far turn to finish 10th beaten 15 lengths. 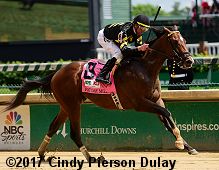 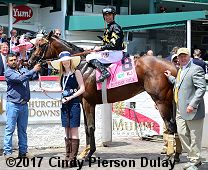 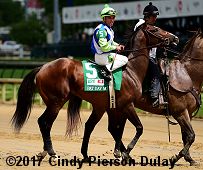 Left: Wild Shot in the winner's circle. Winning trainer Rusty Arnold said, "We tried the Derby trail and we just didn't like the two turns so we backed him up. His last work was brilliant and he'd done really well. We thought he'd like the slop. We weren't sure but we thought he would. They went so much faster than I thought they would but you just don't know on a sloppy track. He kept going and he'd run so fast the horses that chased him tired also." Jockey Corey Lanerie added, "I didn't know where I was going to be the first quarter. I went in with the mind-set to let my horse run his race. I just patiently let him do what he wanted to do. It was a dream ride. When I called on him (at the top of the stretch), he had plenty left."

Right: Second place finisher and beaten favorite No Dozing in the post parade. Jockey Joel Rosario said, "A good race for him. He ran well. The winner was best today." 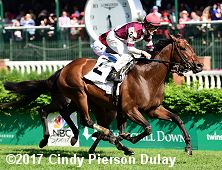 The final stakes of the undercard was the $500,000 Woodford Reserve Turf Classic (G1), a 1 1/8 mile trip over the Matt Winn Turf Course for older horses. A field of 11 went to post with Gulfstream Park Turf (G1) runner-up Beach Patrol sent off as the 3-1 favorite over 7-2 Divisidero, last year's winner, and 5-1 Bal a Bali, winner of the Frank Kilroe Mile (G1). Jockey Florent Geroux sent Beach Patrol to the lead first time by through fractions of 24.51, 50.69, and 1:15.45 over the good going while pressed by 16-1 Enterprising and stalked by 11-1 Cant'helpbelieving. Entering the stretch Beach Patrol continued to lead through 1 mile in 1:40.25 but Divisidero, last early, switched to the stands side into the lane and ran down Beach Patrol late to win by 1/2 a length in 1:52.42. It was another 2 1/2 lengths back to 10-1 Oscar Nominated third.
Results chart from DRF 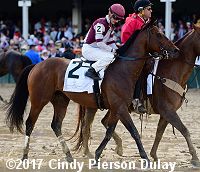 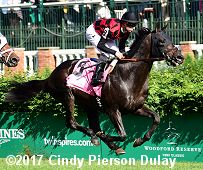 Left: Divisidero in the winner's circle. Trainer Buff Bradley said, "We were far back early, but that's how the horse runs. Julien said there wasn't much pace in there but I didn't want to take the horse out of his race. We know he likes to finish, even on a slow pace. I just told Julien 'you may just have to make your run earlier.' Julien is a great jockey so I don't have to tell him a whole lot. Derby Day has really been good to us. We're always happy to win on Derby Day before the biggest crowds."

Right: Second place finisher and beaten favorite Beach Patrol leading first time by. Jockey Florent Geroux said, "There was not much speed and my horse likes to be forwardly placed. I put him on the lead and it looked like there were comfortable fractions. He was really trying. He saw (Divisidero). I went left-handed a few times and just couldn't keep up with him. Divisidero was too fast for us today. He loves this turf course and does his best running here."