On Saturday, a field of 11 three-year-olds went 1 1/16 miles in the $900,000 Rebel Stakes (G2) at Oaklawn Park, the major local prep for the Arkansas Derby and worth 50 points to the winner as part of the Kentucky Derby Championship Series. 36,000 fans packed the historic Hot Springs oval under overcast skies and temperatures in the low 70's. American Anthem was sent off as the 8-5 favorite off his close second place finish in the Sham Stakes (G3) at Santa Anita. In to challenge him included 3-1 second choice Malagacy, shipping from Gulfstream undefeated in two starts each by open lengths, and 6-1 third choice Petrov, runner-up in his last 3 starts, the King's Swan, Smarty Jones, and Southwest (G3).

Jockey Channing Hill sent 11-1 Uncontested to the lead first time by through fractions of 23.03, 47.04, and 1:11.35 while pressed by Malagacy and stalked by Petrov and 13-2 fourth choice Royal Mo. On the far turn Malagacy and jockey Javier Castellano moved up to take over the lead through 1 mile in 1:36.80. 112-1 longest shot Sonneteer, 10th early, put in a strong late inside rally but was no match for Malagacy who cruised to a 2 length win in 1:43.00 over the fast main track. It was just a nose back to 9-1 Untrapped third, and another nose to Petrov fourth. American Anthem was wide throughout and failed to rally finishing 10th. 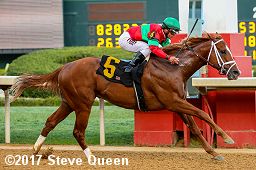 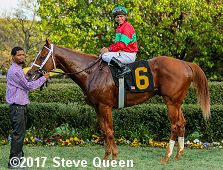 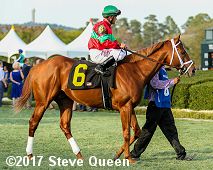 Left: Malagacy in the winner's circle. Winning trainer Todd Pletcher said, "We were trying a new distance and he was stepping up in class against some nice, seasoned horses so I was very pleased with and proud of his effort. We wanted to make sure we got to the first turn in good position. He didn't break super sharply but he was able to recover pretty quickly and get himself into pretty much the spot where we thought he would be, which was tracking Uncontested. The first quarter was solid but then they kind of slowed it down in the second quarter and it was a good honest pace from there on out. The great thing he's got going for him is a beautiful disposition and he's very ratable and he's fast. That's a great combination to have." Pletcher added that he should go in the Arkansas Derby next but will ship back to Palm Beach Downs first.

Right: Malagacy in the infield saddling area. Winning jockey Javier Castellano said, "He doesn't do anything wrong, very impressive the way he did it today. I rode with a lot of confidence. He's such a great horse. Every single race he's been impressive. Todd did a great job with the horse, going long and stepping up in class and he still showed up and won the race. I give all the credit to Mr. Pletcher. The way he did it today, very impressive, I think there's no question he likes to go far. He's well bred, and he has a good trainer and is a joy to ride." 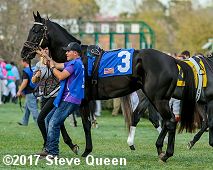 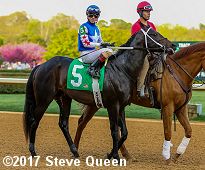 Left: Second place finisher Sonneteer in the infield saddling area. Trainer Keith Desormeaux said, "The horse has been running quality races in California against quality competition. I love the setup, backing up to seven-eighths and then stretching out again. And physically he was doing so well, I had to give him a shot. He showed glimpses with his physical appearance and the way he works effortlessly in a class manner. There's only one Derby, only one time of year to prep them for the Derby. It was time to prove it. We got a favorable trip along the rail. It looks like (Richard) Eramia thought about coming out and opted to stay on the rail. He was getting kind of bogged down, and then the horse to his outside bumped him. Richard said he rebroke when he got bumped, so that's a nice sign."

Right: Third place finisher Untrapped in the post parade. Trainer Steve Asmussen said, "Untrapped looked like he showed the effects of me wheeling him back. He got a little light late, but he's a good horse. We'll plan on staying here for the Arkansas Derby with him. Lookin At Lee, I'll weigh between the Arkansas Derby and the Blue Grass, with him having run well in the Breeders' Futurity there last fall (at Keeneland). Part of it is it's hard to be good enough, and it's really hard to stay around. I think Untrapped will appreciate a little more time between races, but you watch the replay and I'll debate whether putting blinkers on him or not. You can see where he dropped the bridle down the backside, and it forced him to start holding position. But it was his first race here, and the kickback being different. I'll see how he trains, that is an option (blinkers)." 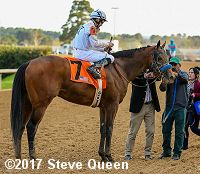 Left: Fifth place finisher and beaten favorite American Anthem returns after the race. Jimmy Barnes, assistant to trainer Bob Baffert said, "He just struggled. He didn't break as sharp as I thought he would. Had a lot of speed in the race, also. Mikey just said he struggled a bit with the track. Regroup and head back to California and keep searching for a Derby horse." Jockey Mike Smith added, "Slipped really bad leaving there in behind and stayed that way the whole race. Just struggled for whatever reason. I was OK as long as we were all slow. As soon as we had to pick it up, I would give him his head, legs just went everywhere."

Kicking off the stakes trio on Saturday, a field of 7 older fillies and mares went 1 1/16 miles in the $350,000 Azeri Stakes (G2), the major local prep for the Apple Blossom Handicap. Last year's Fantasy (G3) winner Terra Promessa was sent off as the 3-10 favorite off her win in the Bayakoa (G3) last out. In to challenge her included 4-1 second choice Eskenformoney, third in the Royal Delta (G2) after winning the Rampart (G3), and 12-1 third choice Streamline, third in this race last year and third in the Bayakoa last out.

Jockey Jon Court sent 22-1 She Mabee Wild to the lead first time by through fractions of 23.71 and 47.41 while pressed by Streamline and stalked by Eskenformoney and Terra Promessa. On the far turn She Mabee Wile tired allowing Streamline to inherit the lead through 3/4 in 1:11.68. Streamline soon opened up a 1 1/2 length lead midstretch through 1 mile in 1:37.00, and easily held off Eskenformoney by a length in 1:43.67. It was another 1/2 length back to 32-1 Tiger Moth third, while Terra Promessa faded to finish fifth. 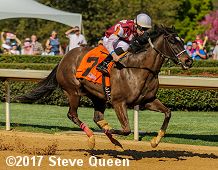 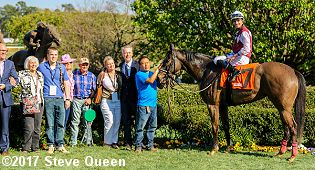 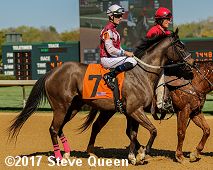 Left: Streamline in the winner's circle. Winning trainer Brian Williamson said, "‘Break good and don't let the favorite get loose on the lead' were my instructions. She broke great. Looked like the favorite didn't break as good and was kind of boxed in. I thought Chris rode her great. If she comes back good and checks out good, we're definitely running in the Apple Blossom."

Right: Streamline in the post parade. Winning jockey Chris Landeros said, "The outside post was kind of in our favor today. I thought Irad (Ortiz Jr. aboard Terra Promessa) was going to go a little bit with his horse. Terra Promessa had the inside and we took advantage of it. She runs hard every time. She deserves a chance every single race. She's little but she's so game. Very, very game mare. I just knew she'd give me 110 percent every time. She's so honest every race." 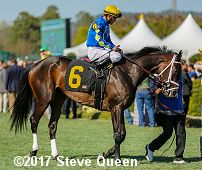 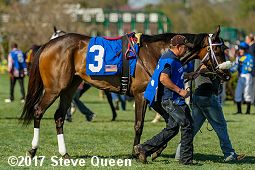 Left: Second place finisher Eskenformoney in the infield saddling area. Jockey Javier Castellano said, "Had a good trip, but that's where I expected to be. I didn't want to be too far out of it today. With that kind of horse you have to be involved in the race, and she did. She gave me good run and the speed carried all the way. I thought the horse was going to come back to me a little bit. Every time I asked my horse she responded very well. I am very proud for the filly and the way she ran."

Right: Third place finisher Tiger Moth in the infield saddling area. Jockey Jose Ortiz said, "She ran very well. Setup nice for me and going into the first turn she relaxed well. She made a run turning for home and she was coming on late. She was rallying on late in the race and it was a good race for her." Trainer Brad Cox added, "It was good. I was very happy with it. Jose did a good job letting her settle into the race. Finished up well. We'll see what happens out of this, maybe go the Apple Blossom." 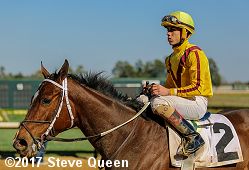 Fifth place finisher and beaten favorite Terra Promessa returns after the race. Trainer Steve Asmussen said, "That was a debacle. You've got to get along with her, you just do. Can't fight with her. She knows who she wants to be, and that was not good." Jockey Irad Ortiz Jr. added, "She just didn't show up."

The $250,000 Essex Handicap features older horses going 1 1/16 miles as a prep for the Oaklawn Handicap. San Antonio Stakes (G2) runner-up Mor Spirit was sent off as the 1-2 favorite in the field of 7 over 9-2 Madefromlucky, third in the Poseidon Handicap, and 11-2 Shotgun Kowboy, 4th in last year's Razorback Handicap (G3) on the same weekend.

Left: Mor Spirit in the winner's circle. Winning jockey Mike Smith said, "I was really happy where I was at. He put me right into the race. I actually was going to try and be a little more aggressive and take the lead. But he was in such a good rhythm where he was, I was happy with that. Heading for home, a horse came up to his outside, he dug in and I just stayed a little busy on him. Just because it's his first time here. You're so close to the crowd here, which is pretty cool but sometimes it will get a horse looking around a little bit. So I just stayed more or less just after him to keep his attention, and he won very nice today."

Right: Mor Spirit in the post parade. Smith added, "I was glad we saddled inside. I've never seen him act that way (rearing up during infield paddock schooling). I think that infield just kind of got him feeling good. Jimmy (Barnes, assistant to Bob Baffert) said he didn't really get hot, he just wouldn't stop rearing up."

Left: Second place finisher Domain's Rap in the infield saddling area. Jockey Ramon Vasquez said, "I just wanted to let him run his race from off the speed a little bit. I waited for my move, and he ran well. My thought was just to sit off the speed and have one move and see what happened. He ran a good race." Trainer Federico Villafranco added, "He ran great, ain't no doubt about it. He's 9 years old. We think the world of him. He's a good horse."

Right: Third place finisher Madefromlucky in the post parade. Jockey Javier Castellano said, "I thought I did finish second. I had a perfect trip. That's where I wanted to be; I didn't want to be too far back. He's that kind of horse. If you take back a little too far, he's just a grinder. He takes a little momentum. He broke well out of the gate, put me in good position. He ran so well. I'm so proud."