On Saturday, a full field of 14 three-year-olds (12 betting interests) went 1 1/16 miles in the $900,000 Rebel Stakes (G2) at Oaklawn Park, the major local prep for the Arkansas Derby and worth 50 points to the winner in the "Kentucky Derby Championship Series". 35,000 fans packed the historic Hot Springs oval under sunny skies and temperatures in the high 50's. Southwest Stakes (G3) winner Suddenbreakingnews was sent off as the 5-2 favorite. In to challenge him included 3-1 second choice Cupid a maiden winner last out at Santa Anita, and 4-1 third choice Whitmore, third in the Southwest.

Jockey Martin Garcia sent Cupid to the lead first time by and he set fractions of 22.96, 46.62, and 1:12.11 while pressed by 20-1 Siding Spring and stalked by 8-1 Madtap. Entering the stretch, Cupid opened up a 1 1/2 length lead as Whitmore, 9th early, was making his 5 wide sweep to challenge. Whitmore rallied well to draw even with Cupid through 1 mile in 1:37.65, but Cupid fought him off to win going away by 1 1/4 lengths in 1:43.84 over the fast main track. It was another 1 3/4 lengths back to 8-1 Creator third, while favorite Suddenbreakingnews checked in fifth. 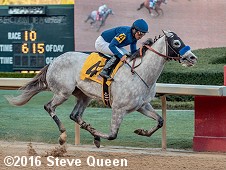 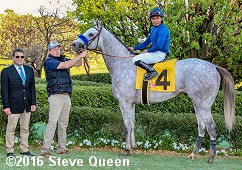 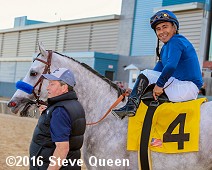 Left: Cupid in the winner's circle. Winning trainer Bob Baffert said, "Turning for home he made that move. I saw that horse rolling down the middle of the track, I thought, ‘Well, we'll see what he's made of.' That's when you start seeing what they're made of, when they kick back in like that. That's what you want to see this time of year, show some grit, show some guts, and he really laid it down. (Martin Garcia) works so hard getting these horses ready and he got the win. I'm happy for the Coolmore gang, too. I knew going in he was a nice horse. But he never had been tested and that was a pretty strong bunch."

Right: Cupid returs after the race. Winning jockey Martin Garcia said, "We needed this race. It's hard for horses to break their maiden and then step up to this kind of company with this many people around and win, but he did. He showed a lot of ability and we know he can run. When we hit the top of the stretch, he got lonely and he locked in on the other horse that was coming up on the outside he responded one more time. He really proved today that he is improving. The distance doesn't matter. He can go as far as he wants." 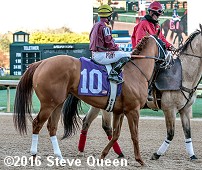 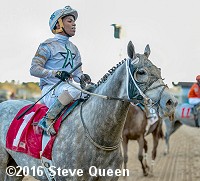 Left: Second place finisher Whitmore in the post parade. Trainer Ron Moquett said, "That horse was able to get his second quarter in 24 seconds. These caliber of horses don't come back from that. When you're a $900,000 Tapit, bred to be what he is, they don't back up. You give them a 24-second quarter, nobody went with him. I thought somebody would go with him."

Right: Third place finisher Creator in the post parade. The 8-1 shot trailed early under Ricardo Santana Jr. then rallied to get third beaten 3 lengths. The Steve Asmussen trainee improved his record to 1 win, 4 seconds, and 1 third in 7 starts, earning $168,320 for owner WinStar Farm. 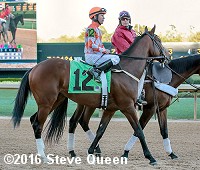 Fifth place finisher and beaten favorite Suddenbreakingnews. The 5-2 choice was 13th early 11 lengths off the pace under Luis Quinonez, then put in a mild bid to get fifth beaten 4 3/4 lengths. The Donnie Von Hemel trainee improved his record to 3 wins, 3 seconds, and 0 thirds in 7 starts, earning $470,032 for owner Samuel Henderson.

The $350,000 Razorback Handicap (G3) features older horses going 1 1/16 miles as the major local prep for the Oaklawn Handicap. Upstart was sent off as the 5-2 favorite in the field of 10 (8 betting interests), unraced since fifth in the Pennsylvania Derby (G2) in September. In to challenge him included 3-1 second choice Carve, third in the Essex Handicap last out, and 4-1 third choice Far Right off an allowance win. 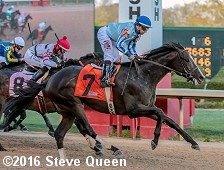 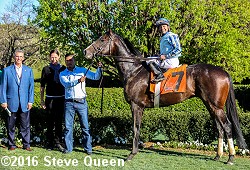 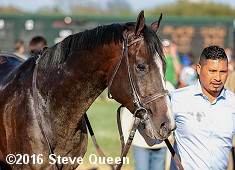 Left: Upstart in the winner's circle. Winning trainer Rick Violette said, "I couldn't be happier. He gave up ground on both turns but he was resolute up the lane. He ran right through. He's back to where we hoped he would be and I'm thrilled."

Right: Upstart heads back to the barn after the race. Winning jockey Joe Bravo said, "When you're off that long, it's tough to get a horse ready to run. He left there really nicely, relaxed really good the first turn. Probably a little farther back than Rick wanted. But, he was so comfortable and relaxed. I was really happy the way he was going. You saw the move he made around the turn. He's back. He's a pretty nice horse. He proved it to everybody. I'm just glad he's a big, happy horse for the rest of the season." 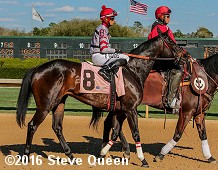 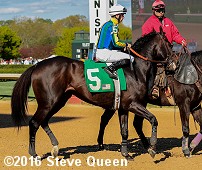 Left: Second place finisher Domain's Rap in the post parade. Trainer Federico Villafranco said, "This horse has been running so good. We tried to get him an easier spot, but we couldn't. We decided to give him a chance to prove himself. If he's still doing good, we'll have to think about the Oaklawn Handicap."

Right: Third place finisher Idolo Porteno in the post parade. Trainer Ignacio Correias said, "My horse ran awesome, just awesome. It was eight months with no racing, his first time in America and his first time around two turns. He was awesome. I don't know yet what we'll do next with him." 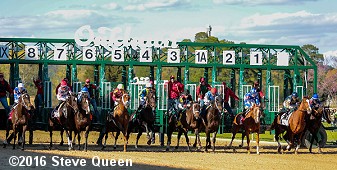 The start of the Razorback Handicap.

Kicking off the stakes trio on Saturday, a field of 8 older fillies and mares went 1 1/16 miles in the $350,000 Azeri Stakes (G2), the major local prep for the Apple Blossom Handicap. 2014 Breeders' Cup Distaff (G1) winner Untapable was sent off as the 2-5 favorite, winless since last year's Apple Blossom and 2nd in the Spinster (G1) last out. In to challenge her included 5-1 second choice Call Pat, winner of the Bayakoa (G3) and 4th in last year's Beldame (G1), and 9-1 third choice Streamline, second in the Bayakoa after winning the Pippin Stakes. 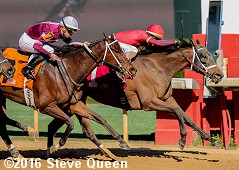 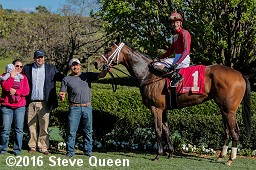 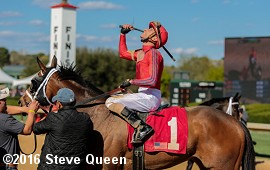 Left: Call Pat in the winner's circle. Winning trainer Brad Cox said, "I was happy to the see the 47. The last time, they went a little bit slower in the Bayakoa. But, we always knows she comes running. I was hoping she wouldn't run out of ground. We just got up, but she ran a great race. Joe Rocco does a great job on this mare. He knows her. He's ridden her at Indiana. He won on her here at Oaklawn, so he obviously knows the mare very well. He knew he couldn't sweep around all those good mares today. Come up the inside, split horses. He did a great job."

Right: Call Pat after the race. Jockey Joe Rocco Jr. added, "It was your typical Call Pat fashion. She falls back there and I just let her do her thing. We just kind of picked our way through there. She's a nice mare. If you conserve her, she comes running." 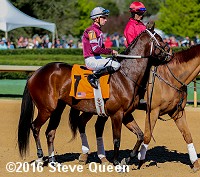 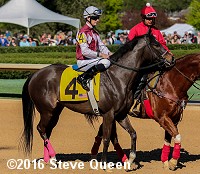 Left: Second place finisher and beaten favorite Untapable in the post parade. She was the beaten favorite in the 2015 running as well. Trainer Steve Asmussen said, "I was disappointed she ran second , but she ran solid. The rider said she lost a little focus and didn't see that filly on the outside (Streamline) and she was kind of looking up. I think she ran well. The winner runs well here and we always know how that is when you come into Oaklawn. It is a horse for course place. She will definitely stay here and train and be pointed for the Apple Blossom next."

Right: Third place finisher Streamline in the post parade. The 9-1 shot was 4th early under Chris Landeros then passed the tiring pacesetter to get third beaten 3/4 length. The Brian Williamson trainee improved her record to 6 wins, 1 second, and 3 thirds in 11 starts, earning $200,276 for owner-breeder Nancy Vanier and Cartwright Thoroughbreds.