Pegasus World Cup day at Gulfstream Park featured ideal racing weather - sunny skies, temperatures in the low 70's, with a fast main track and firm turf. There were 6 stakes races on the undercard, 3 of which were graded. An all-time handle record of $40.217 million was bet on the 12-race card. Gulfstream Park general manager P.J. Campo said, "We are extremely pleased with the inaugural running of the Pegasus World Cup. From early morning until late afternoon, Gulfstream was electric. From the amenities to our guests to the blue carpet to the incredible performance by Arrogate, the inaugural running of the Pegasus World Cup Invitational was incredible. We feel we introduced a number of new fans to the sport of Thoroughbred racing and the great entertainment and amenities at Gulfstream Park on Pegasus World Cup Day. We want to thank the fans who came out, the horsemen who support our program, and the incredible performances by our human and equine athletes."

The $400,000 Poseidon Handicap was run under the same conditions as the Pegasus, at 1 1/8 miles for older horses, with first preference given to Pegasus shareholders. Harlan's Holiday (G3) winner Stanford was the 3-5 favorite in the field of 9 over 4-1 Madefromlucky, 4th in the Harlan's Holiday, and 7-1 Imperative, 6th in the Native Diver (G3). 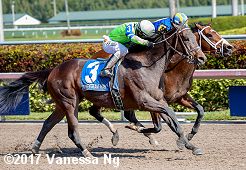 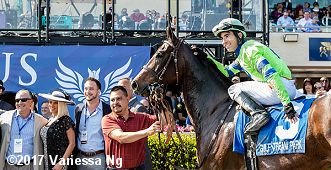 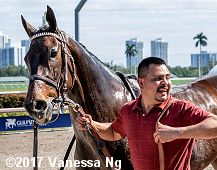 Left: Imperative in the winner's circle. Winning trainer Bob Hess Jr, said, "It's great to compete on the biggest day in racing, and to be able to compete against and beat Todd Pletcher is fun an exciting. Imperative kind of runs with his head up a little so I thought we might have lost the head bob, but luckily he dropped in time. No complaints."

Right: Imperative heads back to the barn. 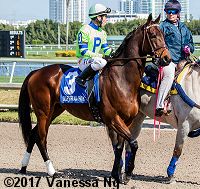 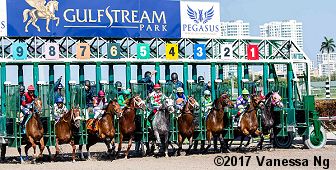 Left: Imperative in the post parade. Winning jockey Antonio Gallardo said, "When I was riding down the back I could have gone in and decided to stay out, and he took the bend really well. I was really confident in him. I'm hungry, and he was hungry."

Right: The horses break from the gate for the Poseidon Handicap. 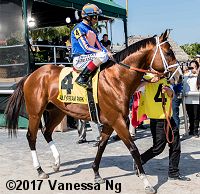 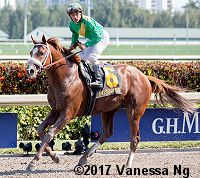 Left: Second place finisher and beaten favorite Stanford heads out for the post parade. Trainer Todd Pletcher said, "It kind of looked like the horse that was on the lead was sort of out in the middle of the track, so John (Velazquez) opted to go inside of him. He ran well. He lost to a nice horse, who has made over $2 million. He's a nice horse. Tough bob." 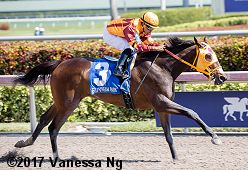 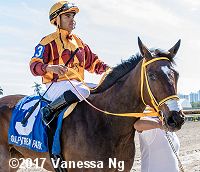 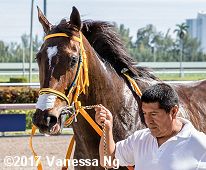 Left: Curlin's Approval heads to the winner's circle. Winning owner-breeder Happy Alter said, "I think this filly will go on and be in the winner's circle in Grade 1 competition. I might try to stretch her out next time, just to give her that opportunity. She's so nice, never tries to bite anyone, a real lady. She can make up what a lot of other horses couldn't. She'd never been that far back before, but she proved she could handle it. This is a great day at Gulfstream and I'm glad to be a part of it."

Right: Curlin's Approval heads back to the barn. Winning jockey Luis Saez said, "She broke good. We got behind the three horses up front and got her to a good spot. I slipped out and once we got to the outside, she started running. I thought we had it at that point." 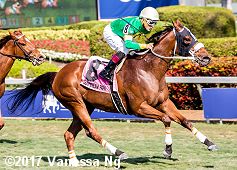 The $125,000 Ladies' Turf Sprint Stakes featured a field of 9 older fillies and mares sprinting 5 furlongs on the turf. Nite Delite was the 5-2 choice over 7-2 Triple Chelsea and 9-2 Everything Lovely. Jockey Javier Castellano sent Everything Lovely to the lead through fractions of 21.27 and 43.67 while pressed by Nite Delite and stalked by 14-1 Pretty Perfection. Everything Lovely opened up a 1 1/2 length lead midstretch but Pretty Perfection and jockey Nik Juarez rallied 3 wide to win going away by 1 1/2 lengths in 55.31 over the firm going. It was a head back to Triple Chelsea third, while Nite Delite was another 1 1/4 lengths back in fourth. 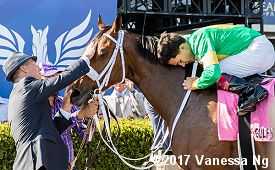 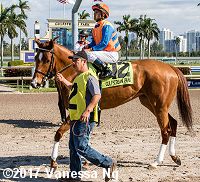 Left: Pretty Perfection in the winner's circle. Winning trainer Kelly Breen said, "It was great timing, Nik rode a great race. It looked like there was something going on the inside halfway through the turn. We avoided it, he tipped out. She was training almost identical to how she was for her last race so I was hoping she'd give us the same performance. It all worked out. I think having so much speed (in the race) helped. I'm just getting to know the filly, I've only had her for a couple of races, so knowing that she can sit and not go, go, go makes her a very versatile filly."

Right: Second place finisher Everything Lovely heads out for the post parade. 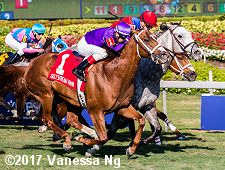 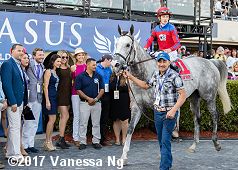 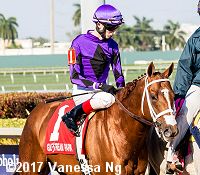 Left: Power Alert in the winner's circle. He also won this event last year. Winning trainer Brian Lynch said, "I'm very proud of this horse. He comes from the small country town where I came from in Australia. For him to show up on these big days like this means a lot to me. He's such an honest campaigner. When he's right, he's a very fast horse over 5/8 mile. Initially, I thought he won, but when I watched the replays I thought (Rainbow Heir) might have. It was a head bob and I had a gut feeling that our head was down and his was coming back." 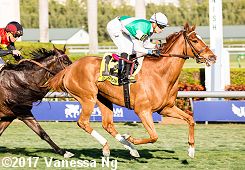 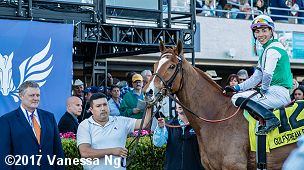 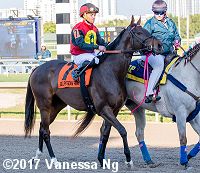 Left: Suffused in the winner's circle. Winning trainer Bill Mott said, "The post position was bad, but if you scratch, where are you going to run? She got into the two path around the second turn and looked like she had her (Aries) whenever she wanted to. He (Ortiz) said we came in a little when she switched leads. Horses always come in a half a path when they switch leads, that's just the nature of the beast."

Immediately before the Pegasus, a field of 12 older horses contested the $200,000 W.L. McKnight Handicap (G3) also at 1 1/2 miles on the turf. Knickerbocker (G3) fourth place finisher Mr Maybe was the 3-1 favorite over 7-2 Danish Dynaformer, second in the Red Smith Handicap (G3), and 5-1 Taghleeb, winner of the Allen Jerkens Stakes. 39-1 Diamond Bachelor was loose on the lead through fractions of 24.72, 49.31, 1:13.35, and 1:37.93 while stalked by 38-1 Patterson Cross. Entering the lane for the last time, Diamond Bachelor tired allowing Patterson Cross to inherit the lead. Taghleeb, 8th early, came through between horses to win by a head over late-running 8-1 Sadler's Joy in 2:25.90. It was a length back to Patterson Cross third, while favorite Mr Maybe checked in 10th. 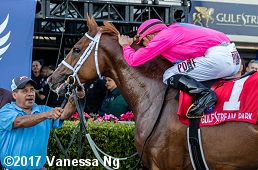 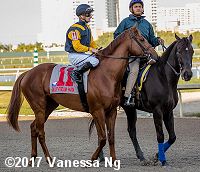 Left: Taghleeb in the winner's circle. Winning jockey Tyler Gaffalione said, "The race set up beautifully for us. The leaders did their work and we let them go and we relaxed back there. A couple of spots opened up and we were able to take advantage of it. When it came time to run, he just exploded. Mike really had him ready to go today. He is an exciting horse, but we are lucky the line came when it did."