The Canadian International was one of three graded stakes run on the Woodbine turf on Sunday. The distaff counterpart to the International is the $500,000 E.P. Taylor Stakes Presented by HPIBet (G1) for older fillies and mares going 1 1/4 miles over the good-to-firm (GoingStick reading 10.3) course under partly cloudy skies and temperatures in the high 60's (20 C). Give Thanks (G3) winner Best in the World was sent off as the lukewarm 3-1 choice in the field of 12, off her close second place finish in the Blandford (G2) at the Curragh. In to challenge her included 5-1 second choice Rainha de Bateria, winner of the Canadian Stakes (G2), the main local prep for the Taylor after finishing a close third in the Diana (G1) at Saratoga, and 11-2 third choice Swiss Range, winner of the Pretty Polly at Newmarket but 9th in the Prix de Diane (G1) at Chantilly and fourth in the Nassau (G1) at Goodwood.

Jockey Flavien Prat sent 18-1 Parvaneh to the lead exiting the dogleg and set fractions of 26.05, 49.83, 1:13.75, and 1:37.93 while pressed by 6-1 Al's Gal and stalked by 29-1 Tuttipaesi and Best in the World. Entering the stretch, Parvaneh, Tuttipaesi, and favorite Best in the World tired allowing Al's Gal to inherit the lead at the 3/16 pole. 7-1 Suffused, fifth early, put in a strong rally but Al's Gal, under confident handling by Florent Geroux, outfinished Suffused for the nose victory in 2:01.60, just 48/100 off the course record despite the damp conditions. It was another 1/2 length back to 21-1 Banzari third, while Best in the World faded to finish last. 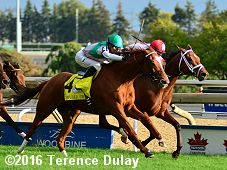 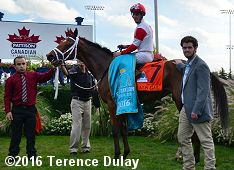 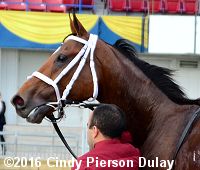 Left: Al's Gal in the winner's circle, with Nolan Ramsey (at right), grandson of owners Ken and Sarah Ramsey and assistant to trainer Mike Maker. Winning jockey Florent Geroux said, "There was no traffic for me today. When we broke from the gate I was right there, second position all the way and when I asked her turning from home she just gave me a nice turn of foot and was very brave. I don't have any game plan especially with horses like this who are very manageable and have tactical speed."

Right: Al's Gal heads back to the barns after the race. 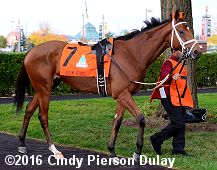 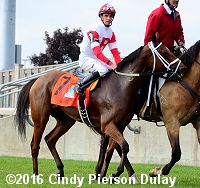 Left: Al's Gal in the paddock before the race. The Mike Maker trainee improved her record to 8 wins, 8 seconds, and 3 thirds in 26 starts, earning $749,775 for owners Ken and Sarah Ramsey. 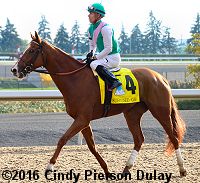 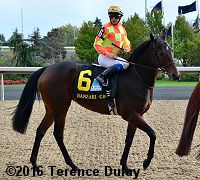 Left: Second place finisher Suffused returns after the race. Jockey Jose Ortiz said, "I wish I could have been in the clear before but I followed the winner the whole way. It was very close in the end. I thought I had it but I guess the head bob went to him."

Right: Third place finisher Banzari. The 21-1 shot settled in 5th early under Alexis Badel then rallied to get third beaten just 1/2 a length. The Henri-Francois Devin trainee improved her record to 5 wins, 1 second, and 2 thirds in 12 starts, earning $154,927 for owner Bobby Flay. 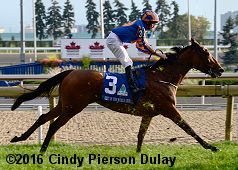 Beaten favorite Best in the World finishing last. The 3-1 choice tracked the pacesetter in 4th just 2 lengths off the lead under regular rider Ryan Moore but evened out in the stretch to finish last of 12 beaten 4 3/4 lengths. The Aidan O'Brien trainee has a record of 2 wins, 2 seconds, and 1 third in 9 starts, earning $141,246 for owners Michael Tabor, Susan Magnier, and Derrick Smith.


The $300,000 Nearctic Stakes (G2) features top older horses sprinting 6 furlongs on the turf. Allied Forces Stakes winner and Play the King (G2) runner-up Conquest Enforcer was the 9-5 favorite in the field of 8 over 2-1 Full Mast, 4th in the Woodbine Mile (G1), and 9-2 Stacked Deck, winner of the Ontario Jockey Club Stakes and the 2015 Sovereign Award winner for Champion Sprinter.

27-1 Expected Ruler was quickest away through an opening 1/4 of 22.39 before Stacked Deck took over on the turn through a half in 45.20. Stacked Deck led into the stretch through 5/8 in 56.43, but 16-1 Calgary Cat, last down the backstretch, came out 4 wide to circle the field and rallied to get up by a head in 1:08.32. It was another head back to late-running favorite Conquest Enforcer third. 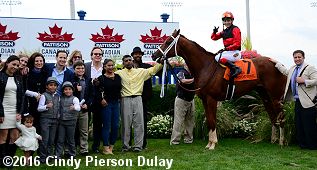 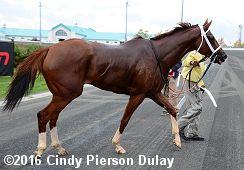 Left: Calgary Cat in the winner's circle. Winning trainer Kevin Attard said, "I've been kind of telling the owners that I haven't been quite as happy with his performances on the synthetic. He's been working really well, training super and his performance on the synthetic hasn't been what we've expected. His race at Saratoga was tremendous. It was his first time going 5 1/2 (turf). He came flying at the end. He's worked into this race really well. We were expecting a good performance out of him."

Right: Calgary Cat heads back to the barn after the race. He also won the 2014 Sovereign Award for Champion Sprinter. Jockey Luis Contreras said, "I got a prefect trip. My horse gave me anything from the 1/4 pole to the wire." 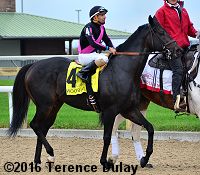 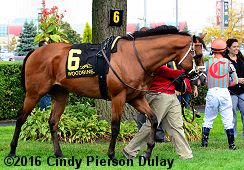 Left: Second place finisher Stacked Deck returns after the race. Jockey Rafael Hernandez said, "The trip was perfect. My horse just didn't see (Calgary Cat) coming on the outside. It was just a tough beat, he ran hard to the wire. He dug in from the 1/16 pole. He's a fighter."

Right: Third place finisher and beaten favorite Conquest Enforcer in the paddock before the race. The 9-5 choice settled in 4th about 2 lengths off the pace under Javier Castellano, came out for room but just missed, finishing third beaten a head. The Mark Casse trainee improved his record to 4 wins, 0 seconds, and 2 thirds in 7 starts, earning $360,640 for owner Conquest Stables LLC. 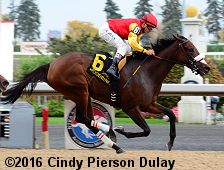 Kicking off the stakes quartet on Sunday was the $150,000 Ontario Fashion Stakes (G3) for older fillies and mares sprinting 6 furlongs on the Tapeta main track. Hendrie (G3) winneer and Seaway (G3) third place finisher Cactus Kris was the 2-1 favorite in the field of 6 over 5-2 Southern Ring, 4th in the Zadracarta last out, and 11-4 third choice River Maid, second in the Kenora Stakes. Jockey Emma-Jayne Wilson sent 19-1 longest shot Green Doctor to the lead exiting the chute through fractions of 22.14 and 44.47 while pressed by 14-1 Veaisha and stalked by Southern Ring. In the stretch, Veaisha gained a short lead through 5f in 56.37, but Southern Ring pulled ahead late to win by 3/4 length over late-running favorite Cactus Kris in 1:08.65, just 49/100 off the track record. It was another 1/2 length back to River Maid third. 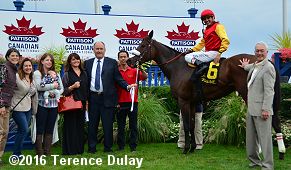 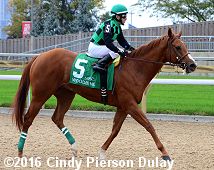 Left: Southern Ring in the winner's circle. Winning trainer Malcolm Pierce said, "She's been a special filly all along. We were really aiming at the Royal North (a turf stakes race) with her a month or so ago and she got a little injury in the stall. It was nothing, but we just couldn't run on that day. She trained into this race perfectly and she showed up today." Winning jockey Eurico Rosa da Silva added, "(The outside post) helped a lot. I had the chance to be where I wanted to be. If you are outside, you are worrying that another horse can come and cover you, but I didn't have that problem because I was way outside. I tried to stay a little bit more outside, and I was traveling with a lot of horse underneath me."