The $1.5 million Pattison Canadian International (G1) is the richest Thoroughbred horse race in Canada, and is a Breeders' Cup Challenge "Win and You're In" event in the Turf division. After Al Khali scratched due to the less than firm conditions, a field of 10 older horses went 1 1/2 miles on Sunday afternoon, one complete lap of Woodbine's E.P. Taylor Turf Course. Overnight rain downgraded the course to good, with a race time temperature of 70 degrees and 11 MPH headwind through the stretch under dark overcast conditions. Imperial Monarch was sent off as the 9-5 favorite, 3 for 4 lifetime including wins in the Classic Trial (G3) at Sandown and the Grand Prix de Paris (G1) at Longchamp. In to challenge him includd 4-1 second choice Joshua Tree, winner of this race in 2010 and runner-up last year, off a third in the Prix Foy (G2 at Longchamp, and 9-2 third choice Reliable Man, second in La Coupe de Maisons-Laffitte (G3) last out. 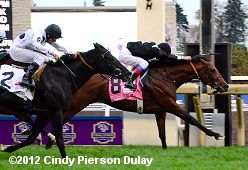 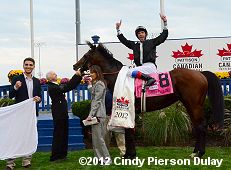 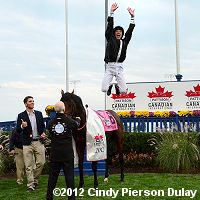 Left: Joshua Tree in the winner's circle, with Robert Bahou (left), son of co-owner Kamel Albahou holding the winner's blanket, and Lucie Botti (center), wife of trainer Marco Botti. Botti said, "It was always the plan (to bring him back one more time) and we are delighted for him that he won for us. He is a great horse to us, very consistent and just a superstar for us." Botti added that the horse will start next in the Japan Cup and skip the Breeders' Cup Turf.

Right: Jockey Frankie Dettori performs his flying dismount off Joshua Tree, as he does for all his Grade 1 wins. Dettori is only the second three-time winner of the Canadian International (after Mutafaweq in 2000 and Sulamani in 2004), but he is the only jockey to win three times since the race moved to turf in 1958. Joshua Tree is the third consecutive winner sired by Montjeu, after Sarah Lynx took last year's edition and Joshua Tree also won in 2010. 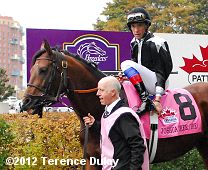 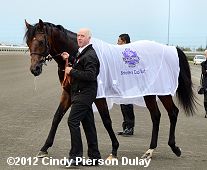 Left: Joshua Tree in the paddock before the race. He is one of only three 2-time winners of the International, after George Royal (1965-66) and Majesty's Prince (1982 and 1984). It is also the first International victory for current owners Khalid al Nabooda and Kamel Albahou, and trainer Marco Botti. He ran for different connections when he won in 2010.

Right: Joshua Tree heads back to the barn after the race. Jockey Frankie Dettori said, "That was always the plan, try to get to the front. It is (a calculated gamble), of course, because if you go to the front and somebody takes you on you’re going to set the (pace) for the closers. I'm very happy after half a mile. I was able to dictate my own tempo. When I kicked for home at the quarter pole, I knew I had plenty of horse left. I rode him last time. He was third in a good race in France and this was always the target. He's won it before and was second last year. He is a super horse and loves this track. Who knows? He might even be back next year." 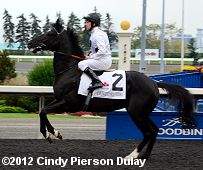 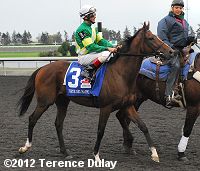 Left: Second place finsher Dandino takes off in the post parade. Jockey Jim Crowley said, "He ran a simply phenomenal race. Down the lane, he was always battling back, he wouldn't quit. I had a great trip. Another stride or two and I think we could have won it."

Right: Third place finisher Forte Dei Marmi in the post parade. Jockey John Velazquez said, "I had a perfect trip. I was saving ground, right behind the speed, we came running and they just caught me for second. He handled the turf perfect. Good horses beat him today, that's it." 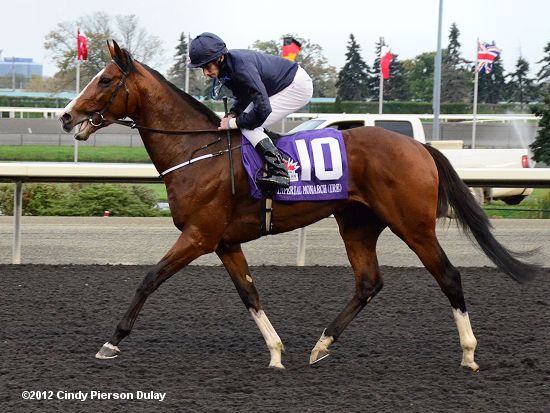 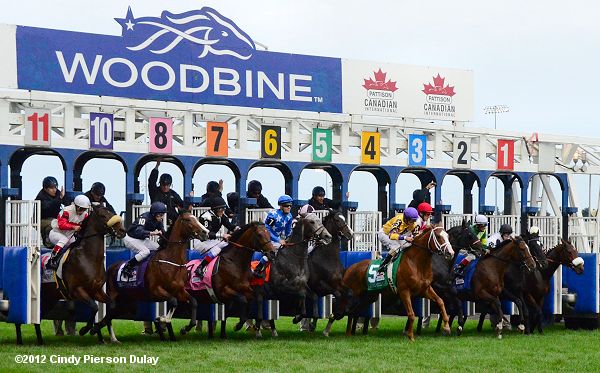 Left: Sixth place finisher and beaten favorite Imperial Monarch returns after the race. The 9-5 choice stalked the pace in fourth 1 1/2 lengths back under jockey Ryan Moore, but faded late to finish sixth beaten 3 3/4 lengths. The Aidan O'Brien trainee has a record of 3 wins, 0 seconds, and 0 thirds in 5 starts, earning $500,091 for owners Susan Magnier, Michael Tabor, and Derrick Smith.

Right: The field of 10 breaks from the gate for the 75th running of the Canadian International.