The $1.5 million Pattison Canadian International (G1) is the richest Thoroughbred horse race in Canada, and is a Breeders' Cup Challenge "Win and You're In" event in the Turf division. A record field of 16 older horses went 1 1/2 miles on Sunday afternoon, one complete lap of Woodbine's E.P. Taylor Turf Course. Several days of wet weather downgraded the course to yielding, with a race time temperature of 53 degrees and 11 MPH headwind through the stretch. Secretariat Stakes (G1) winner Treasure Beach was sent off as the 7-2 favorite, off his 14th place finish in the Prix de l'Arc de Triomphe (G1) at Longchamp last out. In to challenge him included 4-1 second choice Quest for Peace off his Cumberland Lodge Stakes (G3) win at Ascot, and 5-1 third choice Redwood, third in this race last year but winless this year, including a 4th place effort in the Glorious Stakes (G3) last out at Goodwood.

Jockey Joel Rosario set 25-1 Kara's Orientation to the lead immediately and he set easy fractions of 25.41, 52.06, 1:17.73, and 1:42.96, while pressed by 57-1 Bronze Cannon and 75-1 Miami Deco second and third respectively. Entering the stretch, Kara's Orientation continued to lead through 1 1/4 miles in 2:09.48, but he soon tired and faded from contention, while 22-1 Sarah Lynx, 10th early, was quickly gaining position. Jockey Christophe Soumillon sent Sarah Lynx through an opening at the 3/16 pole and she sprinted to the lead, opening up by 3 lengths at the 1/8 pole. 11-1 defending champion Joshua Tree, as far back as 12th early, put in a rally of his own which proved futile as Sarah Lynx cruised past the winning post 4 lengths in front in 2:34.90 over the yielding course. It was another 2 lengths back to late-running favorite Treasure Beach third. 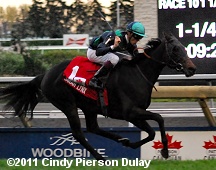 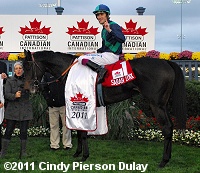 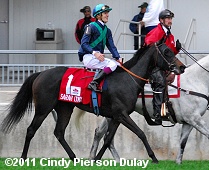 Left: Sarah Lynx in the winner's circle. Kate Bradley, assistant to trainer John Hammond said, "We've had a fantastic time since we've been here. We've been looked after exceptionally well. For a filly to win like that here you know it is phenomenal, really. Credit goes to Christophe (Soumillon) because he knows the filly very well. He's got great partnership with her and my boss also, John (Hammond). We are just over the moon. (Soumillon is) the best. He's the king." Bradley could not confirm if Sarah Lynx would start next in the Breeders' Cup, but said she is more likely to race in either the Japan Cup or the Hong Kong Vase.

Right: Sarah Lynx returns after the race. She is only the sixth female horse to win the Canadian International, and the first since Infamy in 1988. 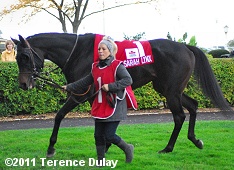 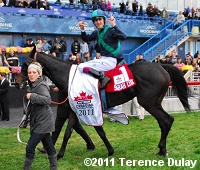 Left: Sarah Lynx in the paddock before the race.

Right: Sarah Lynx parades for the fans after the race. Her jockey Christophe Soumillon said, "She likes to be inside of horses. The great thing is that she has a good turn of foot. She is really relaxed in the race. This is the third time she's had blinkers on because before she was a bit lazy. So with those on, I saw she was not pulling at all in the race. She was really relaxed. I was quite confident. Last time (4th in the Prix Vermeille at Longchamp), she was a bit unlucky because she didn't jump out of the gate, but the form was really awesome. She got a chance today to do something great, but I didn't suppose her to win this race. She is a small filly, but she's very strong in the head, like a colt." 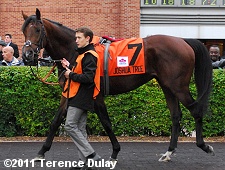 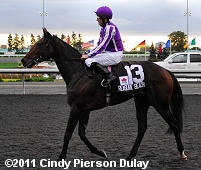 Left: Second place finsher Joshua Tree in the paddock. His jockey Adam Kirby said, "It was a little bit messy. Our horse missed the gate. I'd have liked to have gotten out a little sooner than I did but it was blocked up there and you have to wait for the space to happen. When it opened up, he quickened up good, but I think we just met one that was too good on the day."

Right: Third place finisher and beaten favorite Treasure Beach returns after the race. His jockey Colm O'Donoghue said, "He jumped great and he travelled really well. I had a great position turning in and he was travelling so easy. He tried very hard for me. The ground was probably too soft for him. It was very dead. After being on good ground, they're trying to quicken on it, and they can't."

The record field of 16 breaks from the gate for the 74th running of the Canadian International.