The Canadian International was one of three Breeders' Cup Challenge "Win and You're In" races that were run on Sunday afternoon at Woodbine. The distaff counterpart to the International is the $1 million E.P. Taylor Stakes (G1) Presented by Emirates Airline, with a field of 11 older fillies and mares going 1 1/4 miles on the turf course looking for an automatic entry into the Breeders' Cup Filly and Mare Turf. Dream Peace was sent off as the 2-1 favorite off her win in the Prix de la Nonette (G2) at Deauville. In to challenge her included 5-1 second choice Mahbooba, winner of the Godolphin Stakes at Newmarket last out, and 6-1 third choice Adventure Seeker, off a win in the Prix de Liancourt at Longchamp.

Jockey Martin Dwyer sent 17-2 Strawberrydaiquiri to the lead immediately, and she got the opening quarter in 25.34 while 1 1/2 lengths in front of 13-1 Laughing. Jamie Spencer aboard Mahbooba sent his charge to the front midway down the backstretch, and she led the field through fractions of 51.06, 1:16.07, and 1:41.00 while stalked by 9-1 I'm a Dreamer. Into the stretch, Mahbooba tired, allowing I'm a Dreamer to gain the lead at the 1/8 pole. But 12-1 Miss Keller, 10th for the first 3/4 mile, closed with a rush to catch I'm a Dreamer by a head in 2:06.98 over the yielding going. It was just a nose back to late-running favorite Dream Peace third. 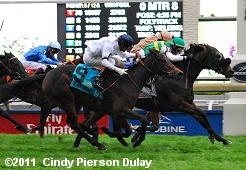 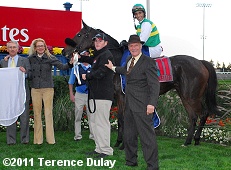 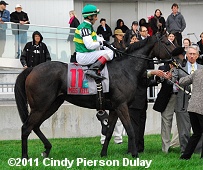 Left: Miss Keller in the winner's circle with trainer Roger Attfield by her side. Attfield said, "It's great. This is the last race I trained this filly to run in actually, because she is going to the sale in England. She's been a little bit of a project this year. I just haven't been able to win this damn thing. I'm so proud of her, it's a great thrill. I wasn't sure (about the photo finish). When I was running up the stairs everybody said 'You got it', I said 'You sure?' then when I watched the re-run I said 'Oh yeah I think I did' and came down."

Right: Miss Keller parades for the fans after the race. 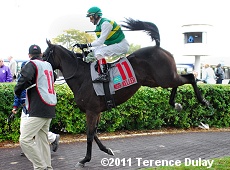 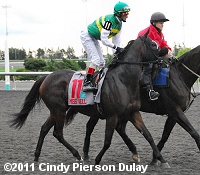 Left: Miss Keller acts up in the Walking ring before the race.

Right: Miss Keller in the post parade. Her jockey John Velazquez said, "I didn't know (whether I won it or not). Every time it seems like I won here by a photo I always get beat. So I didn't want to say that I got it until I was sure. I thought she ran a really good race last time out (5th in the Canadian Stakes) and she was probably a little far back and couldn't catch up. Today she was far back but I caught up before the 1/2 mile pole. I was within range, 5 or 6 lengths behind and I thought 'I hope I'm not moving too soon.'" 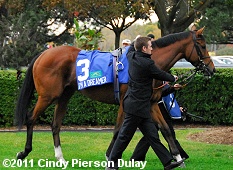 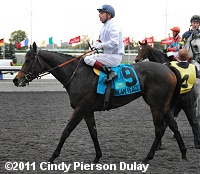 Left: Second place finisher I'm A Dreamer in the paddock before the race. The 9-1 shot stalked the pace in 4th early under regular rider William Buick, gained the lead at the 1/8 pole but just missed. The David Simcock trainee improved her record to 4 wins, 1 second and 1 third in 10 starts, earning $119,379 for owner St. Albans Bloodstock LLP.

Right: Third place finisher Dream Peace returns after the race. The 2-1 favorite raced in 8th early under jockey Gerald Mosse, then closed late to get third beaten just a head. The Robert Collet trainee improved her record to 4 wins, 1 second, and 4 thirds in 11 starts, earning $347,376 for owners Haras d'Etreham and Micheline Vidal.


Kicking off the stakes action on Sunday was the $500,000 Nearctic Stakes (G1), a "Win and You're In" race for the Breeders' Cup Turf Sprint. A field of 12 older horses contested this 6 furlong sprint, with Bated Breath sent off as the 2-1 favorite off his close 2nd place finish in the Betfred Sprint Cup (G1) at Haydock Park. In to challenge him included 4-1 second choice Right One, a close third in the Woodbine Mile (G1) last out, and 5-1 third choice Bewitched, off a 4th place finish in the Prix de la Foret (G1) at Longchamp.

Jockey Corey Nakatani sent 10-1 Regally Ready to the lead immediately and he set fractions of 23.47 and 46.66, while 1 1/2 lengths in front of 12-1 Fiddlers Patriot and 19-1 Gypsy Ring. Entering the stretch, Regally Ready continued to lead through 5/8 in 58.46. Bated Breath, who was 7th down the backstretch, came through between horses late but Regally Ready held him off by a neck in 1:11.35. It was just a head back to Gypsy Ring third. 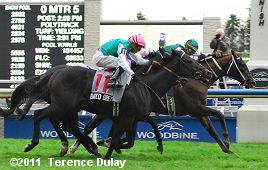 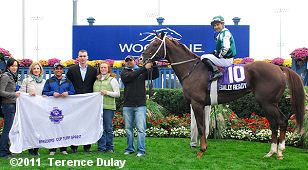 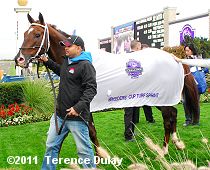 Left: Regally Ready in the winner's circle. Devron Leingang, assistant to winning trainer Steve Asmussen said, "(Steve) just said his first 2 races back were easy races for him. They wanted o set him up for the Breeders' Cup and they wanted to win this race. Looks like he is on his way. (Last year) he went to California and he really flourished on the grass out there and he went to Churchill and won there. He won here and he's back to Churchill where he is 2-for-2 so far."

Right: Regally Ready heads back to the barn after the race. 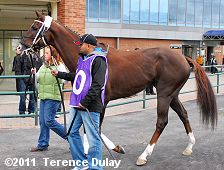 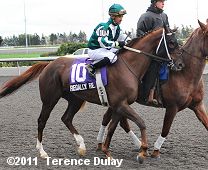 Left: Regally Ready in the paddock before the race.

Right: Regally Ready in the post parade. His jockey Corey Nakatani said, "The main thing with him is to get him relaxed. He got away great. His last two comeback races, the first one he got a little bit late, but Steve said 'Don't worry, we're right on track for the Breeders' Cup.' So I think this was a great spot and he did what he is supposed to do." 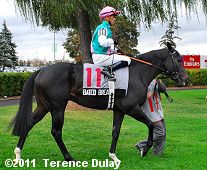 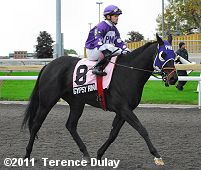 Right: Third place finisher Gypsy Ring returns after the race. The 19-1 shot stalked the pace under regular rider Justin Stein, set down for the drive and held third beaten a neck. He improved his record to 6 wins, 7 seconds, and 4 thirds in 21 starts, earning $503,834 for owner, breeder, and trainer Paul Buttigieg.