The $2 million Pattison Canadian International (G1) is the richest horse race in Canada, and is a Breeders' Cup Challenge "Win and You're In" event in the Turf division. A field of 9 older horses went 1 1/2 miles on Saturday afternoon, one complete lap of Woodbine's E.P. Taylor Turf Course, on a sunny fall afternoon with a race time temperature of 59 degrees and a 15 mph headwind through the stretch. Rains earlier in the week soaked the course but it had dried to "good" in time for the stakes races. Redwood, winner of the Northern Dancer Turf last out, the major local prep for the International, was sent off as the 2-1 favorite. In to challenge him included 3-1 second choice and United Nations Stakes (G1) winner Chinchon off a disappointing 6th in the Prix Foy (G1), and 9-2 third choice and Royal Lodge Stakes (G2) winner Joshua Tree, the only 3-year-old in the field, off a 5th place finish in the St. Leger Stakes (G1).

7-1 fifth choice Fifty Proof was sent to the lead immediately by regular rider Justin Stein, and he set slow fractions of 26.17, 52.17, 1:18.48, and 1:42.92 while as many as 2 lengths in front of 12-1 Marsh Side and 17-1 Simmard who stalked him second and third down the backstretch. Fifty Proof continued to lead into the stretch, getting 1 1/4 miles in 2:08.34 over the good turf, but the slow pace caused the field to bunch up at the 3/16 pole. In mid-stretch Fifty Proof stubbornly held a short lead which was quickly disappearing. Joshua Tree, who was 5th early, 20-1 Mores Wells 6th early, and favorite Redwood 7th early, closed with a rush and hit the line together in a 3-horse blanket finish. The photo determined that Joshua Tree prevailed by a head over Mores Wells, in 2:32.72. It was just a nose back to Redwood third, and 1/2 a length more to 5-1 fourth choice Al Khali. Last place finisher and 50-1 longest shot Memorial Maniac was just 4 lengths behind the winner. 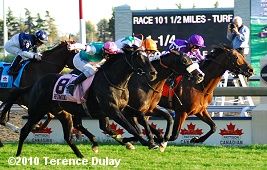 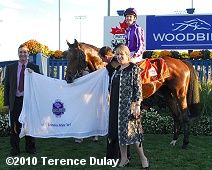 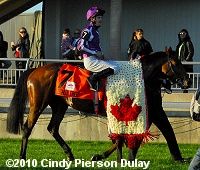 Left: Joshua Tree in the winner's circle with Bernadette and Tom Ryan, agents for co-owner Khalifa Bin Hamad Al Attyah, holding his "Win and You're In" blanket which Joshua Tree is chewing on. Bernadette said, "We were scared for a few moments before the race in the paddock (when Joshua Tree lost a shoe). On a day like today you want everything to go perfect and smoothly and he didn't get into the (post) parade. But it was all OK." Her husband Tom added, "We wanted to give him a clean run. He's only 3 but we thought this was a good race for him." 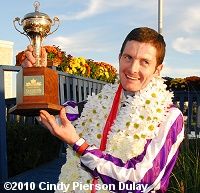 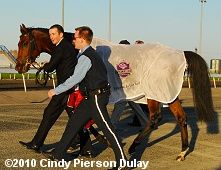 Left: Jockey Colm O'Donoghue poses with the trophy and flowers. O'Donoghue said, "He broke really well, got a good position early, and settled down well into the race on the backstretch. The pace started to pick up from about a half-mile out, and he got into the best position in the race. The horse on my outside fell away, and he quickened up really well, and ran strong to the line. I knew the last half-furlong he was probably getting a little bit lonely in front."

Right: Joshua Tree heads back to the barn after the race. 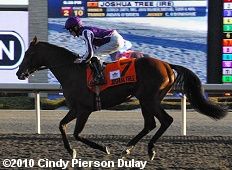 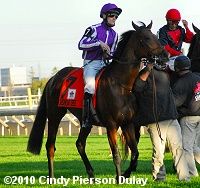 Left: Joshua Tree prepares to load in the starting gate. O'Donoghue said, "It's amazing. This is very important to me and means an awful lot. I really owe the owners a lot - they put their trust in me to come over here and ride this horse and he has been trained specifically for this race by Aidan (O'Brien, trainer). He knew he was the right type of horse and he missed the Prix de l'Arc de Triomphe to come here."

Right: After losing a shoe in the saddling area, Joshua Tree did not go in the walking ring or participate in the post parade. He came out last and ran off right away. 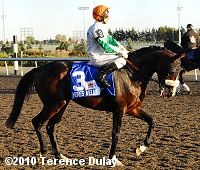 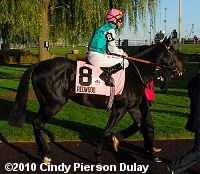 Right: Third place finisher and beaten favorite Redwood in the paddock before the race. His jockey Michael Hills said, "It went pretty good. I wish I had gotten more pace. He just got caught for a bit of speed when it really mattered." The Barry Hills trainee sat 7th four-wide early, came through between horses and just missed. He improved his record to 4 wins, 4 seconds, and 0 thirds in 11 starts, earning $895,189 for owner-breeder Juddmonte Farms. 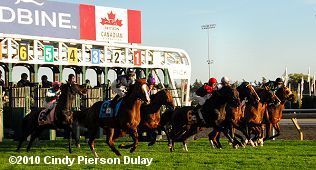 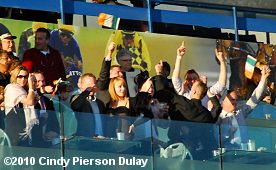 Left: The horses break from the gate for the 72nd running of the Canadian International. Favorite Redwood broke badly and spotted the field a couple of lengths at the start.

Right: Joshua Tree had a large Irish cheering section in the stands after his win.