The Canadian International was one of three Breeders' Cup Challenge "Win and You're In" races that were run on Sunday afternoon at Woodbine. The distaff counterpart to the International is the $1 million E.P. Taylor Stakes (G1), with a field of 13 older fillies and mares going 1 1/4 miles on the turf course looking for an automatic entry into the Breeders' Cup Filly and Mare Turf. Siyouma was sent off as the 5-2 favorite off her win in the Sun Chariot Stakes (G1) at Newmarket. In to challenge her included 3-1 second choice Dream Peace, third in the Flower Bowl (G1) after finishing second in the Diana (G1), and 9-2 third choice Princess Highway, winner of the Ribblesdale (G2) 3 starts back at Royal Ascot but seventh in the Prix Vermeille (G1) last out. 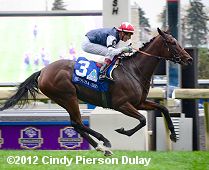 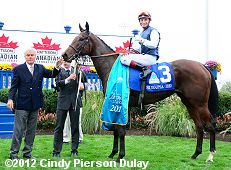 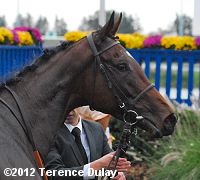 Left: Siyouma in the winner's circle with trainer Francois Doumen at her head. Doumen said, "She's so good and she's so calm. She has got such a wonderful temperament that it allows her to travel beautifully well and takes all the effort away."

Right: Siyouma gets ready to leave the winner's circle. She improved her record to 4 wins, 0 seconds, and 3 thirds in 10 starts, earning $861,385 for owner Robbert Jeffcock. 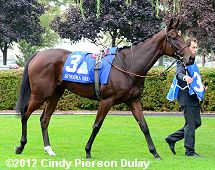 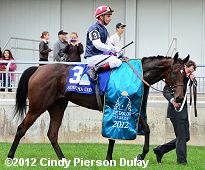 Left: Siyouma in the paddock before the race. Jockey Gerald Mosse said, "To be honest, I was not worried about the track, the ground and the filly. I was just a bit worried two weeks ago, she was in the UK and we won a Group 1 already. It was a bit short in timing, but I told the trainer that if he chose to come, it means we are coming for something solid."

Right: Siyouma with her winner's sash. Trainer Francois Doumen said that 3-year-old filly will skip the Breeders' Cup and instead run in the Queen Elizabeth II Commemorative Cup at Kyoto or the Hong Kong Cup at Sha Tin. 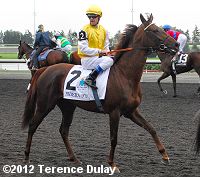 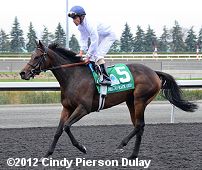 Left: Second place finisher Pagera in the post parade. Jockey Olivier Peslier said, "We travelled very well and had plenty of chance to gain the lead and did very well to be second. I think it's (the turf) more heavy, which is not for her, but she ran very well."


Kicking off the Breeders' Cup Challenge stakes action on Sunday was the $500,000 Nearctic Stakes (G1), a "Win and You're In" race for the Breeders' Cup Turf Sprint. A field of 11 older horses contested this 6 furlong sprint, with Play the King (G2) winner Big Band Sound sent off as the 5-2 favorite off his 6th place effort in the Woodbine Mile (G1). In to challenge him included 3-1 second choice Fire Lily, third in the Renaissance Stakes (G3) at the Curragh, and 9-2 third choice Night Carnation, second in the Queensferry Stakes at Chester before winning an allowance at Bath.

Jockey Ramon Dominguez sent 16-1 Next Question to the lead immediately and he set quick fractions of 23.03 and 45.71 over the good turf, while pressed by 10-1 Bear Tough Tiger. Night Carnation, 5th early, challenged for the lead midstretch through 5/8 in 57.01 but Next Question outfinished her, winning by 1/2 a length in 1:09.32. It was another 1/2 length back to Bear Tough Tiger third, and another 1/2 length to favorite Big Band Sound fourth. 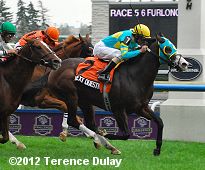 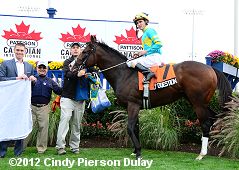 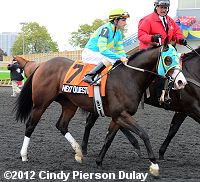 Left: Next Question in the winner's circle. Jockey Ramon Dominguez said, "He is a horse with a lot of natural speed and when we left the gate and I saw the (Bear Tough Tiger) trying to make the lead, I was excited about that. I kind of wanted to rate and stalk, but my horse was really pulling me and taking me forward so I decided to just keep him together. I was very happy with how he relaxed and turning for home he gave me a pretty good kick."

Right: Next Question in the post parade. The Mike Trombetta trainee improved his record to 3 wins, 1 second, and 1 third in 7 starts, earning $403,013 for owner Three Diamonds Farm. 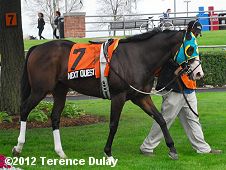 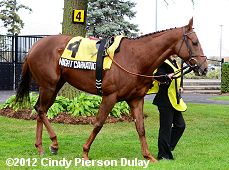 Left: Next Question in the paddock before the race.

Right: Second place finisher Night Carnation in the paddock before the race. The 9-2 third choice raced 5th early under John Velazquez, then challenged for the lead but was outfinished. The Andrew Balding trainee improved her record to 5 wins, 3 seconds, and 1 third in 17 starts, earning $247,768 for owner-breeder Augustin Stable (George Strawbridge). 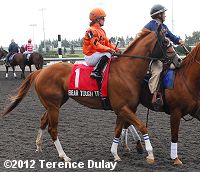 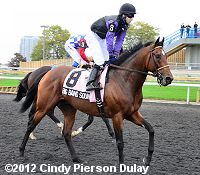 Right: Fourth place finisher and beaten favorite Big Band Sound returns after the race. The 5-2 favorite raced in 10th early just 5 lengths back under jockey Tyler Pizarro, then rallied to get fourth beaten 1 1/2 lengths. The Dan Vella trainee improved his record to 5 wins, 4 seconds, and 3 thirds in 19 starts, earning $396,079 for co-owner and breeder Richard Shultz and co-owner Ken Standlee. 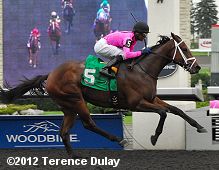 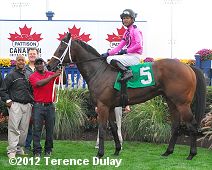 Kathryn Sullivan, assistant to trainer Mark Casse said, "I always get a bit nervous, but I should know better. Patrick had the measure of the horse all that way down the stretch and he had it well in hand. He has just been doing everything right. He's never been worse than third in his career. He is such a consistent horse and I think he has really been improving." Jockey Patrick Husbands added, "He is legit fast leaving the gate and he's not a run off type horse. He's a Speightstown, which is speed, speed, but when he's on the lead, he's not going to run off on you."