The Canadian International was one of three graded stakes run on the Woodbine turf on Sunday. The distaff counterpart to the International is the $500,000 E.P. Taylor Stakes (G1) for older fillies and mares going 1 1/4 miles over the good-to-firm (GoingStick reading 10.5) course under cloudy skies and temperatures in the low 40's. Curvy was sent off as the 5-2 favorite in the field of 12, exiting a 5th place finish in the Flower Bowl (G1) after finishing 4th in the Yorkshire Oaks (G1). In to challenge her included 7-2 second choice Strut the Course, winner of the Canadian (G2), and 7-1 third choice Yaazy, off her win in the Prix Joubert. 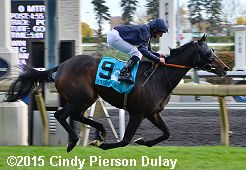 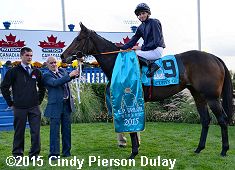 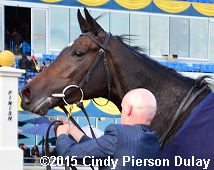 Left: Curvy in the winner's circle. Winning jockey Ryan Moore said, "I was following a wall of horses. She has been a very impressive filly. She started the season off in handicaps and she has just progressed. She has kept on improving. She'd won a Group 2 at Royal Ascot but the ground at Belmont was too soft for her."

Right: Curvy heads back to the barns after the race. 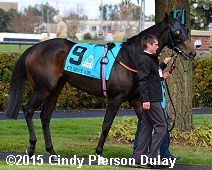 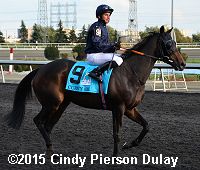 Left: Curvy in the paddock before the race. 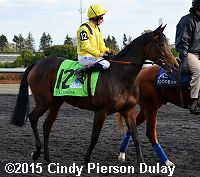 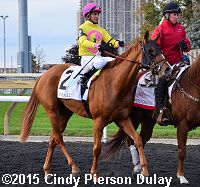 
The $300,000 Nearctic Stakes (G2) features top older horses sprinting 6 furlongs on the turf. Quick Call Stakes 4th place finisher Cyclogenesis was sent off as the 5-2 favorite in the field of 10 over 4-1 The Great War, second in the Quick Call, and 5-1 Terror, 2nd in the Boadicea Stakes at Newmarket. 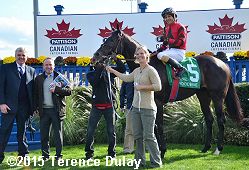 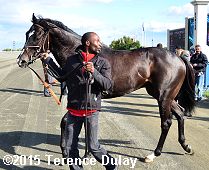 Left: Bye Bye Bernie in the winner's circle. Winning jockey Rafael Hernandez said, "I just wanted to get a nice trip. The horse, when I ride him, he breaks right on top but takes himself back in the first couple of jumps. It's easy to ride this horse. The long stretch helped a lot. The horse ran his race."

Right: Bye Bye Bernie heads back to the barn after the race. Winning trainer Brendan Walsh said, "He has delivered. The key to him is the trip. Your typical American races (turf sprints) at 5 or 5 1/2 is a little short for him. We ran 6 1/2 at Kentucky Downs and he ran great. The six here we thought is the minimum to get his optimum performance. He got it today, he's a good horse. He's worked out good. It paid dividends today." 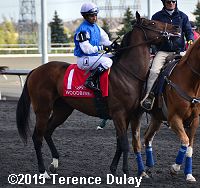 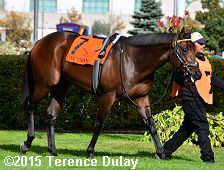 Right: Third place finisher The Great War in the paddock before the race. The Wesley Ward trainee improved his record to 4 wins, 2 seconds, and 1 third in 12 starts, earning $293,352 for owners Michael Tabor, Derrick Smith, Mrs. John Magnier, and Joseph Allen. 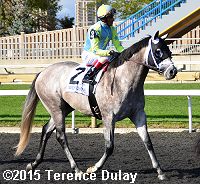 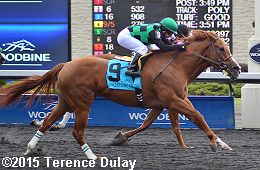 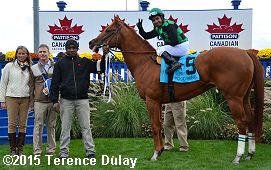 The undercard feature on Sunday was the $150,000 Ontario Fashion Stakes (G3) for older fillies and mares sprinting 6 furlongs on the Polytrack. Jockey Justin Stein sent 6-1 Tahnee to the lead exiting the chute and she set fractions of 22.40 and 45.53 while pressed by 9-5 favorite Endless Light and stalked by 16-1 Skylander Girl. Entering the stretch Tahnee tired as Endless Light inherited the lead through 5/8 in 57.62, but 5-1 Cactus Kris, last through the first 11/16 mile, came out for room and rallied to get up by a neck in 1:10.06. It was another 1 1/4 length back to 9-1 Scotty's Model third.

Winning trainer Ryan Walsh said, "She loves it here. Huber (jockey Villa-Gomez) has told me many times that this is her favorite track. We keep her on the synthetic and grass. She seems to really like it. I was hoping that was the way she'd run. She was coming off a distance race, and I knew stamina would be on her side. If she could get close, she could get it done. She's a neat horse."