The last Grade 1 races of the Canadian racing season were run at Woodbine on Sunday, highlighted by the 78th renewal of the $1 million Pattison Canadian International (G1), featuring top older horses going 1 1/2 miles, 1 complete lap of the E.P. Taylor Turf Course. It was unusually chilly for mid-October at the Toronto oval, with mostly cloudy skies and temperatures in the low 40's, with the GoingStick reading of 10.5 indicating a good-to-firm course.

Cannock Chase was sent off as the 11-4 favorite in the field of 11 off his Godolphin Stakes win after a close second in the Winter Hill Stakes (G3). In to challenge him included 3-1 second choice Second Step, 4th in the Irish St. Leger (G1) after winning the Grosser Preis von Berlin (G1), and 7-1 third choice Interpol, winner of the Sky Classic (G2) and Northern Dancer (G1), the major local prep series for this event. 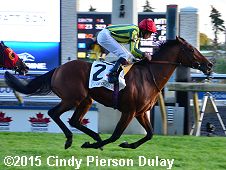 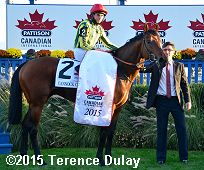 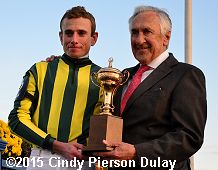 Left: Cannock Chase in the winner's circle. Winning jockey Ryan Moore said, "I'm very lucky. I get to ride very good horses. It worked out well today. I thought this horse was impressive. As soon as he got a bit of room, he quickened. He won easy."

Right: Jockey Ryan Moore and Bruce Raymond the racing manager for owner Rabbah Bloodstock pose with the trophy. This is Ryan Moore's third consecutive win in the International after Joshua Tree in 2013 and Hillstar in 2014, and trainer Sir Michael Stoute's third overall after Singspiel in 1996 and Hillstar. 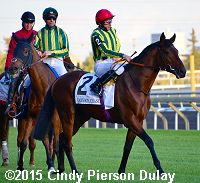 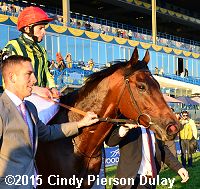 Left: Cannock Chase behind the starting gate before the race along with stablemate Sheikhzayedroad. Ryan Moore is the first jockey to win both the International and Taylor on the same card since Gary Stevens in 1998.

Right: Cannock Chase parades for the fans after the race. Bruce Raymond, racing manager for owner Rabbah Bloodstock said, "(Sir) Michael (Stoute) has done a very good job with him. The horse had a few problems, but since he has been stepped up to 1 1/2 miles, he has been doing well. He's a very good horse at this distance.He had a good turn of foot today. He's a good horse at this distance. The owner picked him out at Newmarket (yearling sale) for 400,000 pounds and it was a good buy. Ryan Moore, he's the best. We're lucky to have him." 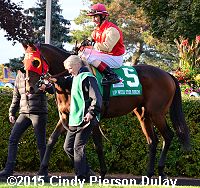 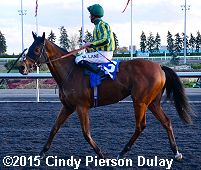 Left: Second place finsher Up With The Birds in the paddock before the race. Jockey John Velazquez said, "I had a perfect trip. He tipped out and he was running so well that I thought they're really going to have to run hard to beat him. He was absolutely rolling down the lane. He ran so well today."

Right: Third place finisher Sheikhzayedroad returns after the race. Jockey Martin Lane said, "I had a wall of horses in front of me going around the bend so I had to switch wide, which is never ideal, but he galloped all the way to the line. He was game, as he always is. He ran a very good race. With a bit further, we might have got second but looking at the winner, that's the best we could have done on the day."

The field breaks from the starting gate for the 78th running of the Canadian International.