On Wednesday, the eve of the 2016 Canadian Premier Yearling Sale, Woodbine Racetrack hosted "Canadian Millions Night", a series of 6 stakes races restricted to Canadian-breds who went through the Woodbine sales ring as a yearling. The race night is sponsored by Ontario Lottery and Gaming (OLG) with purses worth a combined $900,000. After a prolonged heat wave this summer in Toronto, conditions were excellent as the temperature dropped to 70 degrees at sunset with a 20 MPH headwind in the stretch.

The $200,000 OLG Simcoe Stakes Presented by Samuel, Son and Co. Limited featured a field of seven 2-year-old males sprinting 6 1/2 furlongs on the Tapeta main track. Lokinforpursemonee was the 2-5 choice over 9-2 Pachi Cruze and 7-1 Blu Without You. 35-1 first time starter Leonard's Bay dueled for the lead with 11-1 Napayshni through fractions of 22.94 and 46.48 while stalked by Pachi Cruze. Entering the lane Leonard's Bay tired as Pachi Cruze took over, opening up a 1 1/2 length lead through 3/4 in 1:12.13. However, Lokinforpursemonee, 6th early, found room between horses to get up by a a neck in 1:18.79. It was another neck back to late-running Blu Without You third. 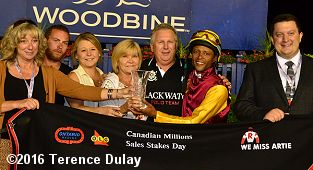 Left: Lokinforpursemonee in the winner's circle. Winning owner-trainer John Ross said, "He's been a dynamite little horse. Trains well in the morning and does all the things that good horses do. You can race him from behind and he goes through tight situations in the race and that's what a classy horse does. We're thrilled to have him in the barn."

Right: The trophy presentation for the Simcoe Stakes. 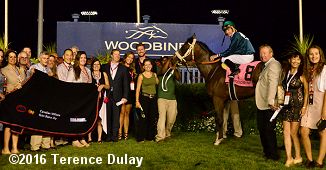 Kicking off the stakes action on Wednesday, a field of 7 older horses contested the $125,000 OLG Halton Stakes Presented by Tipperary Equestrian at 1 mile on the turf. Dynamic Sky was the 8-5 favorite over 7-4 Aldous Snow and 4-1 Hampstead Heath. Jockey Gerry Olguin sent 22-1 Eminent Force to the early lead through fractions of 24.18, 47.42, and 1:11.80 while pressed by 25-1 Get'erdonebud and stalked by Hampstead Heath. Eminent Force continued to lead to midstretch through 7/8 in 1:23.86, but 9-1 Strut N Stomp, 5th early, rallied 3 wide to get up by a head in 1:36.29 over the firm going. It was another 2 lengths back to Hampstead Heath third, while Dynamic Sky failed to rally from last and checked in 6th.

Winning trainer Don MacRae said, "We were screaming real loud and cheering down the lane. It was a great experience and I'm very happy for my owners (Michael Lay, Mike Loughry, and D-Mac Racing Stable). We're trying to reinvest. That's what we need to do in this game right now is get more horses into it."

The $125,000 OLG Elgin Stakes Presented by Bear Stables originally drew a field of 5 older males to go 1 1/16 miles on Tapeta, however after 2 scratches just 3 faced the starter on Wednesday night, with defending champion Melmich the 1-2 choice over 3-2 Kingsport and 11-2 Freitag. Kingsport dueled with Melmich through fractions of 25.92, 50.39, and 1:13.76 with Freitag about 2 lengths behind. Entering the stretch, Melmich took over for good, clocking 1 mile in 1:37.94 and holding off late-running Freitag to win by 1/2 a length in 1:44.43. It was 3/4 length back to Kingsport third.

Winning trainer Nick Gonzalez said, "We were lucky with the draw. We had a good post position today with speed inside of us. Rafael (Hernandez) told me an important thing after the last time he rode him. Even though he had a pressured pace and a horse inside him, he said, 'Nick, if we get the right trip we could sit and stalk and pounce.'" This was the first stakes win for owner John Caulfield.