The inaugural running of the $12 million Pegasus World Cup (G1) was contested on Saturday afternoon at Gulfstream Park in south Florida. Conditions were excellent with sunny skies and temperatures in the low 70's. The maximum field of 12 older horses went to post, with each owner having either purchased a $1 million share in the race, or leased their share from an original investor. 2016 Eclipse Award champion 3-year-old male Arrogate was sent off as the 9-10 favorite off his wins in the Travers Stakes (G1) and Breeders' Cup Classic (G1). In to challenge him included 2016 Horse of the Year California Chrome at 6-5 second choice, winner of last year's Dubai World Cup (G1) and Pacific Classic (G1) but second to Arrogate in the Classic, and 16-1 third choice Keen Ice, third in the Classic before finishing second in the Harlan's Holiday (G3), the main local prep for this race.

Jockey Julien Leparoux sent 30-1 Noble Bird to the lead first time past the stands and he set fractions of 23.46 and 46.14 while pressed by 23-1 Neolithic and stalked by Arrogate on the rail and California Chrome on the outside. Down the backstretch, Arrogate gained a short lead on Neolithic through 3/4 in 1:09.80. On the far turn, California Chrome failed to respond when asked by jockey Victor Espinoza, who allowed him to finish the distance without further urging. Arrogate, under confident handling by regular rider Mike Smith, surged to a 4 length lead midstretch through 1 mile in 1:33.90. Despite being geared down in the final furlong, Arrogate still drew off to a 4 3/4 length win over late-runnin 20-1 Shaman Ghost in 1:47.61 over the fast main track. It wass another 2 1/2 lengths back to Neolithic third. California Chrome faded to finish 9th beaten 29 1/2 lengths. 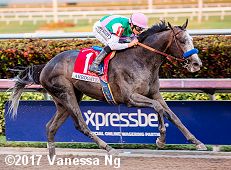 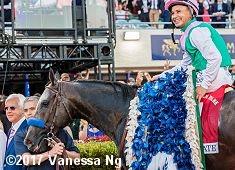 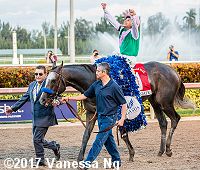 Left: Arrogate in the winner's circle. Winning trainer Bob Baffert said, "You know, what? He's a superior horse. He's just a great horse. I kept waiting for the matchup with Chrome, but he just didn't bring his race today. It's too bad. We expected to win, but he got a little tired at the end. He probably needed it badly."

Right: Arrogate parades after the race. 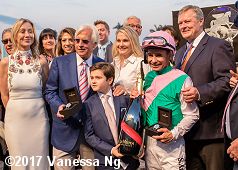 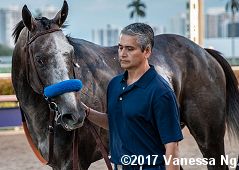 Right: Arrogate heads back to the barn with groom Eduardo Luna. 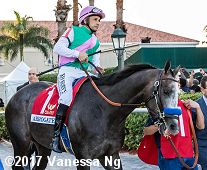 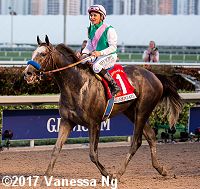 Left: Arrogate heads out to the track before the race. Winning jockey Mike Smith said, "Chrome just didn't fire his race today at all. I was able to tip out and he was gone after that. Getting out was the anxious part. Once I was able to get him out and let him stretch his legs, if you can let him use it to his advantage, why not? Once I got out going into the far turn, I knew we were going to be tough to beat. He had a lot of run today, and I was very happy. As far as winning the world's richest race, I'm absolutely numb."

Right: Arrogate returns after the race. 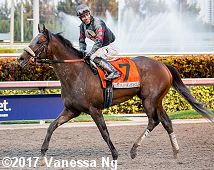 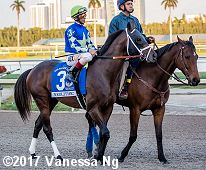 Left: Second place finisher Shaman Ghost returns after the race. Jockey Jose Ortiz said, "I knew I had a good chance to run second or maybe win, but Arrogate drew off, so I knew I got second. My horse was running really, really hard underneath me and I couldn't even get close (to Arrogate)."

Right: Third place finisher Neolithic in the post parade. Jockey John Velazquez said, "He was pretty good on the first turn and once we got to the backstretch he got into the bridle and that was it. He ran as good as he could today." 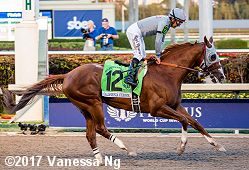 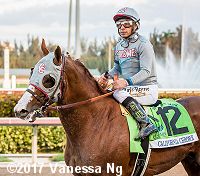 Left: Ninth place finisher and second choice California Chrome eases across the finish. Trainer Art Sherman said, "Down the backside he was sitting in a perfect spot right next to Arrogate and he just didn’t go on. I could understand him being outrun, but he never even tried. He never fired. That’s just not like him. I’ve never seen him hang like that before." After returning to the barn, fluid accumulation was found in California Chrome's right knee. Sherman added, "It might be a chip, which we could take out arthroscopically." Frank Taylor of co-owner Taylor Made Farm said on Sunday morning, "He's not that bad. If he's sound to walk, he's sound to breed mares." He will be X-rayed at Taylor Made Farm and is scheduled to breed test mares on Wednesday.

Right: California Chrome returns after his final career start. Jockey Victor Espinoza said, "He was just empty today. At the first turn I thought I was good, but when we hit the 5/8 he just completely shut down. I just couldn't keep up with the ones in front of me. He just started backing up and just wasn't the same. He's done a lot. Sometimes he's going to throw in one of those bad races and one of those bad times was today."