Breeders' Cup Challenge "Win and You're In" weekend at Woodbine concluded on Sunday with races for 2-year-olds on the turf, each contested at 1 mile around 1 turn of the E.P. Taylor Turf Course. After a rainy Woodbine Mile day on Saturday, conditions were excellent with partly cloudy skies and temperatures in the high 70's. Despite the rain, the turf was rated good-to-firm, with a GoingStick reading of 10.3.

A field of 7 two-year-old males contested the $200,000 Summer Stakes (G2) looking for automatic entry into the Breeders' Cup Juvenile Turf. Conquest Farenheit was sent off as the even-money favorite off his 5 length debut romp over a yielding Woodbine course. In to challenge him included 3-1 second choice Good Samaritan, a debut winner over Saratoga's Mellon course last out, and 5-1 third choice Harlan's Harmony, undefeated in his 2 starts, both on turf, including the Skindmore Stakes at Saratoga.

After bumping Harlan's Harmony out of the gate, 14-1 Channel Maker was quickest away through an opening quarter mile of 23.21 before Harlan's Harmony took over near the end of the backstretch through a half in 46.01 while opressed by 69-1 The Craic and stalked by Conquest Farenheit. At the top of the lane Conquest Farenheit gained a short lead through 3/4 in 1:10.69, but Good Samaritan, last for the first 5/8 mile, came out 5 wide for room to take over at the 1/8 pole, and drew away to win by 1 1/2 lengths over Conquest Farenheit in 1:34.38. It was another 1 1/2 lengths back to Channel Maker third.

Also on the card was the Natalma Stakes (G2) won by Victory to Victory. 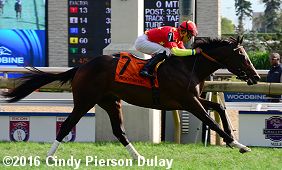 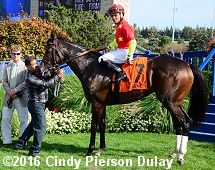 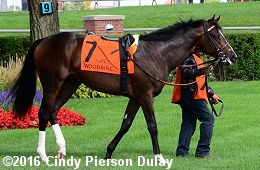 Left: Good Samaritan in the winner's circle. Riley Mott, assistant and son of trainer Bill said, "He's always trained pretty forwardly. Going into his first race, he had some nice breezes. He worked exceptionally good on the turf. We had confidence that he would run good in his first start, and he was very professional. He ran a similar race [today], and improved a little bit. We're very pleased. Hopefully, we can look forward to the Breeders' Cup."

Right: Good Samaritan in the paddock before the race. Winning jockey Joel Rosario said, "He's very professional. When he starts running he's very focused—when I rode him last time he was the same way. He's shown that he had a lot of talent. He may have a good future." 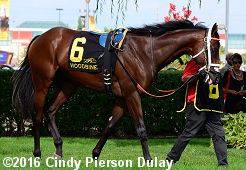 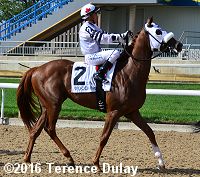 Left: Second place finisher and beaten favorite Conquest Farenheit in the paddock before the race. The even-money choice stalked the pace in 3rd a length back under Patrick Husbands, led at the top of the stretch but was outfinished. The Mark Casse trainee improved his record to 1 win and 1 second in 2 starts, earning $56,225 for owner Conquest Stables LLC.

Right: Third place finisher returns after the race. The 14-1 shot raced 4th about 1 3/4 lengths back under Luis Contreras, then passed tired horses to get third beaten 3 lengths. The Dan Vella trainee improved his record to 1 win and 2 thirds in 3 starts, earning $95,073 for owner Joey Gee Thoroughbreds.


Earlier in the card, a full field of 14 two-year-old fillies contested the $250,000 Natalma Stakes (G1), with the winner earning a berth in the Breeders' Cup Juvenile Fillies Turf. Red Lodge was sent off as the 7-2 favorite off her win in the Colleen Stakes at Monmouth Park. In to challenge her included 4-1 second choice Enstone, still a maiden but a close second in her last 2 starts, and 17-4 third choice Beat the Benchmark, a debut winner over the Mellon turf at Saratoga last out.

Jockey Jesse Campbell sent 15-1 Will She to the lead down the backstretch and around the turn through fractions of 22.69, 45.37, and 1:10.42 while pressed by Red Lodge and stalked by Enstone. Entering the stretch, Will She tired as 8-1 Victory to Victory, 5th and 3 lengths off the pace early under Florent Geroux, came out 6 wide for room and swept to the front through 7/8 in 1:22.83. Kept to task by Geroux, Victory to Victory drew clear to win by 2 1/2 lengths over late-running 14-1 Stormy Perfection in 1:35.24. It was another 1 1/2 lengths back to Beat the Benchmark third, while favorite Red Lodge tired late to check in 12th. 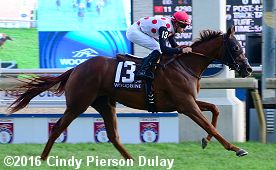 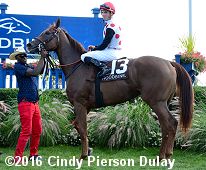 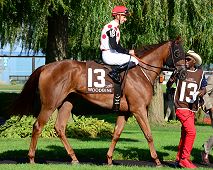 Left: Victory to Victory in the winner's circle. Norm Casse, assistant and son of trainer Mark said, "We'll have to see how she comes out of the race, but I'd have to think that's what the goal is. We think she's a really talented horse. She was well-meant from the very beginning. At Churchill, we thought enough of her to send her to Saratoga. As Florent alluded to, she was spotty early on, and I think the blinkers made a big difference. We knew she was a talented horse, and she's finally starting to figure things out."

Right: Victory to Victory in the paddock before the race. Winning jockey Florent Geroux said, "It helps to know when your horse is pretty much push-button. She broke very sharply from the gate. From there, I took a nice position, without taking any bumping. She settled very nicely, and turning for home, she gave me a very nice kick. The blinkers helped today. It made the difference. She ran spotty in her first two races." 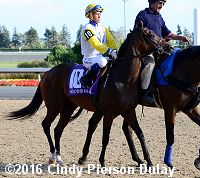 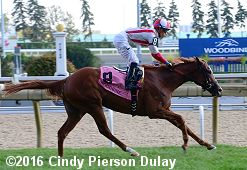 Left: Second place finisher favorite Stormy Perfection in the post parade. Jockey Luis Contreras said, "She's a really nice filly and she tried so hard. There was a decent pace in the race and the horse that won the other stake (Good Samaritan) came from last so I was pretty confident I was in good position. I knew when I asked her, she would give me everything. At mid-stretch I thought we were going to win but the winner had a little bit more."

Right: Third place finisher Beat the Benchmark runs out after the race. The 17-4 third choice raced 9th 6 lengths off the pace under Jose Ortiz, then rallied to get third beaten 4 lengths. The Chad Brown trainee improved her record to 1 win and 1 third in 2 starts, earning $68,720 for owners Klaravich Stables Inc. and William Lawrence. 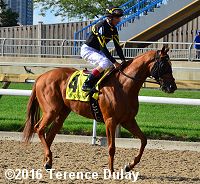 Twelfth place finisher and beaten favorite Red Lodge. The 7-2 choice pressed the pace under John Velazquez but was passed in the stretch and gave way to finish 12th beatem 12 1/2 lengths. The Wesley Ward trainee has a record of 2 wins, 1 second, and 0 thirds in 5 starts, earning $89,503 for owners Head of Plains Partners LLC and Hat Creek Racing.