After 2 scratches, a short field of just 7 older horses went to post in the $1.5 million TwinSpires Breeders' Cup Sprint (G1), a 6 furlong trip around one turn of the main track. Last year's last place finisher Masochistic was the 8-5 choice off his win in the Pat O'Brien (G1) at Del Mar. In to challenge him included 5-2 second choice A.P. Indian, winner of 5 straight including the Vanderbilt (G1) and Forego (G1) at Saratoga, and 4-1 third choice Drefong, winner of the King's Bishop (G1).

Jockey Martin Garcia sent Drefong to the lead exiting the chute through an opening quarter of 21.49 before Masochistic took over on the far turn through a half in 44.03. Entering the lane Drefong regained the front through 5f in 55.98, and pulled away late to win by 1 1/4 lengths in 1:08.79. It was just a nose back from Masochistic to late-running 15-1 Mind Your Biscuits third. 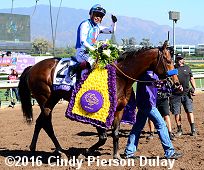 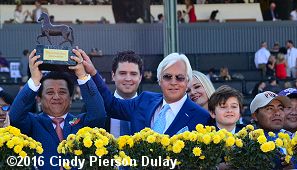 Left: Drefong heads to the winner's circle. Winning jockey Martin Garcia said, The plan was to try to go to the lead, come rolling out of there. Don't be bottled up behind horses. Unfortunately, he's not real quick out of the gate. We used Plan B, which is stay behind horses. He took a little kick back and that's where he dropped a little back in the turn. Once he realized it wasn't going to hurt him, he started picking up and finishing, you know. He's a very nice horse and I think he's getting better and better every time."

Right: The trophy presentation for the Sprint. Winning owner Susan Chu said, "Yeah, we actually started show jumping, and since all of our family -- myself, my daughter, my son -- we are all riding horses. We love horses when the kids were so young. And after that, we watched the Kentucky Derby years ago and my husband and I took our kids to Churchill Downs to watch the Kentucky Derby. It was a surprise: Oh, this horseracing is totally different. It's amazing sport. So I turned ahead to my husband and said, Charlie, let me do horseracing. How's about that?" 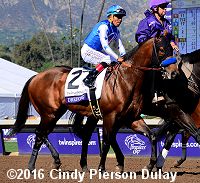 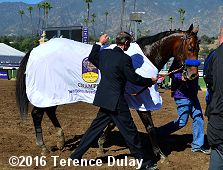 Right: Drefong heads back to the barn after the race. Winning trainer Bob Baffert said, "When I saw Masochistic out there with Mike Smith, I thought that horse is running his A-game, and I've been watching that horse train. So I knew it was going to be a battle. But the 3/8 pole it looked like Masochistic was going to have the edge on us. But, you know, this little horse and Martin, when the running started, he just brought it. And the 1/8th pole, it just shows you the will to win they have. Both horses were just champions. They were just throwing it down." 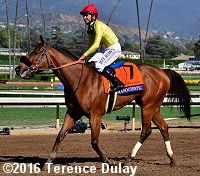 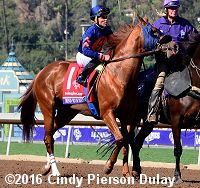 Left: Second place finisher and beaten favorite Masochistic returns after the race. Jockey Mike Smith said, "My horse ran dynamite but Drefong was tremendous. I wish there was something I could have done differently but Drefong just kept running. Every time I thought I would go get away, there he was again." Trainer Ron Ellis added, "I thought we were a winner at the 1/4 pole, but the other horse (Drefong) just dug in and outgamed us to the wire."

Right: Third place finisher Mind Your Biscuits in the post parade. Trainer Robert Falcone Jr. said, "He ran great. All respect to the two horses that beat us. He ran the race he needed to run and showed he's competitive in here. There's always that saying ‘I wish the wire was a little bit farther’ because he galloped out in front (of Drefong and Masochistic). He showed he belonged. He's a real professional. He handles himself well and knows what his job is and loves doing it. He takes it easy on himself."