The $1 million Breeders' Cup Juvenile Fillies Turf (G1) featured a field of 14 two-year-old fillies going 1 mile on the turf. Jessamine Stakes (G3) winner La Coronel was sent off as the lukewarm 4-1 choice over 9-2 Roly Poly, second in both the Lowther (G2) at York and the Cheveley Park (G1) at Newmarket, and 11-2 Hydrangea, second in the Moyglare Stud (G1) and the Fillies Mile (G1), both at the Curragh. 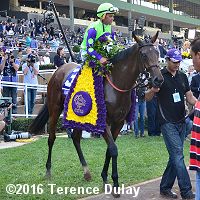 Left: New Money Honey in the winner's circle. Winning jockey Javier Castellano said, "I tried to secure my spot around the first turn and then I tried to save all the ground the best I could. She gave me a very good run down the lane and it was good enough to win the race."

Right: The trophy presentation for the Juvenile Fillies Turf with trainer Chad Brown on the far left. Brown said, "Javier gave her a beautiful trip. We talked about it, if she could break clean and be up in the forward group and somehow get clear at some point in a big field, which is a lot to ask, she'd have a good shot because she's training so well. I've had so much success with Javier, and we have great chemistry together. He studies the races very well. And if he's ridden a horse before, he learns a lot from it and applies it to the next race." 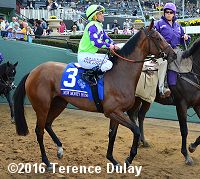 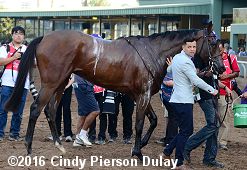 Left: New Money Honey heads out to the track before the race.

Right: New Money Honey heads back to the barn after the race. Winning trainer Chad Brown said, "A mile is just a touch short for her, and you're going to have to really work out a good trip. With all the big races next year being longer than a mile, I think this filly has an unbelievable future, and it's the first horse in this race I've ever cross-entered in the dirt race because she trains well on dirt as well. She won on the turf. Thankfully we made the right call. But it's not even out of the question that we give her a spin on the dirt before a race like the Kentucky Oaks just to be sure. I think she's that talented." 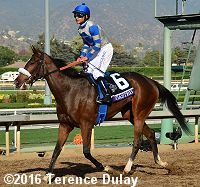 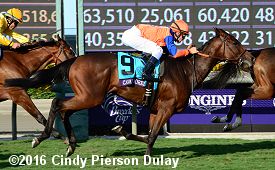 Left: Second place finisher Coasted returns after the race. Jockey Mike Smith said, “I could have had a better trip. Having said that, she’s some kind of filly. Weaving between horses with 14 horses on the turf is tough. She was gallant in her effort. Man, I look for big things from her."

Right: Third place finisher Cavale Doree crosses the finish line. Jockey Flavien Prat said, “I had a good trip. I broke a little slow and then I asked her to put herself in the race. She was rank in the first turn because she never had run on such a tight turn before. On the backside, she relaxed well and then turning for home, she made a great move." Trainer Christophe Ferland added, "We will try as hard as we did today to win the Pouliches next year. I think she will be better suited for the French tracks." 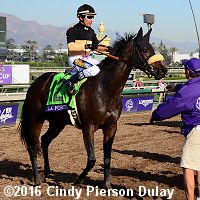 Left: Sixth place finisher and beaten favorite La Coronel returns for unsaddling. Jockey Florent Geroux said, “I was farther back than I wanted and was five, six wide so it was very difficult to win from there." Trainer Mark Casse added, “We were kind of just wide the entire trip. No real reaction yet. Just disappointed she didn't run better."