The $4 million Longines Breeders' Cup Turf (G1) is the longest race of the World Championships, for older horses going 1 1/2 miles over the Del Mar course. Sword Dancer (G1) winner Flintshire was sent off as the 9-5 choice in the field of 12, off his second place finish in the Turf Classic (G1). In to challenge him included 7-2 second choice and defending champion Found, winner of the Prix de l'Arc de Triomphe (G1) but second in the QIPCO Champion Stakes (G1) last out, and 15-4 third choice Highland Reel, winner of the King George and Queen Elizabeth Stakes (G1) and coming off his 2nd place finish in the Arc. 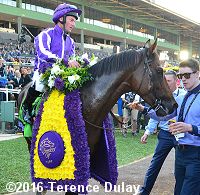 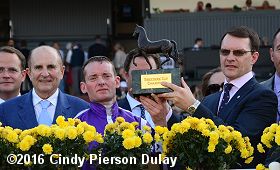 Left: Highland Reel in the winner's circle. Winning trainer Aidan O'Brien said, "We know that he handles fast ground. He doesn't mind dictating. He doesn't mind sitting in. So it was straightforward, really. But Seamus executed it brilliant. He was very happy to make the run, and when he did, he controlled the race perfectly. He kicked at the right time, and really the race was over from a long ways out. Ryan, who rode Found, said he knew there was no catching (Highland Reel) for a long ways when Seamus left the way he was in front."

Right: The trophy presentation with owner Michael Tabor (left) and trainer Aidan O'Brien (right). O'Brien added, "He has two options: the Japan Cup and the race in Hong Kong. So obviously the lads will think and talk about what they want to do. Obviously the Japan Cup is only three weeks away, and Hong Kong is then obviously three weeks after that. I don't know whether he'll be able to take in the two or whether he can take in one, but we'll see how he is. He's an incredibly versatile horse that loves traveling."Highland Reel." 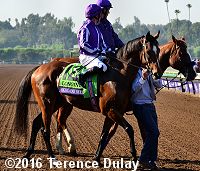 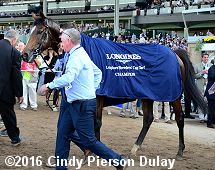 Left: Highland Reel crosses over to the turf course before the race. Winning jockey Seamus Heffernan said, "He's the type of horse that's brave in front. And when he wants to go, you let him go and he turns it on. I thought there were a few horses that were going to come from the back and come quick. So if I was going, I wanted to go early. I was happy to make him run, unless I wasn't comfortable, and I just stretched out the race, and I kicked when I should kick him, and it went very well."

Right: Highland Reel heads back to the barn. 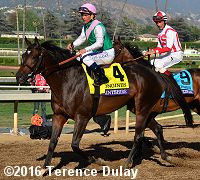 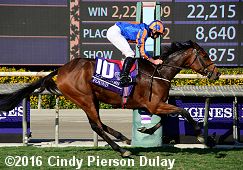 Left: Second place finisher and beaten favorite Flintshire returns after the race. Trainer Chad Brown said, "Naturally, I'm disappointed with the outcome, but I was very proud of his race today. The course is very, very firm and when you have a classy horse like that alone on the lead,  it's dangerous. We had no excuses." Jockey Javier Castellano added, "(Heffernan) tried to steal the race and he stole it. The way it worked out, it was unfortunate for my horse. Usually you don't see the European horses run so aggressively, open up and carry their speed. Especially at 1 1/2 miles but it worked out great for him."

Right: Third place finisher Found crosses the finish line. Co-owner Derrick Smith said, "I understand Ryan (Moore) said she knackered coming out of the stalls, which didn't help her case. But she ran a super race. I think just today, nothing was going to beat Highland Reel, and that's the way it was. She ran a super race, very pleased with her."