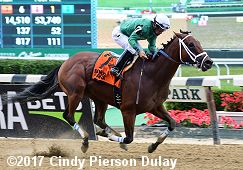 The first graded stakes on Friday was the $250,000 True North Stakes (G2) for older horses sprinting 6 furlongs on the main track. Maryland Sprint (G3) winner Whitmore was the even-money favorite in the field of 8 over 3-1 Noholdingback Bear, 2nd in the Diablo Stakes, and 9-2 Stallwalkin' Dude, winner of the Diablo after finishing 6th in the Dubai Golden Shaheen (G1). 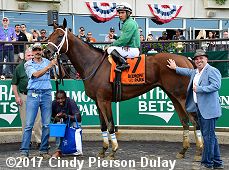 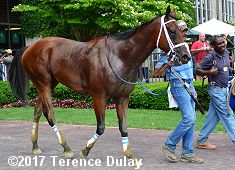 Left: Roy H in the winner's circle. Winning trainer Peter Miller said, "This is his first time running outside of California and he shipped great. He really did everything just professional, and Paco gave him a great ride. Paco's ridden winners for me in the past at Monmouth and in California when he's come out. We love Paco. He's my kind of rider: speed. If you didn't know the horse, you might think this was an ambitious spot for him. I wasn't intimidated at all by this field. I thought that if he ran his race, he'd win. I just didn't know if he'd run his race  but he showed up today and ran his race. On sheets and on Beyers, he was faster than anyone. I said why can't he repeat that? And he did. We'll take him back to California and go from there."

Right: Roy H returns to the barns via the paddock. Winning jockey Paco Lopez said, "He was ready. I didn't want to make the lead. I was in good position this time. I waited and let her go and she finished very well. I had a good break and the horse put me right there. It was an easy ride. He's good." 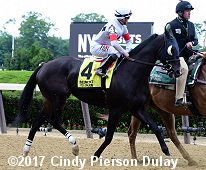 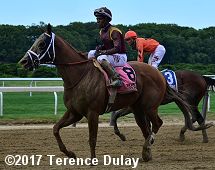 Right: Third place finisher and beaten favorite Whitmore returns after the race. Jockey Ricardo Santana Jr. said, "I was a little scared because he can blow the turn. I've always been happy when he gets a position on the inside of horses. That outside position doesn't work for him. He blew the turn today and that's why he lost the race." 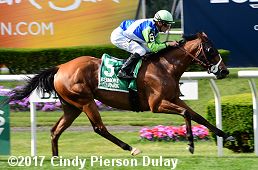 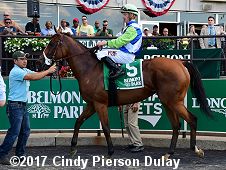 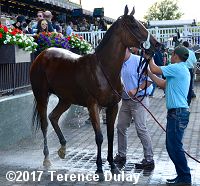 Left: Hawksmoor in the winner's circle. Winning trainer Arnaud Delacour said, "Everything set up very well for her. We were able to get a comfortable lead and Julien rode a good race. I wasn't surprised when they left her alone out there. I got a little worried when I saw the opening quarter because it looked like she was pulling a little bit, but when I saw the time at the half in 49.72 I was very happy. I knew they were going to have to come and get her and she did good. I don't really know the filly too well. But obviously, she proved today that she can run with an efficient turn of foot on firm turf which was the question mark so we're very delighted."

Right: Hawksmoor get hosed off after the race. Winning jockey Julien Leparoux said, "She can do whatever you want. She proved today that she can go 1 1/4. I think she can go even longer if we need to, so she's very versatile with distance and how the track is. She ran one time in a Group 1 in France at 1 1/4, where she ran very good, finished third (Prix Saint-Alary at Deauville). So I was expecting her to be fine with it, but it was a good group of fillies against her, so it was good to see her be able to compete and beat them. I think she'd be fine going further. The distance, I don't think, would be a problem." 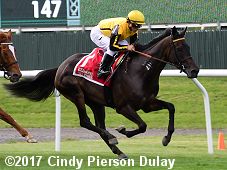 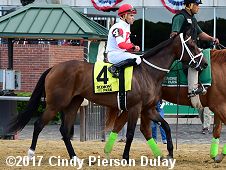 Right: Third place finisher Guapaza in the post parade. The Chad Brown trainee improved her record to 5 wins, 2 seconds, and 4 thirds in 14 starts, earning $1,045,513 for owner 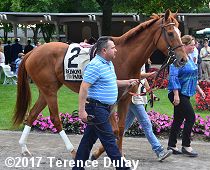 Fifth place finisher and beaten favorite Suffused in the paddock. The Bill Mott trainee has a record of 7 wins, 5 seconds, and 1 third, earning $684,499 for owner-breeder Juddmonte Farms. 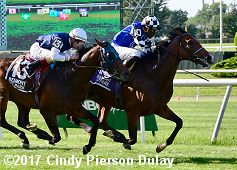 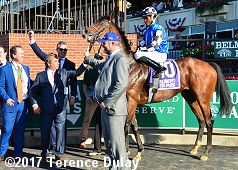 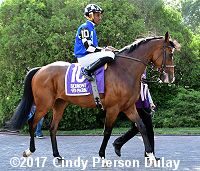 Left: Red Cardinal in the winner's circle. Winning trainer Andreas Wohler said, "He started very late in his career and hasn't had many races and keeps improving. He's progressing and we're quite happy with where he is right now. The main target is that first Tuesday in November (Melbourne Cup). He'll probably have his next race in France. He then could race in Germany or in Australia itself. We want to give him a little break before he comes back. He'll be fresh for the campaign then."

Right: Red Cardinal heading out of the paddock. Winning jockey Eduardo Pedroza said, "My plan was to go in the middle of the field and let him be behind horses. He was very relaxed. He gave me a good feeling all the way. He went very easy and was feeling very good today. I waited for a long time to ask my horse. The other horses looked like they were getting a little bit tired coming around the corner, and I said I would wait a little bit more so I could make the move. I could do that because he has good acceleration. I asked him one time and he came back and I waited a little bit more. The second time I asked, he went very easy. He has good acceleration, so he can do that." 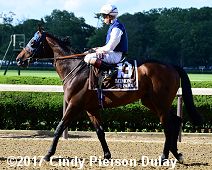 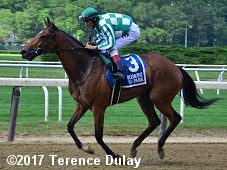 Left: Second place finisher St Michel in the post parade. The Sir Mark Prescott trainee improved his record to 4 wins, 5 seconds, and 2 thirds in 15 starts, earning $176,716 for owner-breeder the Executors of the Late J.L.C. Pearce.

Right: Third place finisher Now We Can returns after the race. The Nicolas Clement trainee improved his record to 7 wins, 2 seconds, and 5 thirds in 23 starts, earning $499,884 for owner Winfried Englebrecht-Bresges. 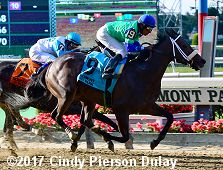 The last stakes race on Friday was the $250,000 Bed o'Roses Invitational (G3) for older fillies and mares sprinting 7 furlongs on the main track. Vagrancy Handicap (G3) winner By The Moon was sent off as the 5-4 favorite in the field of 9 over 7-2 Lightstream, 5th in the Humana Distaff (G1), and 11-2 Indulgent, 5th in the Ruffian (G2). 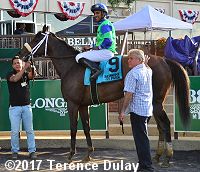 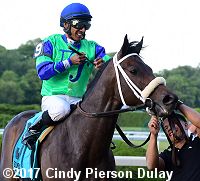 Left: By the Moon in the winner's circle. Winning trainer Michelle Nevin said, "She showed up again as usual. She always tries and it was another great effort. A ride by Rajiv and it was all good. She looked so comfortable and he had her in a perfect spot. When he asked her to pick up her gears she was right there for her. She looked awesome today coming into the race. I just felt so confident with her today. I loved Rajiv's attitude when he came out to the paddock. It all felt good."

Right: By the Moon returns after the race. Winning jockey Rajiv Maragh said, "On paper it looked like there wasn't much speed other than Mia Torri, so I was hoping for a good break. I had a great post on the outside to kind of see how the race was unfolding. She broke really well from the gate and she always was running strong into the bridle. I was pretty confident the way she was running that she was going to finish up good. Once we got to the lane I gave her a little cue and she did the rest from there." 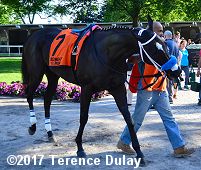 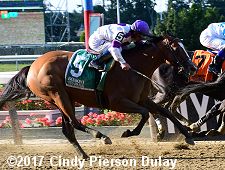 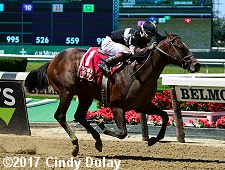 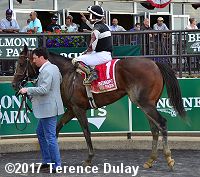 Winning trainer Horacio DePaz said, "Obviously, this is kind of his style: to make a run. In his first race, he lost his marbles in the post parade; he was hollering. They loaded them in the gate. He broke, and he didn't leave which he'd never done in the morning. He was really professional. So that's why we were bringing him back in two weeks. We're hoping that running him will mature him, but once he's running, he's really professional. We got lucky today. We'll probably go to Saratoga with him and try to keep him campaigning."

Jockey Ricardo Santana Jr. added, "The first time he ran, he broke bad and he still won the race. He's a class horse. Today, when he broke, he was closer than the last time. At the 3/8, I just tapped him on the shoulder, and I then just waited. Turning for home, I took him to the outside and the second that he saw he was in the clear, he took off running again. I've never won a stakes race here at Belmont, so it's very exciting to win my first. I am happy to be here."