The $1.5 million Preakness Stakes (G1) is the second jewel in the Triple Crown. A field of 10 three-year-olds contested the 142nd renewal of this 1 3/16 mile classic around two turns at historic Pimlico Race Course in Baltimore, before a record 140,327 in attendance, topping the old record set last year of 135,256. In addition the 14-race handle was $97.17 million, also a new record. Sal Sinatra, Maryland Jockey Club president said, “From morning into evening, we witnessed an incredible day of world-class racing and eclectic entertainment. The sport of Thoroughbred racing is being rejuvenated and reimagined by the Stronach family. Their commitment to this sport is remarkable and unparalleled. Their vision is being embraced by horsemen and fans around the country. We want to thank the fans who came to Pimlico Saturday as well as the horsemen who supported our program this weekend. And, of course, the incredible equine athletes for their spirit and beauty.”

After heavy overnight rains, the main track began the day as "muddy" later upgraded to "good", but for the main event, track officials called it "fast" (despite still being quite wet), with a post time temperature of 67 degrees under dark overcast skies. As expected, Florida Derby (G1) and Kentucky Derby (G1) winner Always Dreaming was sent off as the 6-5 favorite. In to challenge him included 2-1 second choice Classic Empire, Breeders' Cup Juvenile (G1) champion who was fourth in the Derby after winning the Arkansas Derby (G1), and 9-1 third choice Lookin at Lee, runner-up in the Derby after finishing third in the Arkansas Derby.

As expected jockey John Velazquez sent favorite Always Dreaming to the front immediately but he was hounded to his outside by Classic Empire and jockey Julien Leparoux as the pair clicked off quick fractions of 23.16, 46.81, and 1:11.00 while stalked by 13-1 Cloud Computing drafting in behind them. On the far turn Always Dreaming tired as Classic Empire surged to the front, opening up a 3 length lead through 1 mile in 1:36.63. However, Javier Castellano angled Cloud Computing out for room and collared Classic Empire at the 1/16 pole, outfinishing his rival in the final strides to win by a head in 1:55.98. It was a long 4 3/4 lengths back to late-running 32-1 Senior Investment third, while Always Dreaming tired to finish 8th beaten 14 lengths. 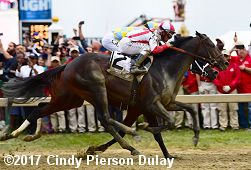 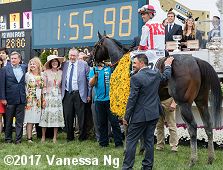 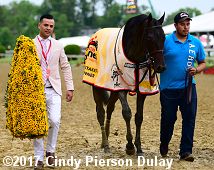 Left: Cloud Computing in the winner's circle. Winning jockey Javier Castellano said, "I think I have a lot of confidence with the horse," said Castellano, who also won the 2006 Preakness with Bernardini. "I never had the opportunity to ride the horse. But the way I saw it at races and the analysis (I had made me want to ride). Mr. (Chad) Brown gave me the opportunity to ride the horse and I'm thankful for that."

Right: Cloud Computing heads back to the barn. Co-owner Seth Klarman, who grew up in Baltimore said, "Some of the reason that we won today was because we were patient and didn't throw an inexperienced horse against a 20-horse field in the Derby on a very difficult track. I was a big fan of racing when I was a kid, started out as a teenager handicapping, enjoying the puzzle of trying to figure out who might win a race, and I came to the Preakness many, many times. I never imagined I'd own a horse, let alone be the winner of the Preakness. Chad had a brilliant plan to bring the horse here and a brilliant plan for how the race was going to be run. Javier executed just perfectly on Chad's plan and here we are right now. This is the culmination of 25 years of hard work and learning and trying to figure this game out." Klarman added this is a great birthday present as he turns 60 on Sunday. 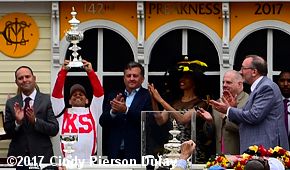 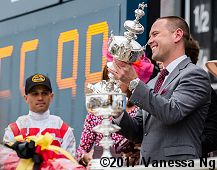 Right: Trainer Chad Brown holds the trophy. Winning trainer Chad Brown said, "Do I think he's a 1 1/2 mile horse? He's never really struck me that way, but I'm not going to rule it out. Let's see how he comes out of it and who is running and get a feel for it. I'll leave it as a possibility right now. I feel like it's been a lifetime for me because you've got to put a lot of time in. I've been training now for 10 years. We've run four horses in the Derby. This is our first Preakness try. But I personally put a lot of time, and my staff's put a lot of time in. When you add the time as an assistant trainer, for two great trainers (Shug McGaughey and the late Bobby Frankel), it feels like I've been doing it forever, really." 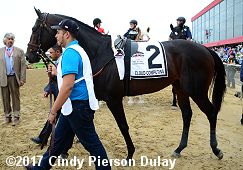 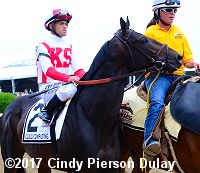 Left: Cloud Computing walks over to the infield saddling area. Castellano added, "My father was a jockey for 25 years, my uncle, my brother... we grew up all racing, it's very special for us. We've been working for a long time for this moment. It's great for the family." This is his second Preakness win after Bernardini in 2006.

Right: Cloud Computing in the post parade. Brown added, "I'm not going to dispute the fact that I brought a fresh horse as part of our strategy. Classic Empire and Always Dreaming are two outstanding horses and our strategy was, if we are going to ever beat them, let's take them on two weeks' rest, when we have six, and it worked. (Castellano) rode an excellent race. I'm glad we did it together." 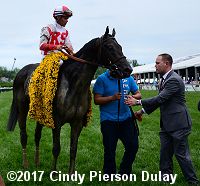 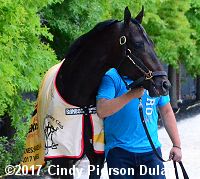 Left: Cloud Computing with his flowers and trainer Chad Brown. Brown said, "I'm so happy for the owners, Seth Klarman and Bill Lawrence, especially Seth, he grew up in Baltimore. He used to come out to the infield and buy his seat and watch racing, it's how he got involved. He's put a lot of time and money into the game, he's very deserving, his birthday is tomorrow, everything lined up."

Right: Cloud Computing comes back from the test barn. 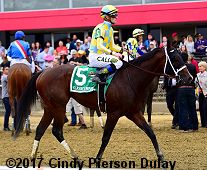 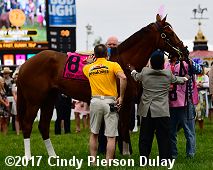 Left: Second place finisher Classic Empire returns after the race. Trainer Mark Casse said, "I thought he ran outstanding. I always worry about him starting because he stumbles a little bit. He won the Breeders' Cup Juvenile going out after it and I said to Julien, 'Second doesn't mean anything. Let's go and try to win this thing.' It ended up getting us in the end. We were going to be in it, and he said, 'OK.' We were going to be aggressive and that's what we did."

Right: Third place finisher Senior Investment gets saddled before the race. Trainer Ken McPeek said, "He showed me he could compete against these kind and has continued to improve. He's a really good horse with a huge future and I think we're just getting started with him. 1 1/2 miles of the Belmont is going to be really up his alley. The two who finished in front of him are obviously really good horses, but maybe if we would have had a little cleaner trip, we maybe could have finished closer." Jockey Channing Hill added, "I got a little stopped around the first turn when (Hence) got the jump on me. I had to step on the brakes a little bit. Halfway down the lane, he showed his heart. I couldn't be happier with this colt. He's got a legitimate chance to win the Belmont. See you in New York." 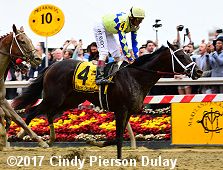 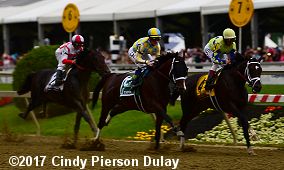 Left: Eighth place finisher and beaten favorite Always Dreaming at the finish. Trainer Todd Pletcher said, "He (Leparoux aboard Classic Empire) probably went pretty ambitiously at us and maybe cost himself the race, but we didn't have an excuse. We were in the position we expected to be and I think the turnaround was a little too quick. He ran so hard in the Derby and today just wasn't his day. He didn't seem to relish the track, but I really don't think that was it. It was just that he put so much into the Derby that it wasn't meant to be. You've got to let the dust settle a little bit and not let your emotions get involved. We'll see (about the Belmont). Initially it looks like he came back well. We'll savor the Derby victory." Jockey John Velazquez added, "I knew I was in trouble on the backstretch when the other horse got to him, almost head to head, and engaged him. You could see he just got beat. I knew he didn't have it."

Right: First time by with Always Dreaming leading over Classic Empire and Cloud Computing. Always Dreaming's trainer Todd Pletcher said, "I was a little concerned coming by the wire the first time. He was there, but it wasn’t like he was dragging (jockey) Johnny (Velazquez) there, actually. It felt like he was on a loose rein by the time they turned up the backside. That’s kind of what we anticipated Classic Empire would do, take it to us, but he just didn’t have that reserve today."