The record 140,327 in attendance at Pimlico for the Preakness Stakes (G1) were treated to a marathon 14-race card with the first race off at 10:30am. Conditions were less than ideal, after heavy overnight rains soaked the main track to muddy at the start of the card (upgraded to good in time for the Chick Lang Stakes) and the turf course to good, with temperatures in the mid 60's under dark overcast skies. 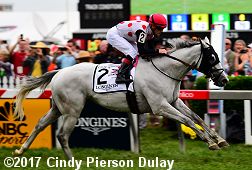 Jockey Florent Geroux sent 17-1 Security Risk to the lead first time by through fractions of 24/12. 49.43, 1:13.94 while pressed by World Approval and stalked by 33-1 One Mean Man and Projected. On the far turn jockey Julien Leparoux sent World Approval to the front through 1 mile in 1:37.28. Kept to task by Leparoux, World Approval drew off to win by 2 1/4 lengths in 1:43.15 over the good turf course. It was another 2 1/4 lengths back to 4-1 Blacktype third.
Full results chart from DRF 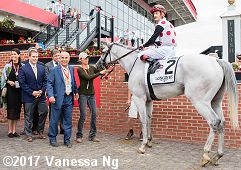 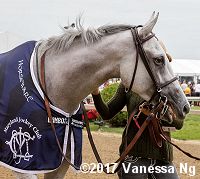 Left: World Approval in the winner's circle. Winning trainer Mark Casse said, "He's really good right now, this horse. His last couple of works were crazy. It's funny, this winter he struggled along, but then he really came around."

Right: World Approval heads back to the barn. Winning jockey Julien Leparoux said, "I was very comfortable, very relaxed laying second. He's a nice horse. We went slow to the half, he was doing it very easy, and he kicked very nice at the end. He's a nice horse and we got the perfect trip today, the ideal trip anyway. The track was good for him and there was not too much speed in the race, so the plan was to be right up there and relax. At the 3/8, he started grabbing the bit. He was really good last year. Maybe one of two races weren't that good, but he won a Grade 1 last year. This year I think he's the same or better, and we'll have a good year with him." 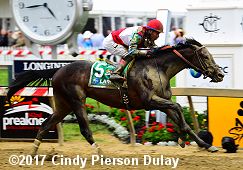 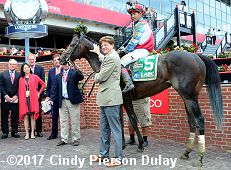 No Mo Dough in the winner's circle. Winning jockey Jose Ortiz said, "He broke great today. The last couple times he broke kind of slow. He put me in a good position. He was relaxed where he was and when I asked him to run at the 3/8 pole I felt like I had plenty of horse. He's still a little green, but he's a nice horse." Trainer Graham Motion added, "Jose told me the other day at Churchill the horse didn't even know what he was doing, and he still won. He just came out of the race so well. To come back in three weeks (for the Belmont Stakes) would be a lot. I want to look after him now. He's a really cool horse." 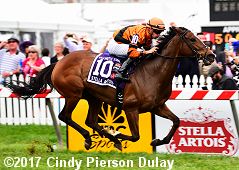 A field of 8 older fillies and mares contested the $150,000 Gallorette (G3) over 1 1/16 miles on the turf. Hillsborough (G2) runner-up Elysea's World was the even-money choice over 5-2 On Leave, 4th in the Queen Elizabeth II Cup (G1), and 9-2 Cambodia, third in the Dahlia. Jockey Luis Rivera sent 66-1 Come to Mischief to the lead first time by and she set fractions of 24.63, 49.78, and 1:14.31 over the good course while pressed by Cambodia and stalked by On Leave. Turning for home, jockey Florent Geroux sent Cambodia to take over through 1 mile in 1:38.42. Kept to task by Geroux, Cambodia drew off to win by 2 lengths over On Leave in 1:44.35. It was 1/2 a length back to late-running favorite Elysea's World third.
Full results chart from DRF 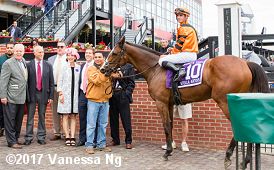 Cambodia in the winner's circle. Winning jockey Florent Geroux said, "She was very sharp from the gate. We in a great spot just off the horse on the lead. I kept her relaxed and turning for home she responded very well." Trainer Tom Proctor added, "From where she was at, I'd have been disappointed if she got beat. I had a perfect go, slow pace. It was nice to have it work out." 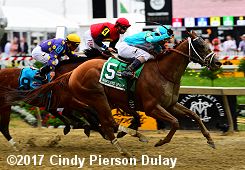 The $150,000 Maryland Sprint Stakes (G3) featured a field of 9 older horses sprinting 6 furlongs on the main track. Count Fleet Sprint (G3) winner Whitmore was the 6-5 favorite over 8-5 A.P. Indian, second in the Commonwealth (G3), and 9-2 Holy Boss, third in the Count Fleet. Jockey Joe Bravo sent A.P. Indian to the front exiting the chute through fractions of 22.97 and 45.67 while pressed by Holy Boss and stalked by 32-1 Awesome Banner Turning for home A.P. Indian continued to lead through 5f in 57.54 but Whitmore, 4th early, came out 5 wide and rallied under Ricardo Santana Jr. to win by 1/2 a length in 1:09.90. It was a head back to Awesome Banner third.
Full results chart from DRF 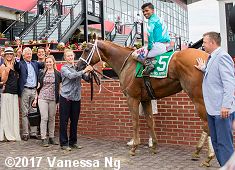 Whitmore in the winner's circle. Winning trainer Ron Moquett said, "I'm happy we came over (from Churchill Downs). I said that it was going to take a track record to win this, but that was before the rain yesterday. I know he's a fast horse and he's running against very fast horses. I've got a lot of confidence in Ricardo. I told him that he was on the best horse and ride him with confidence. I know how he finishes. He closes like a freight train. Our goal is the Breeders' Cup Sprint." 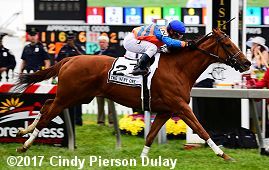 Kicking off the Preakness day stakes action, a field of 9 older fillies and mares sprinted 5 furlongs on the turf in the $100,000 The Very One Stakes. Jockey Javier Castellano sent 3-1 favorite Everything Lovely to the lead immediately through fractions of 22.46 and 45.79 over the good going, while pressed by 7-1 Eila and stalked by 3-1 Pretty Perfection. Entering the stretch Everything Lovely opened up a 3 length lead. 10-1 Sunnysammi attempted to close from 6th but Everything Lovely easily held her off by a length to win in 57.93. It was a head back to 11-1 Elusive Joni third, who nosed out Pretty Perfection in fourth.
Full results chart from DRF 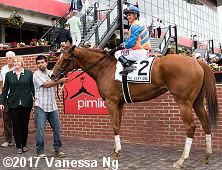 Everything Lovely in the winner's circle. Winning trainer Kate Demasi said, "This is big for us, just for her future as a broodmare and knocking on the door against a lot of nice fillies. I just told Javier to break good. I thought she had the most natural speed in here. It's real special. This is really big for me. I've always loved coming here." Jockey Javier Castellano added, "I loved the way she did it. She is a pretty sharp filly. I got a great spot, I knew there was a lot of speed outside me and I took advantage of being on the inside and took the lead. It was a good pace for her. She just galloped along. She can go in 21 and she rated beautifully and I think that was the key to the race." 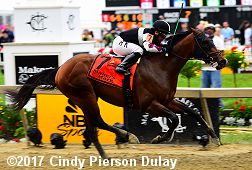 The $200,000 Maker's Mark Chick Lang Stakes featured a field of 8 three-year-olds sprinting 6 furlongs on the main track. Jockey Horacio Karamanos sent 5-2 second choice Recruiting Ready to the front exiting the chute through fractions of 22.98 and 45.96 while pressed by 15-1 Bobby Abu Dhabi and stalked by 11-1 Aquamarine. Into the lan Recruiting Ready opened up by 3 lengths through 5f in 57.85, and drew off to win by 3 3/4 lengths over Aquamarine in 1:10.35. It was another 3/4 length back to 6-5 favorite Three Rules third.
Full results chart from DRF 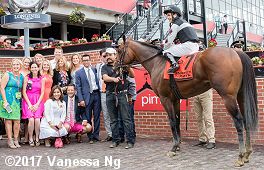 Recruiting Ready in the winner's circle. Winning trainer Horacio DePaz said, "The horse does best when he's on the lead. We kind of let him free run a little bit. If you take too much hold of him, he really isn't going to settle. He's a strong horse. I was surprised those other horses went with him, but I was comfortable with where he was at the whole way around. He settles a little bit and he's making that run at the end. He's also been campaigned pretty hard, so I want to take care of him and maybe focus on Saratoga or something." Jockey Horacio Karamanos added, "He gave me a nice kick at the top of the stretch and was very strong today. He's a really good horse who ran against some of the best in the country last year. We are 3-for-3 together, so I think we're a good match." 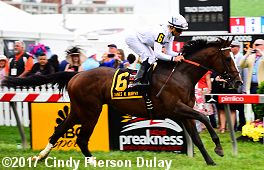 A field of 12 three-year-olds went 1 mile on the turf in the $100,000 James W. Murphy Stakes. Jockey Luis Saez sent 7-2 second choice Mo Maverick to the lead first time by through fractions of 22.97, 46.91, and 1:11.81 over the good going while pressed by 10-1 Adonis Creed and stalked by 33-1 Berks County. Mo Maverick continued to lead to the 1/8 pole but 11-4 second choice Yoshida, last early under Joel Rosario, came out 3 wide into the stretch for room and rallied by to win going away by 4 lengths over 19-1 Chubby Star in 1:36.83. It was a head back to Mo Maverick third, while 5-2 favorite Dover Cliffs checked in 9th.
Full results chart from DRF 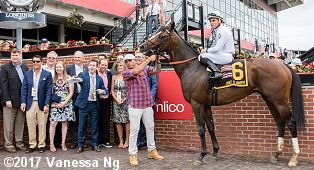 Yoshida in the winner's circle. Winning trainer Bill Mott said, "That was very impressive. He rolled home an easy winner, it looks like. He had his ears pricked and doing it the right way." Jockey Joel Rosario added, "I thought I was going to be closer. He was very happy where he was. I just let him do his thing, and then he put in a very nice run at the end. He's a very nice horse."