The filly counterpart to the Preakness is the $250,000 Black-Eyed Susan Stakes (G2) held on the Friday before Preakness day. The 50,339 on hand at Pimlico enjoyed partly cloudy skies and temperatures in the low 90's early in the card, but heavy rain fell during the Jim McKay Turf Sprint downgrading the main track to sloppy for the feature and dropping the temperature down to the low 80's. A field of 11 three-year-old fillies went to post for this 1 1/8 mile main track contest, with Shimmering Aspen sent off as the lukewarm 7-2 favorite off three straight allowance wins and making her stakes debut here. In to challenge her included 4-1 second choice Moana, who broke her maiden last out at Keeneland, and 9-2 third choice Summer Luck, 5th in the Ashland (G1).

Jockey Jesus Castanon sent 8-1 Tapa Tapa Tapa to the lead first time by and she set fractions of 23.12, 46.38, and 1:11.56 while pressed by 11-1 Full House and stalked by Moana and Shimmering Aspen. On the turn Tapa Tapa Tapa tired as Shimmering Aspen inherited the lead through 1 mile in 1:38.56 before tiring as well. 13-1 Actress, 9th early under jockey Nik Juarez, saved ground the whole way and then rallied late to get up by a head over Lights of Medina in 1:51.87. It was another 2 lengths back to 26-1 Corporate Queen third, while favorite Shimmering Aspen checked in 7th. 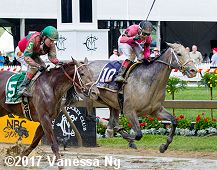 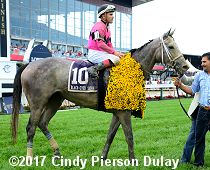 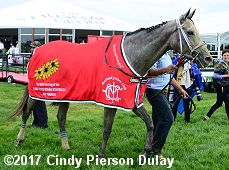 Left: Actress heads to the winner's circle. Winning trainer Jason Servis said, "I always liked this filly. I told them she's a good filly from Day 1. I've got to hand it to the Wests. They were on board the whole time and a lot of owners wouldn't be. But they've been great. They're good for the business. They deserve it. They love the game. It's not just the money; they've got a passion for it. It's all good stuff. I really wasn't concerned about an off track. With her pedigree she should run on anything. It didn't make any difference (that Actress was a maiden). I like my filly."

Right: Actress heads back to the barn after the race. 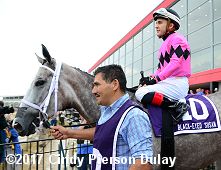 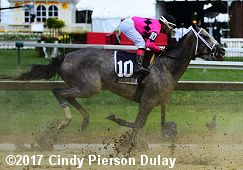 Left: Actress heads out to the track before the race. Winning jockey Nik Juarez, celebrating his first Black-Eyed Susan win, said, "We knew from running out of the six-furlong chute that she was a runner. I found she really liked being behind the dirt. I said, 'Let's send her around two turns,' and Jason said the same thing. We knew she would get a distance. They were running fast up front and I was sitting behind. She ate the dirt up. When she made her move, she really started running and carried it on." Juarez grew up in nearby Westminster, Maryland.

Right: Actress racing in 9th first time by. No wonder she was so muddy after the race. 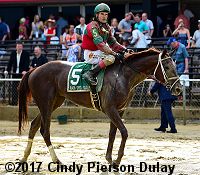 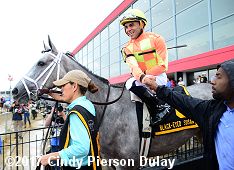 Left: Second place finisher Lights of Medina returns after the race. Trainer Todd Pletcher said, "I thought Lights of Medina ran great. It was a tough beat. She just missed a head bob. It was a great effort by her. I thought she perhaps was going to get [Actress}, but she didn't." Jockey Feargal Lynch added, "I thought I'd be a lot closer. She got outrun early so I left her alone. I got her in the clear and gave her a nice wide trip and a fair shot at it. She's a grinder. I used up so much to get her there. She gave everything she had."

Right: Third place finisher Corporate Queen heads out to the track. Trainer Mark Casse said, "I forgot we weren't wearing Gary Barber's silks. So I'm looking for the other pink, because she wore Bobby Flay's (orange and yellow) silks. I thought it was great. I'll have to watch the replay, since I missed her through the race. But the finish was a nice surprise." Jockey Joel Rosario added, "She broke OK. They were rolling. They were coming and coming. She took her time to get into the race and then she makes a nice run. She has a nice run and the track surface didn't bother her at all." 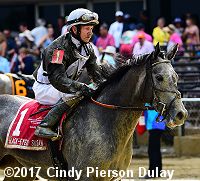 Left: Seventh place finisher and beaten favorite Shimmering Aspen returns mud coated after the race. The 7-2 choice stalked the pace in third 3 lengths off the pace under Steve Hamilton, but tired after 7f and finished 7th beaten 10 3/4 lengths. The Rodney Jenkins trainee has a record of 3 wins, 0 seconds, and 1 third in 5 starts, earning $76,790 for owner Hillwood Stable LLC.

Right: Shortly after the start of the Black-Eyed Susan. Ron Moquett, trainer of eventual 4th place finisher Torrent (8 horse, far left) said, “I was pleased with the effort of the horse and the rider (Jose Ortiz). I didn’t know how she would take to the slop. It took her a little bit to figure it out. We didn’t even know if she was going to try, and then she did. She made an account of herself. We’ll get them next time.” 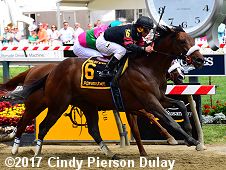 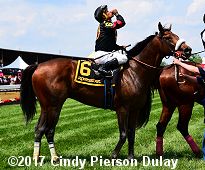 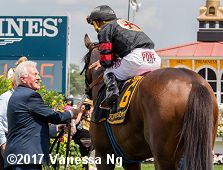 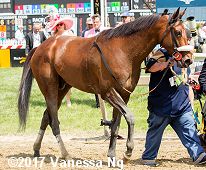 Left: Owner Frank Stronach leads Shaman Ghost to the infield winner's circle. Winning trainer Jimmy Jerkens said, "Dolphus had his own way," Jerkens said. "He wasn't exactly walking, but he got 3/4 in 1:12. The way the track was playing today, I thought he had a shot to hang on. Shaman had a little too much for him, but Dolphus ran terrific. It's terrifict to run 1-2... It's great to win for Mr. Stronach at his track, and it's great to keep Shaman going."

Right: Shaman Ghost heads back to the barn. Winning jockey Javier Castellano said, "I could have gone to the lead any time, but I didn't want to. He's very straightforward. You can put him wherever you want. I love the horse and I have so much confidence in him, because he reminds me of his father. Ghostzapper was such a great horse. He got better the more he matured. This is such an honest horse. Jimmy Jerkens did a great job for him. He takes his time and picks out good spots." 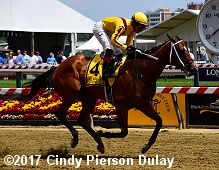 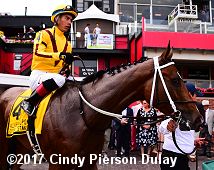 Kicking off the Preakness weekend stakes was the $150,000 Allaire DuPont Distaff Stakes (G3) featuring a field of 7 older fillies and mares going 1 1/8 miles on the main track. Apple Blossom (G1) runner-up Terra Promessa was sent off as the 11-10 favorite over 11-4 Carrumba, 4th in the Vagrancy (G3), and 3-1 Mo'Green, winner of the Top Flight (G3). Jockey Jose Ortiz sent Terra Promessa to the front first time by through fractions of 23.80, 47.13, and 1:10.91 while stalked by Carrimba and Mo'Green. Turning for home Terra Promessa left the field in her wake, opening up by 8 through 1 mile in 1:35.67. Geared down and drifting out late, Terra Promessa finished 7 1/2 lengths ahead of Carrumba in 1:49.12 over the fast main track. It was another 2 1/4 lengths back to Mo'Green third.

Winning trainer Steve Asmussen said, "She's a wonderful filly and being by Curlin it makes it special. Jose rode her twice previously and both were wins. He knows the filly. Obviously, she's better now than she's ever been. Her last race against Stellar Wind was her fastest. For her to respond like this after such a demanding race speaks volumes to her personality and durability." Jockey Jose Ortiz added, "I was more than happy to be in front early. I didn't think anybody was going to go with her. I asked her to run about the 3/8 pole and I just showed her the whip in the stretch. She's really nice." 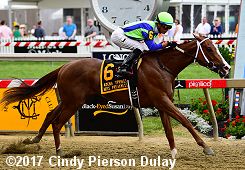 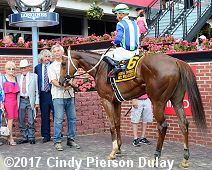 Winning trainer Steve Asmussen said, "She needs things to go her way to show her best. The key was finding that race at Prairie Meadows, so she could remember what she's good at. She got away from the gate cleanly. That's been key for her. Jose did a great job getting her away from the gate. I thought she ran very powerfully from there. I felt she was fast enough for this group off her last race. She had a rough trip the time before, so I was concerned about her confidence. This did exactly what I hoped it would." Winning jockey Jose Ortiz added, "She broke well. I had to put her there because of the size of the field. I was in great position going into the turn. I was third in the clear. I waited and waited, then she jumped into the bit, so I knew I had a horse when I asked her." 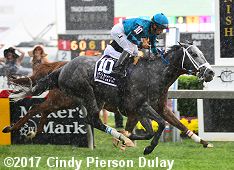 The $100,000 Jim McKay Turf Sprint featured a full field of 14 older horses going 5 furlongs on the turf, contested under heavy rain. Silks Run winner Pay Any Price was the 8-5 favorite over 3-1 Richard's Boy, fifth in the Al Quoz Sprint (G1), and 6-1 Amelia's Wild Ride, unraced since 2nd in the 2016 Silks Run. Jockey Edgard Zayas sent Pay Any Price to the lead down the backstretch through fractions of 21.93 and 44.43 while pressed by Richard's Boy and stalked by 57-1 Ungle Youdge. Turning for home, jockey Paco Lopez asked Richard's Boy to challenge and the pair hooked up for a long drive. Richard's Boy prevailed by a neck in 56.20 over firm going. It was another 1 1/4 lengths back to Amelia's Wild Ride third. 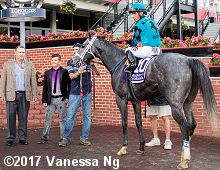 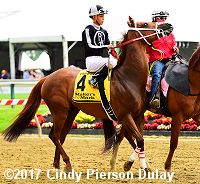 Left: Richard's Boy in the winner's circle. Winning trainer Peter Miller said, "He's a barn favorite. I'm so happy for the horse and the team. They were the same people who went with him to Dubai. When I saw the rain start to come down, I thought it might affect other horses but would not affect him. He's a bulldog. We're thinking of using this race as a prep for Royal Ascot." Jockey Paco Lopez added, "I felt very comfortable. And the trainer said on the phone, 'Paco, whatever you want, you'll be in a good position. Second or third, the horse runs everywhere.' He's a very nice horse, a very tough horse. I was on the right horse in the race."

Right: Second place finisher and beaten favorite Pay Any Price in the post parade before the rain started. 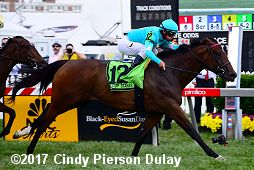 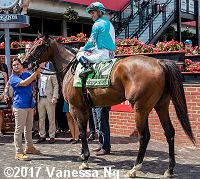 Winning trainer Graham Motion said, "In the morning, she's kind of not very glamorous. But she's very game in the afternoon, and you have to admire that. We weren't crazy about the post here, but with all the scratches, it worked out. We hated being in the 12 hole, and we wanted to see what (the Soaring Softly Stakes at Belmont) looked like. But I think the mile is an ideal trip for her. We've kind of waited for this race since Florida. She's also been running pretty hard. We'll see. We're going to decide this week what we're gonna do, whether we're going to go to England (Royal Ascot) or stay here and run in the Just a Game." 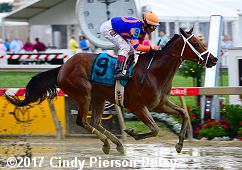 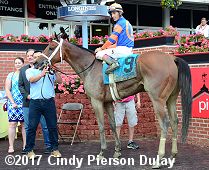 Closing out the Friday stakes action, the $100,000 Skipat Stakes featured a field of 7 older fillies and mares sprinting 6 furlongs. Jockey Florent Geroux sent 5-2 second choice Chanteline to the lead through fractions of 22.98 and 46.02 while pressed by 7-5 favorite Clipthecouponannie and stalked by 9-2 third choice Summer Reading. Entering the stretch, jockey John Velazquez sent Clipthecouponannie 2 wide to the front through 5/8 in 58.09, and drew off to win by 1 1/2 lengths over Summer Reading in 1:10.93. It was another 1/2 length back to 11-1 Sweet On Smokey third.

Winning trainer Todd Pletcher said, "I was a little concerned when it rained, only because she had never run on an off track," Pletcher said. "But we felt like with her pedigree that she would handle it. [Sire] Uncle Mo won the Kelso impressively in the slop. I talked to Johnny before, and we liked the fact that we drew a favorable post for these kind of conditions. She's been a good filly away from the gate. We wanted to get away alertly, put her in a forward position, and she did that very well. I could tell Johnny was riding her very confidently."