The $600,000 Apple Blossom Handicap (G1) is the major race for older fillies and mares at Oaklawn Park, kicking off closing weekend at the historic Hot Springs oval. An estimated 20,000 were on hand on Friday afternoon for this 1 1/16 mile trip under partly cloudy skies and temperatures in the low 80's. Stellar Wind was sent off as the prohibitive 2-5 choice in the field of 6, unraced since finishing fourth in the Breeders' Cup Distaff (G1) after winning the Clement L. Hirsch (G1) and the Zenyatta (G1). In to challenge her included 5-2 second choice Terra Promessa, winner of the Bayakoa (G3) before finishing fifth in the Azeri (G2), and 7-1 third choice Streamline, winner of the Azeri and second in this race last year.

Jockey Jose Ortiz sent Terra Promessa to the lead first time by and she set fractions of 23.88, 48.22, and 1:12.59 over the fast main track while pressedby 46-1 Durango and stalked by Stellar Wind. At the top of the lane jockey Victor Espinoza moved Stellar Wind 3 wide for room and she took over at the 1/8 pole through 1 mile in 1:36.44. Kept to task by Espinoza, Stellar Wind drew off to win by 1 1/4 lengths over Terra Promessa in 1:42.75. It was another 3 1/4 lengths back to Streamline third.

Also check out Classic Empire winning the Arkansas Derby and Inside Straight winning the Oaklawn Handicap during the Racing Festival of the South at Oaklawn. 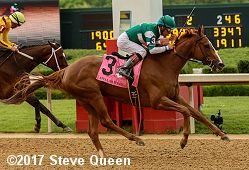 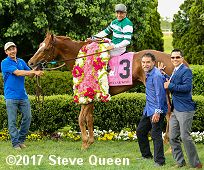 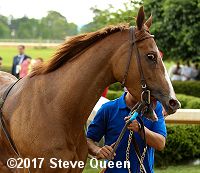 Left: Stellar Wind in the winner's circle. Winning owner Kosta Hronis said, "She wanted another year under her belt, she wanted to race. She's in great shape, so we thought we'd keep her on the track at least another year. We're happy with her comeback race. Just really proud of her."

Right: Stellar Wind heads back to the barn. Winning trainer John Sadler said, "There's plenty of reservations, always with good horses, that you're doing the right thing (bringing them for another season). After her 3-year-old year, we talked about going two more years. She's a late-maturing filly, and we thought she had a chance to be her best at 4 and 5. Kosta said last year, 'If you think she's going to be good, we don't want to stop on her.' She came out of the Breeders' Cup in good shape, gave her a little rest and got her back here. I was happy she had an eye on (Terra Promessa). I didn't want that horse to get too easy a lead. So he was stalking her from the inside, then he came to the outside. I knew as long as Victor had an eye on the 1 horse, we'd be in good shape. She's got a nice kick and a lot of ability to go the distance. We'll get her home and look at the races around the country. We'd like to run once at home. It's her home base. Probably run in the Beholder (formerly known as the Vanity)." 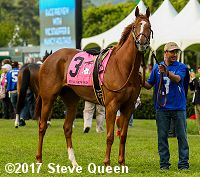 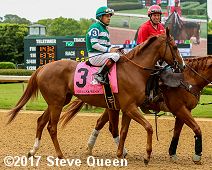 Left: Stellar Wind in the infield saddling area . Winning jockey Victor Espinoza said, "Listen, when I win, nothing is heavy. I mean, these (flower blanket) weigh more than me. But now that I win with Stellar Wind, I feel like they are light. In the first turn, I thought my trip was not so good because I got stuck in behind the leaders on the inside. I think, OK, if the outside horse doesn't get tired at the end, I might have some trouble. But it worked out well. Because the other one couldn't keep up with the leader. I had a little time to move out and just move forward to attack the one on the lead. I think she's better than before. I always believed in her. As she's gotten older, she's more mature, more professional. But it seems like this year, she's coming back great, and maybe even a little better than last year. I really do want her to run in the Breeders' Cup and get her a win. She's had a little bit of bad luck the last two times. The first time, she got carried a little wide and I just got beat at Keeneland. Last time, she missed the break and that was it. The race was over for her. Hopefully this will be her year."

Right: Stellar Wind in the post parade. Co-owner Stephanie Hronis added, "Just honored to be part of the journey with her. She's special." 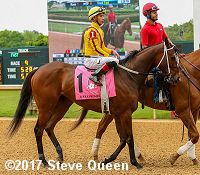 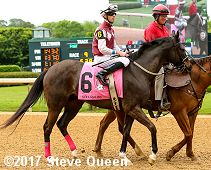 Left: Second place finisher Terra Promessa in the post parade. Trainer Steve Asmussen said, "As bad as the Azeri went, I think she rebounded from that. No aftereffects from the trip in the Azeri and she ran her race today. She got beat by arguably the best mare in the country, and she'll go to Churchill Downs from here. And if we think she needs a little time, (owner) Stonestreet, the farm where she spent a lot of time at, is right there. But she ran a very good race today to be second to a champion." Jockey Jose Ortiz added, "I think she ran great. She broke great and ran the half in: 48 1/5 which was perfect I think. When I asked her to go, she gave me a great turn of foot. The other filly did so well too. We went head to head and she beat me today, but my filly gave a great effort."

Right: Third place finisher Streamline in the post parade. Jockey Chris Landeros said, "She ran good, no excuses. (If I could do something differently) I would have stayed with Terra Promessa." Trainer Brian Williamson added, "She ran good, we were just third best. It isn't any shame to get beat by those two, I'm going to tell you that. That's all we can ask for. Looked like she pulled up good."

Immediately before the Apple Blossom, a field of 12 three-year-old fillies contested the $400,000 Fantasy Stakes (G3) going 1 1/16 miles at Oaklawn Park, with the winner earning 100 points as part of the Kentucky Oaks Championship Series. Benner Island was sent off as the 6-5 favorite exiting a second place finish in the Honeybee (G3). In to challenge her included 3-1 second choice Vexatious, third in the Fair Grounds Oaks (G2), and 9-2 third choice Spooky Woods, third in the Santa Ysabel (G3). 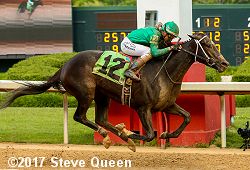 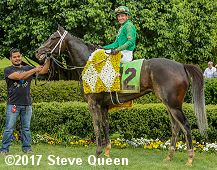 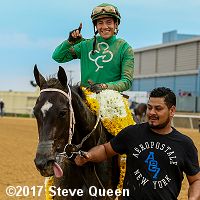 Left: Ever So Clever in the winner's circle. Winning trainer Steve Asmussen said, "The filly broke fine from the 12 hole. He made an immediate decision, got over. She was probably only 6-7 off the lead around the first turn, two-wide and carrying him well. I thought it made the difference in the race. I felt very good about how the filly trained and that he had ridden her before. I felt we had a lot more horse going into today. The filly has a great personality, and we've always felt this way about her. And for her now to win a nice graded stakes is what she deserves. She's going to Churchill Monday (to prepare for the Oaks) and it's fun to have her there."

Right: Winning jockey Luis Contreras celebrates aboard Ever So Clever. Contreras said, "She felt great today. The last time I got an opportunity to ride her, she finished fifth. I learned a lot and Steve gave me some advice about the filly, how she likes to run. we got everything perfect today. From the time we broke, she did everything by herself. i just waited, got patient and kicked in at the quarter pole, and she gave me everything. Once I started making my move, I wasn't worried about anybody in the race. I just went with the momentum and enjoyed the last part of the race." 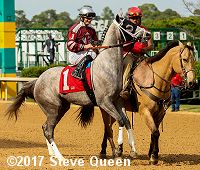 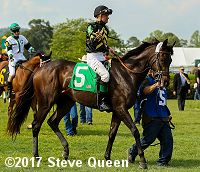 Left: Second place finisher Chanel's Legacy in the post parade. Trainer Lynn Chleborad said, "She tried so hard. I'm so proud of her. It was a nail bitter right down to the wire. I thought Alex did a great job backing them up. I'm proud of the whole team, the horse. It's exciting." Jockey Alex Birzer added, "She had a little more time in between races this go and she just ran a big race. They (did) an excellent job getting her ready for this. Wasn't necessarily planning on going, but you just can't see what happens and nobody else really went. They let me nurse a nice little lead; she ran a big race."

Right: Third place finisher Vexatious in the infield saddling area. Jockey Kent Desormeaux said, "She ran a much improved race, but I had to do a lot of altering of course and I was beaten a lip for 2nd." 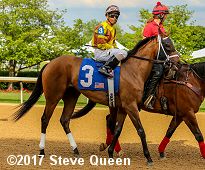