2017 Oaklawn Racing Festival of the South

The co-feature on Arkansas Derby day, the $600,000 Oaklawn Handicap (G2), featured a field of 7 older horses going 1 1/8 miles on the main track. Midnight Storm was sent off as the prohibitive 1-2 favorite, third in the Breeders' Cup Mile (G1) and here off a close second in the Santa Anita Handicap (G1). In to challenge him included 5-2 second choice Madefromlucky, third in the Poseidon Handicap and Essex Handicap and 8-1 third choice Texas Chrome, winner of last year's Super Derby (G2) but unraced since finishing 9th in the Breeders' Cup Dirt Mile (G1).

Jockey Mike Smith sent Midnight Storm to the lead first time by and he set fractions of 22.96, 46.49, and 1:10.60 over the fast main track while pressed by 60-1 Cutacorner and stalked by 19-1 Inside Straight. Turning for home, jockey Geovanni Franco sent Inside Straight between the pacesetters to gain the lead in midstretch through 1 mile in 1:35.88 Kept to task by Franco, Inside Straight drew away to a 2 length victory over late-running 13-1 Domain's Rap in 1:48.40. It was a neck back to favorite and pacesetter Midnight Storm third.

Also check out Classic Empire winning the Arkansas Derby and Stellar Wind winning the Apple Blossom during the Racing Festival of the South at Oaklawn. 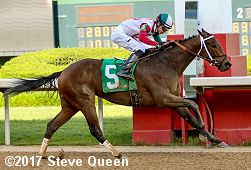 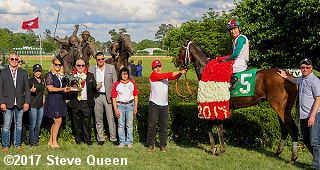 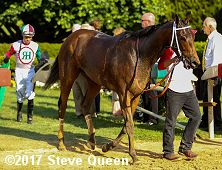 Left: Inside Straight in the winner's circle. Winning trainer Robertino Diodoro said, "I was scared he was going to be the lone speed and we weren't going to have much pace to run at. All we could worry about was our horse. This horse has just been getting better and better, training better, working better. He's a horse that just made the step to the next level, and he proved it today. Can't say enough about the horse."

Right: Inside Straight heads back to the barn after the race. Diodoro added, "Midnight Storm (favorite) is a nice horse. Halfway around the turn I knew we had a tough horse in front of us. (The other jockeys) were down riding and Franco was there with a lot of horse. He is a New York-bred, and the plan is to take him to Belmont. We are going to have a string there this summer. He's had kind of a rough campaign, a tough campaign since we bought him. He's done a lot of traveling. He's not that big a horse, but he's carried good weight. He's just gotten better and better with each race, and today he proved it. Been a good purchase." 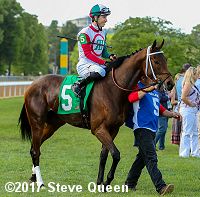 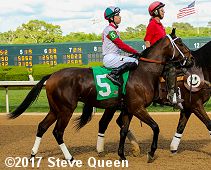 Left: Inside Straight in the infield walking ring. Winning jockey Geovanni Franco said, "First I want to say thanks to the trainer and owner. Thanks to God. I don't know (what to say), it was incredible. My first graded stakes. I am so happy it happened."

Right: Inside Straight in the post parade. Winning owner Randy Howg of Alberta, Canada said, "It's just unbelievable. I don't know how this can be true. It's a long ways from Canada. I've got a lot of friends in Alberta up there watching. This is just incredible to win this. I should be home planting beets. But my son and wife are looking after things at home. I think they probably thought I was on a wild goose chase, but I had a pretty good day. We did win the Oklahoma Derby with another horse, but I had four partners." 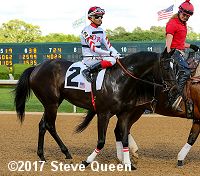 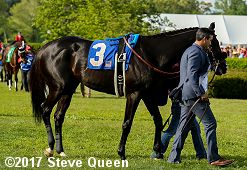 Left: Second place finisher Domain's Rap in the post parade. Jockey Ramon Vazquez said, "I am so happy he ran 2nd today. He always tries, and I am so proud of him because he is so old. He always gives his all in a race." Trainer Federico Villafranco added, "I can't complain. He ran his race. He tried hard. He's all heart."

Right: Third place finisher and beaten favorite Midnight Storm in the infield walking ring. Jockey Mike Smith said, "You know I am kind of at a loss for words to be honest with you, I don't know what to tell you." [Anything you would have done differently?] "Rode the winner! He just didn't fire, I don't know.  Maybe that last race might have taken a little steam out of him or something, I don't know. He felt fine, he was running well, he looked good, training good, but he certainly didn't fire his A race. He ran a C today." Trainer Phil D'Amato added, "We got hooked by the two longest shots on the board. But you know, that's horse racing. (Inside Straight) fired big in the lane and we just got outrun." 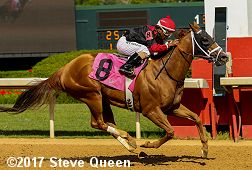 Kicking off the stakes action on Arkansas Derby day was the $200,000 Count Fleet Sprint Handicap (G3). A field of 9 older horses sprinted 6 furlongs around one turn of the historic Hot Springs oval, with Hot Springs Stakes winner Whitmore sent off as the 1-2 favorite over 7-2 Moe Candy, second in the Palos Verdes (G2), and 13-2 Holy Boss, winner of the Duncan F. Kenner Stakes.

Jockey Richard Eramia sent 60-1 longest shot Chief Cicatriz to the lead and he set fractions of 21.26 and 43.91 while pressed by Holy Boss and stalked by 33-1 Black Bear. In the stretch Chief Cicatriz tired as Whitmore, 4th early under Ricardo Santana Jr., swept past the leaders 4 wide to open up a 1 1/2 length lead through 5/8 in 56.11. Kept to task by Santana, Whitmore drew off to win by 1 3/4 lengths over late-running 31-1 Apprehender in 1:08.35. It was a head back to Holy Boss third. 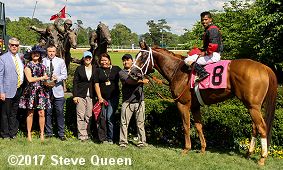 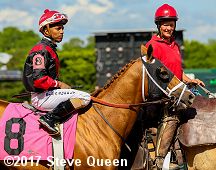 Left: Whitmore in the winner's circle. Winning trainer Ron Moquett said, "I think he's still learning this new game, but he likes it a lot. It's easy on him. Someone asked me earlier, ‘How did you teach him to sprint?' I said, ‘That's not the training feat. The training feat was getting him to be third in the Arkansas Derby and second in the Rebel.' He's always wanted to do this. You always say, ‘Well if he duplicates the last race, then he'll be hard to beat.' And then in the last race he did. I knew there were some decent horses, and he duplicated it again. Today, I was really pleased he did it in this race. I'm in the barn named for Count Fleet; I wanted to win this race." 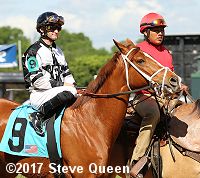 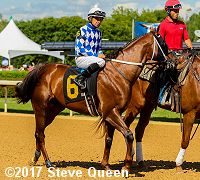 Right: Third place finisher Holy Boss in the post parade. Jockey Mike Smith said, "He ran great, just a neat horse. I mean, I love him. The winner is just really, really good right now. He's at the top of his game. But my horse ran great. I can't complain."