The $1.5 million Belmont Stakes (G1), contested at 1 1/2 miles, one lap of the Belmont Park main track for 3-year-olds, is the third jewel of the Triple Crown, with 57,729 fans coming out to Belmont Park in Elmont, New York on Saturday afternoon despite the lack of a Triple Crown possibility this year. Conditions were excellent most of the day, with partly cloudy skies and temperatures in the low 80's. After Japanese hope and UAE Derby (G2) runner-up Epicharis was scratched by the state veterinarian due to lameness in his right front hoof, a field of 11 three-year-olds went to post for the "Test of a Champion". Wood Memorial (G1) winner Irish War Cry was sent off as the lukewarm 11-4 favorite off his disappointing 10th in the Kentucky Derby (G1). In to challenge him included 5-1 second choice Tapwrit, winner of the Tampa Bay Derby (G2) but 5th in the Blue Grass (G2) and 6th in the Derby, and 6-1 third choice Lookin at Lee, runner-up in the Derby but 4th in the Preakness (G1), the only horse to compete in all three legs of the 2017 Triple Crown. 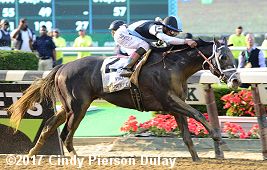 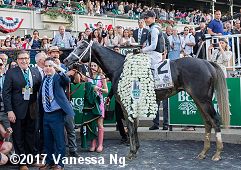 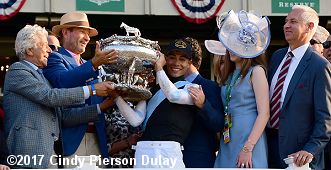 Left: Tapwrit in the winner's circle. Co-owner Aron Wellman said, "We bought this horse to try to win a Classic, and to be able to execute that game plan, an ambitious game plan, we couldn't have drawn it up any better. I think we all had a very clear vision of how this race was going to be run today, and it was just a matter of execution. We thought it would play out kind of like a turf race and we were looking for a little bit of a turf trip today in that we wanted to just draft in right behind the leaders and cover him, where they keep him gathered. He's an interesting horse because he actually prefers to be in the thick of things and have horses surrounding him. He doesn't mind taking dirt. The last two races he was sort of out in no-man's land and didn't seem to appreciate that too much."

Right: The trophy celebration with the happy connections. Winning trainer Todd Pletcher, celebrating his third Belmont win, said "Tapwrit was getting a beautiful trip. It was everything we talked about in the paddock before the race. We were hoping he had enough when it came to crunch time. It looked like Irish War Cry still had a little something left, but the last sixteenth, he dug down deep. It's our home base and I think that's always an advantage. We felt like with the five weeks in between, and with the way this horse had trained, that he had a legitimate chance." 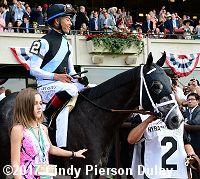 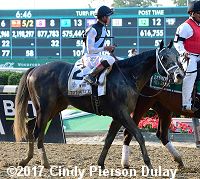 Left: Tapwrit heads out to the track before the race. Winning jockey Jose Ortiz said, "It's an unbelievable feeling that I can't explain. I'm very happy right now. I'm happy for the owners and for Todd for giving me the opportunity. The distance, I was sure he could handle it. It was a great training job by Todd. I always liked him and we always had a lot of faith in him. Today he showed up. I'm very happy."

Right: Tapwrit parades for the fans after the race. Pletcher added, "I think each of these (Triple Crown) races individually stand on their own as major races and huge wins. The Derby win was awesome, and the ebbs and flows of this game are well-documented, and the last five weeks have been the ultimate roller coaster for us. But we felt really good coming in actually that both horses were doing very well, and we felt like both horses suited the 1 1/2 mile distance. They have the right running styles, they have the right disposition, right pedigrees, so we were just fortunate it fell into place. 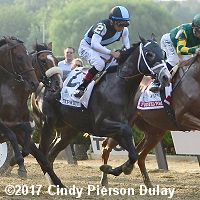 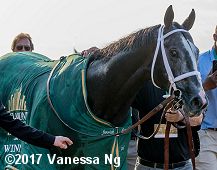 Left: Tapwrit shortly after the start of the race. Pletcher added, "I think he ran a very sneaky good race in the Kentucky Derby, and there's a lot made about the trouble at the start. He got as much of that as anyone. Unfortunately at that post position draw, we also thought, man, we drew perfect, 16 is a great spot, it's been I think over the last decade or 20 years the most successful post position, and it turned out it was the worst position because Irish War Cry took a left leaving there, and then it was just a chain reaction from there."

Right: Tapwrit heads back to the barn. Jonathan Thomas of co-owner Bridlewood Farm said, "I thought he ran great. I was just watching the replay there, and he was still closing at the end. I felt like having another race under his belt in the Derby was very helpful. We talked about how solidly he was bred for the mile and a half, and you've got to love a horse like that that has as much heart and character as he does, and he's deserving of a good finish in the race, and I think he's the kind of horse that will continue to improve. 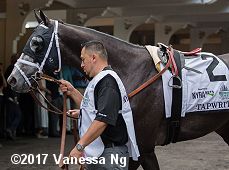 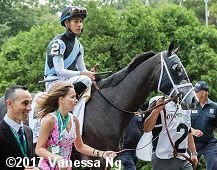 Left: Tapwrit in the paddock. George Isaacs of co-owner Bridlewood Farm said, "He was a very good horse, great management, great trainers, and those are the keys to success. Mr. Malone promised Jonathan and I he'd give us the capital to do our job, that's what he does. He provides good working capital, excellent management for everyone to do their jobs."

Right: Tapwrit exits the paddock. Pletcher added, "It's the nature of this business. You very seldom just get to enjoy a win and not have a target right around the corner, especially with the Derby winner, there's, I think -- you know, the two-week turnaround between the Kentucky Derby and the Preakness is a really short time for horses, but it's a pretty long 14 days for a horse trainer. Yeah, we really were hoping that Always Dreaming could take a shot coming in for a Triple Crown try, but that's every trainer's ultimate dream. But the back of my mind I was thinking, man, if he wins, I'm worried about what we're going to do with Tapwrit. It's all good today." 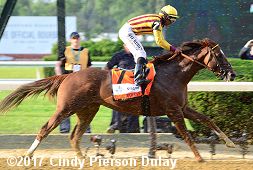 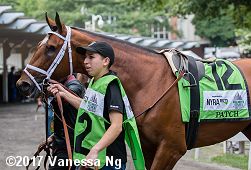 Left: Second place finisher and beaten favorite Irish War Cry just after the finish line. Jockey Rajiv Maragh said, "He tried hard to the end. When I straightened up I had horse left and I knew it was going to take a really big run from another hose to catch me. I was pretty confident turning for home. I saw the other horse coming and obviously a race of this magnitude I'm going to ride hard to the wire, and even when I was ahead you know they're going to be coming at you, but my horse never really gave up. He ran hard to the end he just got a little bit overpowered late in the race, but I'm proud of his effort." Trainer Graham Motion added, "We were hoping we might get a little bit of a stalking trip but we had to go to Plan B and Rajiv did a great job. He went 3/4 in 1:14. Turning for home, I thought we might have it but it's a long way home."

Right: Third place finisher Patch in the paddock before the race. Jockey John Velazquez said, "He ran a very good race. It was a good trip. The whole race, that's where we broke and where we were, I thought he ran a god race. He finished up really well. He can run with a good kick."

The horses break from the gate for the Belmont Stakes. Victor Espinoza aboard fourth place finisher Gormley (post 3) said, "I think he ran a great race. He missed the break. He stumbled a little bit because he was moving around and the other two horses next to him squeezed me just a little, but he's quick, so I thought I could get out of that mess and sit just off the speed. I had an excellent trip, but down the lane he was still just a little immature. He really didn't help me to go forward. I have to believe that blinkers would help him. As he gets older, I believe that he's going to improve."