The major New York prep race for the Triple Crown is the $750,000 NYRA Bets Wood Memorial Stakes (G1), contested at 1 1/8 miles, one complete circuit of the Aqueduct main track, 100 points to the winner as part of the Kentucky Derby Championship Series. Conditions were excellent at the Long Island oval near Kennedy Airport, with partly cloudy skies and temperatures in the high 50's. Battalion Runner was sent off as the 2-1 favorite in the field of 8 off consecutive wins in allowance company. In to challenge him uncluded 5-2 second choice Cloud Computing, second in the Gotham Stakes (G3) last out, and 7-2 third choice Irish War Cry, winner of the Holy Bull (G3) but 7th in the Fountain of Youth (G2).

Jockey John Velazquez sent Battalion Runner to the lead first time by and he set fractions of 23.50, 47.34, and 1:11.83 over the fast main track while pressed by 21-1 True Timber and stalked by Irish War Cry. Entering the stretch, Battalion Runner continued to lead through 1 mile in 1:37.67, but Irish War Cry, under confident handling by Rajiv Maragh, easily ran by him inside the 1/8 pole to win going away by 3 1/2 lengths in 1:50.91. It was another 3 1/2 lengths back to Cloud Computing third. 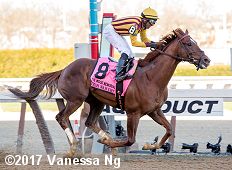 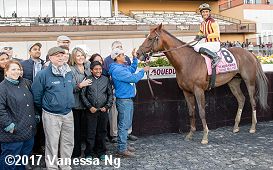 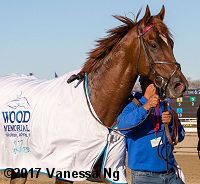 Left: Irish War Cry in the winner's circle. Winning trainer Graham Motion said, "I think it's so good that Rajiv came to the barn and has been on him the last few mornings to see how he is. He's not a difficult horse. He's not a rank horse; he's a very classy horse. We both thought it was a good idea for Rajiv to get on him in the mornings. I thought he won pretty comfortably and it doesn't seem like the distance of the Derby will be an issue." Irish War Cry looks to become just the third New Jersey bred to win the Derby, after filly Regret (1915) and Cavalcade (1934).

Right: Irish War Cry heads back to the barn after the race. Winning jockey Rajiv Maragh said, "He was sharp into the first turn. There was a little pace in front of him, which is what we were hoping for to get in a good tracking positon. He was always in a smooth rhythm. He relaxed real easily. He did everything I wanted him to do without a lot of effort. He did it all in rhythm. He wasn't rank at all. He settled beautifully. By getting on him in the mornings, I didn't think I'd have a hard time getting him to settle because he goes so easy and comfortable. We ran good together today." 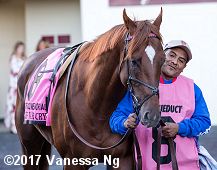 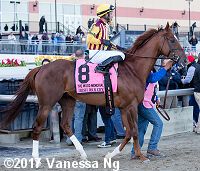 Left: Irish War Cry in the paddock before the race. Hope Jones, niece of owner-breeder Isabelle de Tomaso, said, "We are unbelievably thrilled. This is the first time I've seen this horse race in person and Irish War Cry did not disappoint at all. We are so excited. I live in Queens and this is my first time at Aqueduct and the horse wins the Wood. It's amazingly exciting. I always went to Monmouth Park." Mrs. de Tomaso is the daughter of the late Amory L. Haskell, founder of Monmouth Park.

Right: Irish War Cry heads out for the post parade. Maragh added, "When I was down and out, these are the days I dreamed about. These are the days that made me feel I wanted to ride. You never know if you'll get them again after being off so long. I can't be more thankful for everyone who has been there for my recovery and supporting me now that I'm back. I've never been so emotional after a race in my life as I was after this." 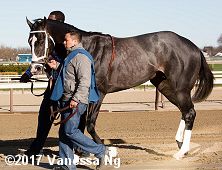 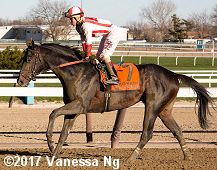 Left: Second place finisher and beaten favorite Battalion Runner walks over to the paddock before the race. Byron Hughes, assistant to trainer Todd Pletcher said, "Going from allowance to a Grade 2, two turns, shipping all the way up to New York, I thought he ran a good race. He was on the front end doing all the heavy lifting. I thought he dug in and according to Johnny [Velazquez], he just got a little green there. It was a big effort for his fourth start overall and first start in a graded stakes. It was his first start at 1 1/8, so it's not disappointing. We were going to let Johnny break and go to the first turn. They broke well and let him do his thing. I thought he looked comfortable on the backside. He just came up short.

Right: Third place finisher Cloud Computing returns after the race. Jockey Irad Ortiz Jr. said, "I got a very good trip, can't complain about it. He missed the break a little bit but he got in a good position on the backside following the winner. I was waiting, waiting, waiting, they just got away from me. I got beat by two very good horses." 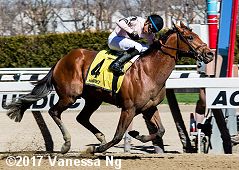 Kicking off the stakes quintet on Saturday, the $250,000 Bay Shore Stakes (G3) featured a field of six 3-year-olds sprinting 7 furlongs on the main track. Last year's Futurity (G3) winner Thoery was sent off as the 11-10 favorite, unraced since finishing 10th in the Breeders' Cup Juvenile (G1), over 7-5 debut winner Long Haul Bay and 8-1 You're to Blame, 5th in the Remsen (G2) before winning an allowance at Parx in February. 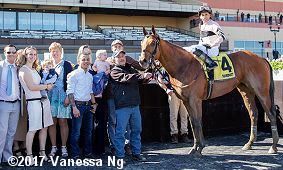 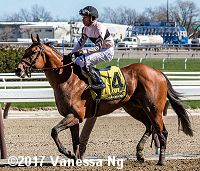 Left: Long Haul Bay in the winner's circle. Whit Beckman, assistant to winning trainer Chad Brown said, "Mid-stretch, it looked pretty good. I was pretty confident how he was going to finish. Both [Long Haul Bay and Cloud Computing] were originally in Florida and Chad sent them up knowing they'd be good horses for New York. Once we got them up, these two separated themselves early as top-quality type horses. It's just been maintaining them. We know the talent is there and they've done the rest themselves. New York, you know, is a great place to keep (dirt) horses for the winter."

Right: Long Haul Bay returns after the race. Winning jockey Manuel Franco said, "He's improved so much; I like him a lot. When I rode him the first time, I knew he could run. He showed that today. He broke sharp but when I saw there were three horses going, I decided to take him back and wait a little. When I saw the chance to make a move, I made it. 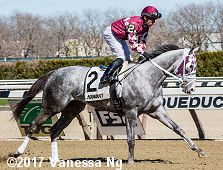 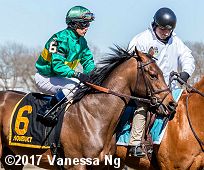 Left: Second place finisher Even Thunder warms up before the race. The John Servis trainee improved his record to 3 wins, 3 seconds, and 0 thirds in 8 starts, earning $202,740 for owner Leonard Green.

Right: Third place finisher You're to Blame in the post parade. The Chad Brown trainee improved his record to 2 wins, 1 second, and 1 third in 6 starts, earning $126,700 for owner Woodford Racing LLC. 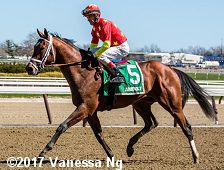 Fourth place finisher and beaten favorite Theory returns after the race. Jockey John Velazquez said, "He didn't break very good. Then we got a good positon, but that was it. He didn't run at all."