There were 5 graded stakes races run over the Aqueduct main track on Saturday. The second Grade 1 event on Wood Memorial day was the $400,000 Carter Handicap (G1) for older horses sprinting 7 furlongs and an early prep for the Breeders' Cup Sprint (G1). Unified was the 9-10 favorite in the field of 9 off his win in the Gulfstream Park Sprint (G3). In to challenge him included 11-4 second choice Tommy Macho, third in the Gulfstream Park Handicap (G2), and 7-1 third choice Ocean Knight, fourth in the General George (G3).

Jockey Chris De Carlo sent 54-1 longest shot Green Gratto to the lead exiting the chute and he set fractions of 22.56 and 45.64 over the fast main track while as many as 2 lengths in front of Unified stalking in second, in turn a length more to Ocean Knight settling in third. On the turn Green Gratto continued to lead through 3/4 in 1:10.27. Unified attempted to close late under Javier Castellano but Green Gratto was up to the challenge, holding off the favorite by a neck for the upset in 1:23.25. It was another 1 1/4 lengths back to Tommy Macho third. 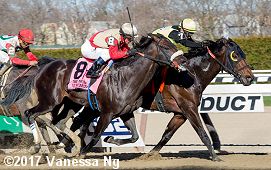 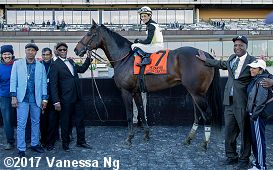 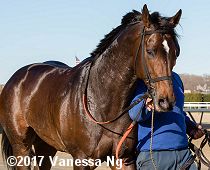 Left: Green Gratto in the winner's circle. Winning co-owner and trainer Gaston Grant, celebrating his first Grade 1 win said, "The last time, he actually bled and he didn't perform any. When we went back to the barn, we scoped him and knew something was wrong. It wasn't like his physical ability wasn't there. We went to the drawing board and came back and he was working like a freight train. There's not much we can do with him now other than these races, so we might as well take a shot at the big guys. I guess that's every trainer's dream (to win a G1). I knew he had it in him, but he had to put it together in the afternoon. We finally put it together this afternoon."

Right: Green Gratto heads back to the barn after the race. 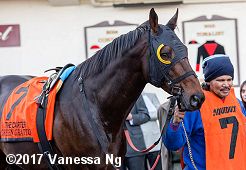 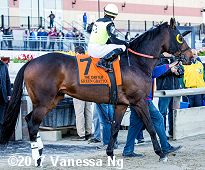 Left: Green Gratto in the paddock before the race.

Right: Green Gratto heads out for the post parade. Winning jockey Chris DeCarlo said, "He broke running and I was able to let him get into a good rhythm. I thought that they would move at me a little earlier, like midway around the turn, but when nobody was right on him, I was able to give him a breather and let him save himself. When we turned in, I still had a lot of horse and he kept on running. He tries. He keeps the same steady pace. He's a big horse and he's got a real long stride." 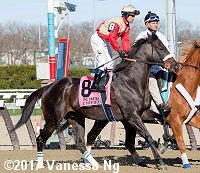 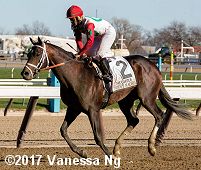 Left: Second place finisher and beaten favorite Unified in the post parade. Trainer Jimmy Jerkens said, "He got beat by one of my favorite horses [Green Gratto], who almost won this race two years ago. I always loved that horse. He's not a horse who gives up when you go to him. We probably should have tried to latch onto him a little earlier,  but you can't take anything away from the winner. He's been a good old horse for a long time. It's no disgrace to be second to him, even though he was 54-1." 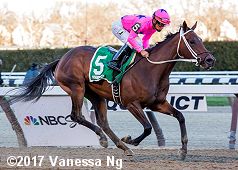 The filly counterpart to the Wood is the $300,000 Gazelle Stakes (G2) for 3-year-old fillies, also contested at 1 1/8 miles, worth 100 points to the winner as part of the Kentucky Oaks Championship Series. Miss Sky Warrior was the 8-5 favorite in the field of 9, winner of 4 straight including the Tempted (G3), Demoiselle (G2), and Davona Dale (G3). In to challenge her included 2-1 North End, a maiden winner at second asking last out, and 5-1 Yorkiepoo Princess, winner of the Furlough, Ruthless, and Busher Stakes, the local prep series for this event. 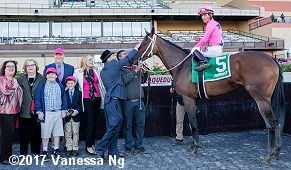 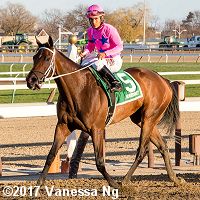 Left: Miss Sky Warrior in the winner's circle. Winning trainer Kelly Breen said, "This the sharpest I've ever seen her going into a race. It had me a little nervous actually. When she was walking over here she was striking at the groom, she was trying to buck a little bit in the post parade, so it was a good energy that she had. The rest of the race to me, you just say 'wow.' It was really a powerful performance. I try not to get in Paco's head too much. I told him if somebody else goes, you can let her go. She's rated kindly before and she broke super sharp. He even said that when he came off that she broke really sharp. He said 'I had to go.' She relaxed for him and really put up a powerful performance."

Right: Miss Sky Warrior returns after the race. Winning jockey Paco Lopez said, "I think I had the best filly in the race today. She broke very well. I didn't want to make the lead but the filly pulled me and I let her go - perfect trip. She's a very nice filly. It's up to the owner and the trainer, but I hope we can go to the Kentucky Oaks. I was very impressed today." 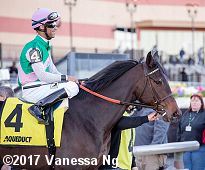 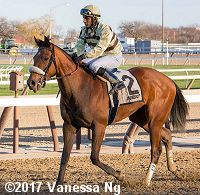 Left: Second place finisher Lockdown heads out for the post parade. Jockey Kendrick Carmouche said, "We were second-best today chasing a road runner. She did everything she had to do to try and win the race. We got second, so I'm happy for the owner and Mr. Bill [Mott, trainer]. She ran her race. She ran good, I'm very proud of her. You can't ask for too much more." 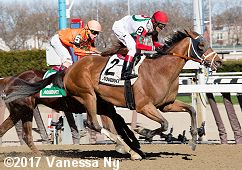 The longest race on Wood day was the $150,000 Excelsior Stakes (G3) for older horses going 1 1/4 miles on the main track. Alex M. Robb and Haynesfield Stakes winner Send It In was sent off as the even-money favorite in the field of 7 off his third place finish in the Stymie. In to challenge him included 3-1 Doyouknowsomething, second in the Stymie, and 6-1 Bellamy Way, an allowance winner last out. 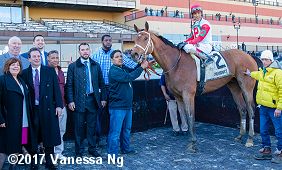 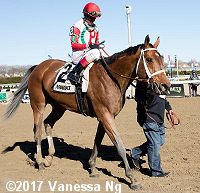 Left: Send It In heads to the winner's circle. Winning owner-breeder Paul Pompa Jr. said, "He's a beautiful homebred. He wanted it today and he's a grinder. It's very nice to have a New York-bred who is now a Grade 3 winner. He's by the horse I had who won the Kentucky Derby, Big Brown. I used some of my breeding rights to Big Brown and I got this horse. I bought Sharp Instinct [the dam] a yearling filly, so it's really very nice to win with this horse. This is the second time he's chased down the loose speed and he just wants to win. One day it's going to be a little easier for him because somebody's going to go with the loose speed. That's what we were hoping for today, but everybody took back."

Right: Send It In returns after the race. Winning jockey John Velazquez said, "We broke well, better than last time and we got a nice position going into that first turn. Down the backstretch, I got the position that I wanted. I didn't want to leave that horse too far in front and give my horse too much to make up, so I got busy on him at the 3/8 pole. Once he got into the lane he had a nice kick. That kick was very good. It was just what I needed then." 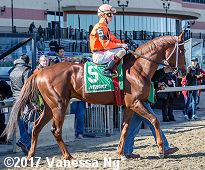 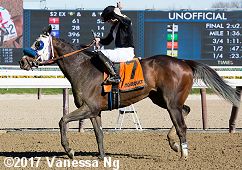 Left: Second place finisher Tu Brutus heads out for the post parade. Jockey Irad Ortiz Jr. said, "It was the horse's first time in the country and [Gary] Contessa did a good job with him. He brought him ready. The horse ran a hard race. He broke a little aggressive out of there so I just tried to relax him. He went a little fast the first part. I tried to hold him on the backside and he came back to me. Then he gave me something at the end, barely got beat."