The Belmont Stakes Racing Festival runs from Thursday to Saturday, highlighted by the 149th Belmont Stakes run on Saturday, the third leg of the Triple Crown series. Conditions were excellent for the 3 stakes races on Thursday afternoon, with cloudy skies and temperatures in the mid 60's. 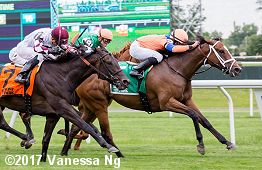 The highlight on Thursday was the $250,000 Intercontinental Stakes (G3) for older fillies and mares sprinting 7 furlongs on the turf. Take These Chains, undefeated in 3 starts, was sent off as the 7-10 favorite in the field of 10 over 6-1 Portmagee, winner of the License Fee Stakes, and 13-2 Mississippi Delta, 4th in the Distaff Turf Mile (G2). Portmagee was quickest away through fractions of 22.80, 45.38, and 1:08.22 while pressed by 7-1 Fair Point and stalked by 107-1 longest shot Perfect Pic. Portmagee opened up a 1 1/2 length lead midstretch but Mississippi Delta, 6th early under Jose Lezcano, rallied well and outfinished 9-1 Conquest Babayaga by a head in 1:20.05 over the firm course. It was 3/4 length back to Portmagee third while Take These Chains finished 7th. 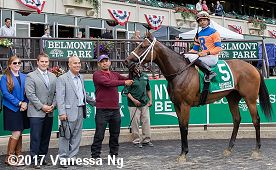 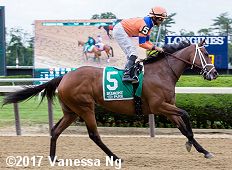 Left: Mississippi Delta in the winner's circle. Winning trainer Mark Casse said, "That was interesting, because the filly that was flying on in (Conquest Babayaga) was my old filly that we sold in the Conquest dispersal. I felt like I was afraid the Preakness was going happen. Chad got us in the Preakness; we got him this time. When she's on her game, she's on the bridle. I said to (son and assistant) Norman about the 1/4 pole, 'He's got horse. She's going to run good.' She looked good today."

Right: Mississippi Delta in the post parade. Winning jockey Jose Lezcano said, "I got a very good trip. She broke good and we were exactly where I wanted to be. Last time, she got very soft turf. I know she's a nice filly and she's better than what she showed last time. Today, the grass was perfect for her and she ran her race." 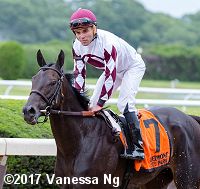 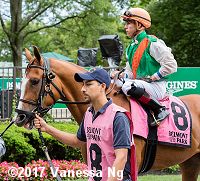 Right: Third place finisher Portmagee in the paddock before the race. The Christophe Clement trainee improved her record to 3 wins, 0 seconds, and 3 thirds in 6 starts, earning $201,500 for owner Waterville Lake Stable. 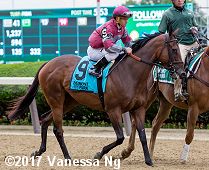 Seventh place finisher and beaten favorite Take These Chains in the post parade. Jockey Javier Castellano said, "I didn't have much excuse today. I was in a good spot but, unfortunately, she didn't fire today. I don't know for what reason, but she didn't show up today." 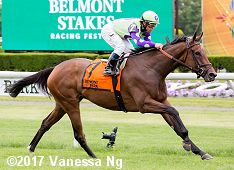 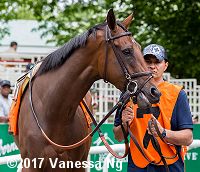 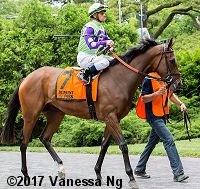 Left: New Money Honey in the paddock after the race. Winning trainer Chad Brown said, "There wasn't much speed and, out of our three horses, she was the fastest. So we figured we'd send one out there and let everyone go along. Since she was the fastest of the three horses, we sent her out to the lead and we're happy with how she handled it. She ran very well."

Right: New Money Honey heads out of the paddock. Winning jockey Javier Castellano said, "Heading into the race and looking at the field, I didn't see too many horses that could keep up with her. My plan was to just dictate the pace and go to the lead. She was much the best. I give all the credit to Mr. Brown. The way he's been training that filly, I just enjoyed the ride." 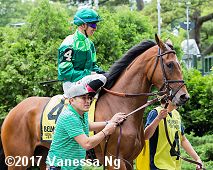 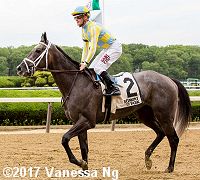 Left: Second place finisher Fifty Five heads out of the paddock before the race. Trainer Chad Brown said, "I thought Fifty Five ran a much better race this time. She got a better trip today. She was more forwardly placed today because of there wasn't enough speed. I was very encouraged with how she ran, and it looks like she'll improve with longer distances as well. I wanted all three of them to adapt to the pace and be there as far as they can. And they all were closer than they normally are." 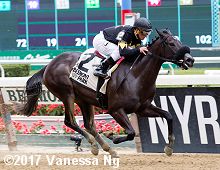 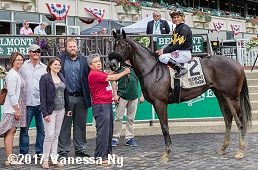 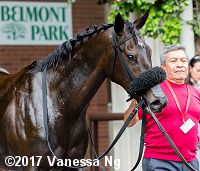 Left: I Still Miss You in the winner's circle.  Winning trainer Jeremiah Englehart said, "Coming out of that (maiden) race she's done everything right. She didn't lose any weight, her blood work remained good and we thought she would give a similar effort her if she was fast enough and she proved that today. I thought Javier did a great job with her. I've had two great rides from her on Irad (Ortiz, Jr.) the first time and Javier now and you're pretty lucky when you're in that company."

Right: I Still Miss You heads back to the barn after the race. Winning jockey Javier Castellano said, "It was a big field and with the inside post, I had to use her speed and she responded. We didn't have a chance to rate; we had to send her because of the position she had. From the outside post, we can ask her to relax a little bit and don't push her too much, I think you'll be able to stretch her out. I think she's a straightforward filly, it's the first time I rode her. She'll move forward well." 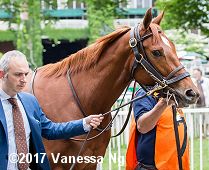 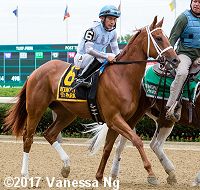 Left: Second place finisher Best Performance in the paddock before the race. The Christophe Clement trainee improved her record to 1 wins and 1 second in 2 starts, earning $80,000 for owners West Point Thoroughbreds and Tango Uniform Racing LLC. 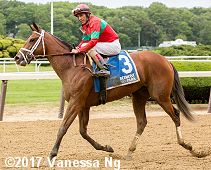 Fourth place finisher and beaten favorite Sugar Queen returns after the race. The Todd Pletcher trainee has a record of 1 win, 0 seconds, and 0 thirds in 2 starts, earning $57,500 for owner Sumaya U.S. Stable.

Back to Horse-Races.Net main page <9>