The $1 million Louisiana Derby (G2) is the highlight of the Fair Grounds meeting, and is the major local Kentucky Derby prep race and is worth 100 points to the winner in the Road to the Kentucky Derby. A full field of 14 three-year-olds went to post in the 100th renewal of this 1 1/8 mile test on Saturday afternoon, under cloudy skies and temperatures in the high 70's. Withers (G3) winner Revolutionary was sent off as the lukewarm 5-2 favorite over 7-2 Palace Malice, third in the Risen Star (G2) last out, and 9-2 Departing, undefeated in three starts including the Texas Heritage at Sam Houson. 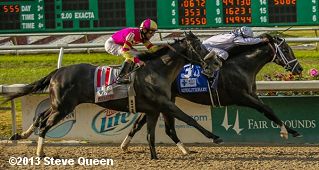 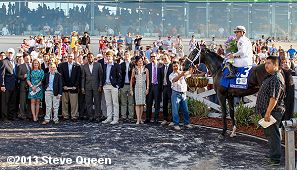 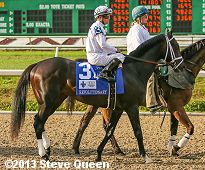 Left: Revolutionary in the winner's circle. Elliott Walden of winning owner WinStar Farm said, "I think he's got all the experience he needs and it's nice he got the points so we are on to Kentucky. I saw him in the paddock. He doesn't turn a hair. He goes around there like a puppy dog. When you get to Louisville, those kinds of things matter."

Right: Revolutionary in the post parade. Winning jockey Javier Castellano said, "It was a really beautiful trip. That's the kind of horse we would like to take to the Kentucky Derby. He can do everything. He passed the test today and last time (Withers Stakes) and way before. He is a lovely horse to ride and a come-from-behind horse – very much a true horse. He did everything the right way today. I really like him. I am looking forward big time." 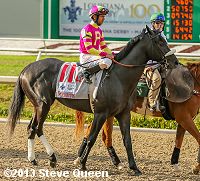 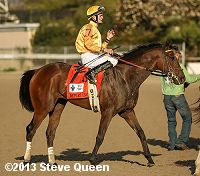 Left: Second place finisher Mylute in the post parade. Trainer Tom Amoss said, "I'm really proud of him. I am proud of the way he ran today. One of these years, the Louisiana Derby is going to have our name on it."


The distaff counterpart to the Louisiana Derby is the $500,000 Fair Grounds Oaks (G2) for 3-year-old fillies, and worth 100 points in the Road to the Kentucky Oaks. A field of 7 contested this 1 1/16 mile trip on the main track, with the undefeated Unlimited Budget sent off as the 9-10 choice off wins in the Demoiselle (G2) and Rachel Alexandra (G3). In to challenge her included 8-5 second choice Flashy Gray, second in the Honeybee (G3) last out, and 6-1 So Many Ways, third in the Primal Force last out. 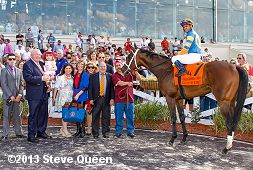 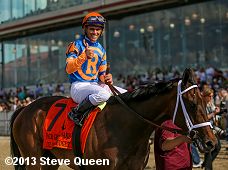 Left: Unlimited Budget in the winner's circle. Winning trainer Todd Pletcher said, "I thought it went more or less like we thought. I thought she ran really well. I thought both her races at Fair Grounds were very impressive. She's a very good filly in her own right (when compared to stablemate Dreaming of Julia). She's 4 for 4. It's hard to knock anything she's done." 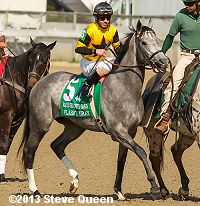 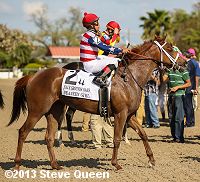 Left: Second place finisher Flashy Gray in the post parade. The 8-5 second choice pressed the pace in second under jockey Junior Alvarado but could not gain on the winner. The Bill Mott trainee improved her record to 2 wins and 3 seconds in 5 starts, earning $196,100 for owners West Point Thoroughbreds and Tom Keithley.

Right: Third place finisher Seaneen Girl returns after the race. the 25-1 shot was 6th early under jockey Martin Garcia then rallied to get third beaten 4 lengths. The Bernard Flint trainee improved her record to 2 wins, 1 second, and 2 thirds in 7 starts, earning $220,197 for owner Naveed Chowhan. 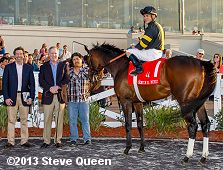 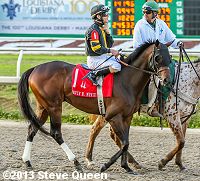 Left: Amira's Prince in the winner's circle. Winning owner Adam Wachtel said, "With his tactical speed we thought we'd be alright cutting back and obviously he can handle it so we are very pleased."

Right: Amira's Prince in the post parade. Winning jockey Junior Alvarado said, "We were trying to figure out what to do because his first time running a little bit shorter than before. He just broke good and I mean he did everything pretty much easy. You know, I didn't want to fight with him at all so I just let him do his own thing. When it was time to run, I asked him and he gave me everything he had." 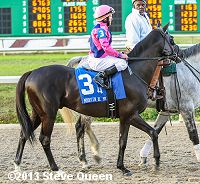 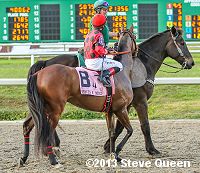 Left: Second place finisher Willcox Inn in the post parade. trainer Mike Stidham said, "That's the real Willcox Inn. Wery nice. We don't have definite plans for him; possibly Keeneland or Arlington Park." Jockey James Graham added, "We saved ground and came home in 11 seconds flat. How many horses can do that?"

Right: Third place finisher String King in the post parade. The 27-1 shot contested the pace under jockey Richard Eramia, but tired late to finish third beaten 3 1/2 lengths. He improved his record to 8 wins, 4 seconds, and 3 thirds in 21 starts, earning $389,052 for owner, trainer, and breeder Charles Smith.


The $400,000 New Orleans Handicap (G2) featured a field of 8 older horses going 1 1/8 miles on the main track. Donn Handicap (G1) winner Graydar was sent off as the 6-5 favorite over 3-1 second choice Bourbon Courage, second in the Donn last out, and 4-1 third choice Flat Out, 4th in the Donn after finishing third in the Breeders' Cup Classic (G1). 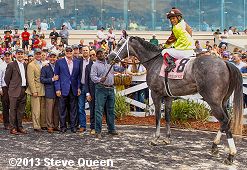 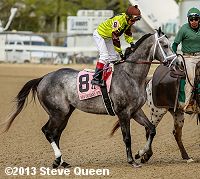 Left: Graydar in the winner's circle. Winning co-owner Steve Davidson said, "We did expect a big effort out of him. It was kind of Plan B. We thought we would be on the lead but coming off of the pace and getting the wide trip. I was real proud the way he dug in there and battled against a really good field, we thought." Co-owner Terry Bradshaw added, "You know what, it's so much fun to see these animals run. It's like that is the reward itself."

Right: Graydar in the post parade. Winning jockey Edgar Prado said, "I saw a couple of horses try to go to the lead so I let my horse do his own thing. He was very happy laying third. He showed a different dimension today. Today was the first time another horse really looked him in the eye and he fought real hard. He showed the will to win and I think only nice horses have that." 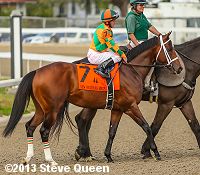 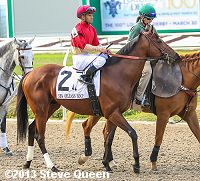 Left: Second place finisher Mark Valeski in the post parade. Trainer Larry Jones said, "He tries," said Jones. "It might be his spot at Fair Grounds. It always seems like there is always one that can get to him. That horse that beat him is a nice horse. He just won the best prep that had been run in America this year and this one might've been better than that. This was a big effort. We wanted to win but it wasn't for lack of try on our horse's part."

Right: Third place finisher Bourbon Courage in the post parade. Trainer Kellyn Gorder said, "We were worried of that with the inside post. He still ran well and we'll live to run another day."

Winning jockey C.J. McMahon said, "He left there good and Mr. Leo told me not to go up there with them and take him back and try to save as much ground as I could and that's what I did." Owner-trainer Leo Gabriel Jr. added, "Johnny showed up today and we're happy for it. That's our first Derby, albeit the Crescent City Derby. We good."

Winning trainer Brett Brinkman said, "I put the blinkers on for a reason other than today. There was probably a little more pace but, you know, Shaun rode the filly excellent. He's pretty much push button." Jockey Shaun Bridgmohan added, "She's a classy filly. My job was easy. I was just trying to be a good pilot and keep her out of trouble like Bret says."

Winning jockey Shaun Bridgmohan said, "Once he got himself into the game today, I was not concerned at all." Trainer and co-owner Eddie Johnston added, "He kept him fairly close. I didn't know if he'd have his kick, but he did. He beat some nice horses today."