The $600,000 Louisiana Derby (G2) is the biggest race of the Fair Grounds season, and is the last major Triple Crown prep in Louisiana. A field of nine 3-year-olds went to the gate in this 1 1/16 mile main track feature, with Pyro sent off as the 4-5 favorite coming off a 3-length win in the Risen Star, the local prep for this event. In to challenge the Steve Asmussen trainee was 9-2 second choice J Be K, undefeated in two career starts, and 5-1 third choice Tale of Ekati, making his first start as a 3-year-old since finishing fourth in the Breeders' Cup Juvenile to War Pass.

60-1 outsider My Pal Charlie went to the rail to save ground and set the pace most of the way around, getting the quarter in 24.10 and the half in 48.07 over the fast track while J Be K sat just a length behind in second. 11-1 Blackberry Road and favorite Pyro sat in stalking third and fourth respectively. Entering the stretch, J Be K moved up to challenge the pacesetter but My Pal Charlie stubbornly held onto the lead, getting the 3/4 in 1:13.86. However, Pyro, who had to wait for an opening between horses at the top of the stretch, split the leaders at the 3/16 pole with a burst of speed, powering through to win going away by 3 lengths over My Pal Charlie in 1:44.44. It was just 1/2 a length back to 12-1 Yankee Bravo third, while J Be K faded badly late to finish 8th. 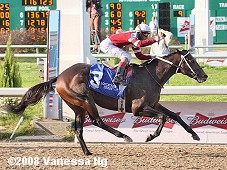 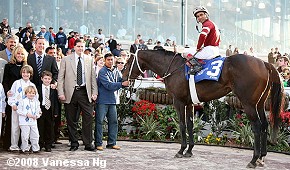 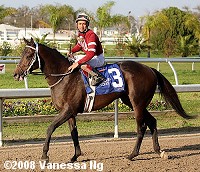 Left: Pyro in the winner's circle with trainer Steve Asmussen on the far left. Asmussen said, "The last time (Risen Star) we were very cautious. Today, these were some very good horses. We prepared well. It looks like he's right on target."

Right: Pyro returns after the race. His jockey Shaun Bridgmohan said, "I was not panicking with my position at all. I knew what I had, and he gave it to me. A spot opened for him on the straightaway for home and he went about his business." 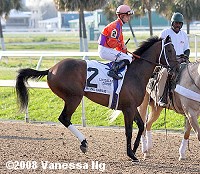 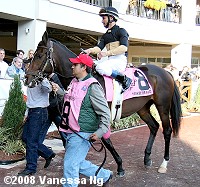 Left: Second place finisher My Pal Charlie acts up in the post parade. His jockey Julien Leparoux said, "We were a long shot on the board and we finished second. If he relaxes a little more, I think he can go farther. But today, but we got beat by a monster."

Right: Third place finisher Yankee Bravo in the paddock. His jockey Alex Solis said, "He did not break well. I wanted to be fourth or fifth. I had to be a little more patient than I wanted to. I think that hurt him, but I settled on the backside. For his first run on dirt, I was very pleased."

The filly counterpart to the Louisiana Derby is the $400,000 Fair Grounds Oaks (G2), also run at 1 1/16 miles. However, just four entered, with undefeated champion Indian Blessing sent off as the heavy 3-10 favorite coming off a win in the Silverbulletday. The filly she defeated in that prep and in the Breeders' Cup Juvenile Fillies, Proud Spell, was back again as the 2-1 second choice.

As expected, Indian Blessing went to the lead immediately and Proud Spell stalked her in second, as the champion clicked off fractions of 24.53, 48.17, and 1:12.80. The two other fillies in the file,d 15-1 Acacia and 18-1 Wisconsin Lady, contested their own "race" as many as 12 lengths back of the leader. Indian Blessing continued to lead to the 1/8 pole, but jockey Gabriel Saez eased Proud Spell out for the drive, allowing the daughter of Proud Citizen to eat into Indian Blessing's lead. Proud Spell found another gear and powered ahead at the 1/16 pole to win going away by 2 1/4 lengths in 1:44.01. It was a long 11 1/2 lengths back from Indian Blessing to Acacia, and another 9 1/4 to Wisconsin Lady last. 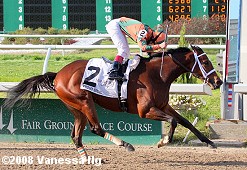 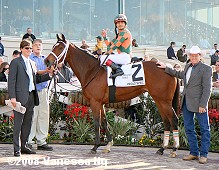 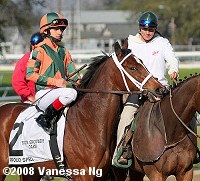 Left: Proud Spell in the post parade. Her jockey Gabriel Saez said, "The last time was the first time she had run in four months, and it was (six weeks) before she ran in the Breeders' Cup."

Right: Proud Spell in the winner's circle with trainer Larry Jones on the right. Jones said, "I'm tickled to death. We just had to stay the course. Gabriel had her in the perfect spot." Jones said Proud Spell may go next in the Ashland at Keeneland. 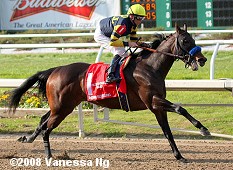 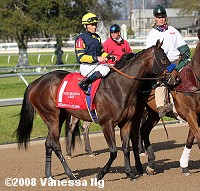 Left: Second place finisher and beaten favorite Indian Blessing early in the race under a tight hold. Her jockey Garrett Gomez said, "I had a perfect trip. I was actually happy having (Proud Spell) chasing me. She finished really well. She just got beat. Even champions get beat."

Right: Indian Blessing in the post parade. On Sunday, trainer Bob Baffert indicated she may skip the Kentucky Oaks. He said, "We learned something in the Fair Grounds Oaks. Garrett tried to get her to slow down, but she was fighting him. We realized that you've got to just let her go or she's not going to give you that extra kick. We learned that. She's just fast. Her weapon is to run 'em off their feet and just separate herself and let them come get her. I think I might just freshen her up. I don’t know about the Kentucky Oaks. I might not run her."