The undercard of the Louisiana Derby features some of the richest races of the Fair Grounds meet. The most important race of the day for older horses is the $500,000 New Orleans Handicap (G2), featuring a field of 6 going 1 1/8 miles on the main track. Neil Howard trainee Grasshopper was sent off as the 9-10 favorite, exiting a victory in the Mineshaft, the major local prep for this race. In to challenge him were 3-1 second choice Brass Hat, exiting a fourth place effort in the Donn Handicap, and 5-1 third choice Magna Graduate, third in the Mineshaft behind Grasshopper.


At the start, 8-1 Silver Lord ducked in, dumping rider Corey Lanerie. Favorite Grasshopper went to the front and battled on the pace with Magna Graduate first time past the stands and around the clubhouse turn through a quarter in 24.13 and a half in 48.19. Down the backstretch, Magna Graduate took over the lead after 6 furlongs on 1:12.27,with Grasshopper staying with him. Entering the stretch, Magna Graduate tired and dropped from contention, but 6-1 Circular Quay, who stalked the pace in third the whole way, came out wide to challenge for the lead. Grasshopper and Circular Quay battled for the last furlong, but in the final strides Circular Quay inched ahead by a neck to get the win in 1:49.80 over the fast main track. It was a long 4 1/4 lengths back to 18-1 longest shot Reporting for Duty in third.

Circular Quay is the fourth horse in Fair Grounds history to win the Louisiana Derby and New Orleans Handicap in consecutive years, the previous one was Peace Rules in 2003-04. 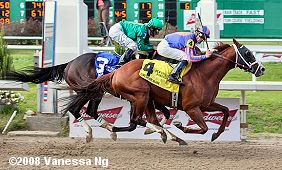 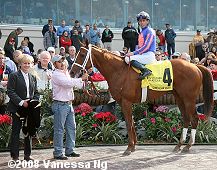 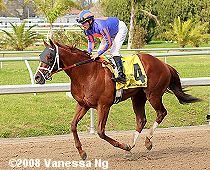 Left: Circular Quay in the winner's circle. His trainer Todd Pletcher said, "We're pleased that the blinkers seemed to have him more in the game early. It looked like he was on the bridle and traveling well. We knew we had a tough battle when we engaged Grasshopper at the top of the stretch. We'll see how he bounces out of it. The Oaklawn Handicap is a possibility."

Right: Circular Quay returns after the race. His jockey Garrett Gomez said, "I was very surprised to be that close. Between the 5/8 pole and the 1/2-mile pole, he was taking me into a spot that I had to decide whether to let him go or sit awhile. He kicked on a little, so I decided to let him go." 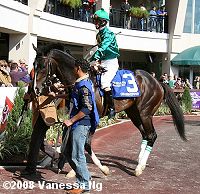 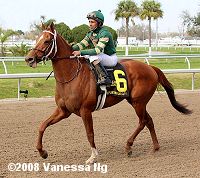 Left: Second place finisher Grasshopper in the paddock. His jockey Robby Albarado said, "I think it hurt a little that the speed of the race (Silver Lord) came out at the start. The pace was honest. We made a little bit of a comeback after (Circular Quay) passed me. It just wasn't his day."

Right: Third place finisher Reporting for Duty returns after the race. The 18-1 longest shot on the board raced back in fifth early, then moved up to third on the far turn while passing the tiring Brass Hat and Magna Graduate. The Steve Asmussen trainee improved his record to 3 wins, 5 seconds, and 2 thirds in 15 starts, earning $416,846 for owners Cathy and Bob Zollars.


The $500,000 Mervin Muniz Jr. Memorial Handicap (G2) featured a field of 10 older horses going about 1 1/8 miles on the turf course. Daytona, winner of his last four starts, all graded, including the Fair Grounds Handicap last out, was sent off as the 2-1 favorite. In to challenge the Dan Hendricks trainee were 4-1 second choice Proudinsky, second in the San Gabriel at Santa Anita in his last start, and 9-2 Fracas, making his first start for new trainer Barclay Tagg since coming over from Ireland where he was second in the Diamond Stakes at Fairyhouse in September.

New rider Alex Solis sent favorite Daytona to the front right away and he was allowed an uncontested lead of as many as 1 1/2 lengths, setting easy fractions of 24.06, 49.00, 1:13.03, and 1:38.11 over the yielding course. Proudinsky stalked him in second, with 11-1 Twilight Meteor also up close in third. At the top of the stretch, jockey Garrett Gomez angled Proudinsky wide for running room. Proudinsky powered past Daytona at the 1/16 pole to get the 1 length win in 1:50.44. 40-1 longest shot French Beret, who was way back in seventh early, put in a strong rally down the center of the course to catch Daytona at the line to get second place money by a neck. 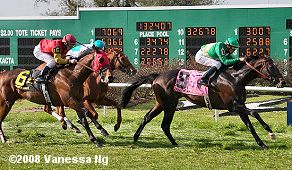 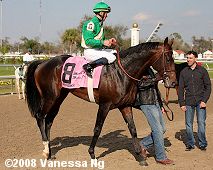 Proudinsky parades after the race. Scott Hansen, assistant to winning trainer Bobby Frankel said, "The colt came in a day late (from California), trained for a few days, I put the saddle on him and away he went to the winner's circle."

His jockey Garrett Gomez said, "I had to tuck my horse in going into the first turn. That took a little more out of him than I wanted. I saw Daytona appearing to get tired at the 3/8 pole, and my horse was getting more run. When I turned for home, I let him go, he switched leads and he got it done." 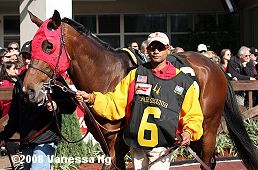 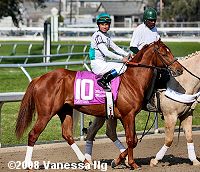 Left: Second place finisher French Beret in the paddock. The Mark Frostad trainee was wide throughout, racing back in 7th most of the way, but rallied gamely to steal second away from the favorite with jockey James Graham aboard. He improved his record to 3 wins, 5 seconds, and 7 thirds in 24 starts, earning $488,646 for owner and breeder Sam-Son Farms.

Right: Third place finisher Daytona in the post parade. His jockey Alex Solis said, "I believe the ground was softer today than last time. That may have hurt a little, but we still ran a great race."


Kicking off the stakes action on Louisiana Derby day was the $200,000 Duncan F. Kenner Stakes for older horses. A field of just 5 started, after two were scratched. Undefeated 6-5 favorite Euroears stalked the early pace of 7-2 Semaphore Man of 22.13 and 45.66, then took over the lead at the 3/16 pole, drawing off to win by 3 1/4 lengths in 1:09.27, improving his record to a perfect 6 for 6. It was another 2 lengths back from Semaphore Man to 3-1 second choice Noonmark in third. 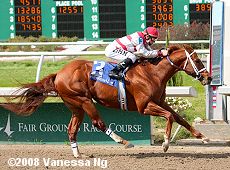 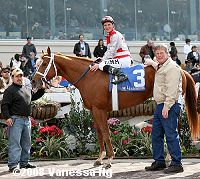 Euroears in the winner's circle. His trainer Bret Calhoun said, "He is fantastic. It is very impressive that he has walked up the ladder of conditions and stakes this fast, considering his late start. He keeps getting more seasoning with each start. The plan before this was the Texas Mile (G3), but I don't know if we'll stick with that or not."

His jockey Ramsey Zimmerman said, "He is incredible. He does it so easy, but still has such a cannon when called." 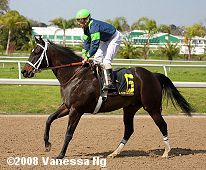 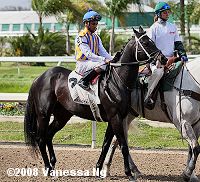 
Closing out the stakes action on Saturday was the $100,000 Bienville Stakes for older fillies and mares sprinting about 5 1/2 furlongs on the turf. 10-1 Princess Janie set the early pace of 22.39 and 47.03 over the yielding course before fading at the top of the stretch. 11-1 Danceroftherealm, who was 8th down the backstretch, came out wide and rallied down the center of the course to win by 1 3/4 lengths over 2-1 favorite Jazzy in 1:04.74. It was another 1/2 length back to 38-1 longest shot Kindling in third. 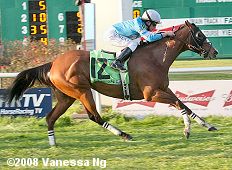 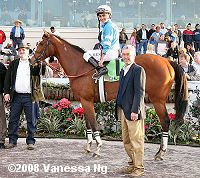 Danceroftherealm in the winner's circle. Winning jockey Miguel Mena said, "I was a little worried about the 12-hole, but she broke very well. It allowed me to save a lot of ground. Down the backstretch, I angled her out, and when I asked her, she made a big move."