The $1 million TwinSpires Louisiana Derby (G2) is the highlight of the Fair Grounds meeting, and is the major local Kentucky Derby prep race, worth 100 points to the winner as part of the Kentucky Derby Championship Series. Conditions were excellent in New Orleans with partly cloudy skies and temperatures in the high 70's, with stiff 30 MPH wind gusts. The main track was rated fast and the Stall-Wilson turf course was firm. A field of 10 three-year-olds went to post in this 1 1/8 mile test on Saturday afternoon, with Risen Star (G2) third place finisher Noble Indy sent off as the 5-2 favorite. In to challenge him included 11-4 second choice Bravazo, winner of the Risen Star, and 3-1 third choice My Boy Jack, winner of the Southwest (G3).

Jockey Jack Gilligan sent 141-1 longest shot Marmello to the lead through fractions of 22.97 and 46.64 while pressed by Noble Indy and stalked by Bravazo. On the far turn, Marmello tired as Noble Indy gained a 2 length lead through 3/4 in 1:11.47. 9-1 Lone Sailor, 7th early under James Graham, came out 3 wide for room and swept to the front through a hand-timed mile in 1:37.29. However, Noble Indy, confidenly ridden by John Velazquez, fought back to win by a neck in 1:50.28. It was another 1/2 length back to late-running My Boy Jack third. 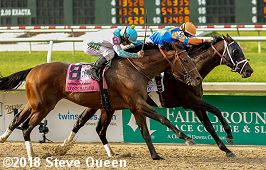 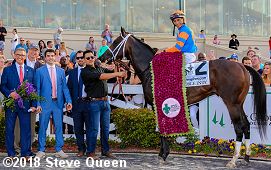 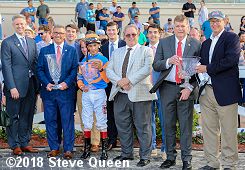 Left: Noble Indy in the winner's circle. Winning trainer Todd Pletcher said, "I think the blinkers had him more focused. I was a little concerned early on, he was a little too head strong. Johnny made a good tactical move letting the pace setter go and then getting outside of the horse. He fought back hard, finished up well and galloped out with enthusiasm. This race was a big step in the right direction. I was pleased with the way he conducted himself. He seems to be maturing as he gets more experience." 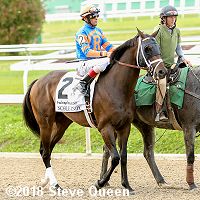 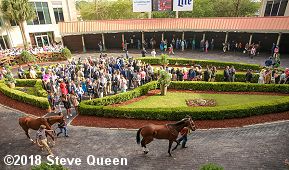 Right: Looking down into the paddock before the Louisiana Derby. 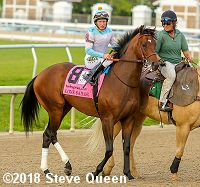 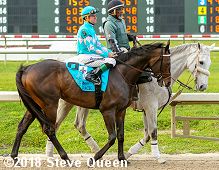 Left: Second place finisher Lone Sailor in the post parade. Trainer Tom Amoss said, "This guy reminds me a lot of Mylute, who came from off the pace and just got beat a neck in the Louisiana Derby and that's what happened to day with Lone Sailor. We've got the points now. I know the group wants to go to the Kentucky Derby and I stand behind that as well so if he's happy then we're going to go. We had a little traffic on the turn. I'm not going to knock it; that's horseracing. We got outrun down the lane. We engaged the winner and he fought us to the wire. We just couldn't put him away." Owner Tom Benson, who also owned the New Orleans Saints and New Orleans Pelicans, passed away on March 15. Amoss added,"I'm not going to get spiritual about this whole thing, but I will tell you this. I really felt like Mr. Benson was with us today."

Right: Third place finisher My Boy Jack in the post parade. Co-owner Sol Kumin said, "We got to the fence early and saved ground, which is exactly what we wanted to do. Unfortunately we had to go six- or seven-wide and that was probably the difference. I actually thought we were going to win. (Trainer) Keith (Desormeaux) had said that if he needed the points he'd think about wheeling back in the Arkansas Derby but we'll wait to see how he comes out and what Keith wants to do. In Keith we trust." Jockey Kent Desormeaux added, "I was galloping. I moved too soon. When I asked him to go I said, ‘he can't lose, there's no reason to be cute.' He went so fast from last to first that he couldn't sustain that kick and the last 100 yards he faltered a little bit. I think that's my fault, 100%."


The distaff counterpart to the Louisiana Derby is the $400,000 TwinSpires Fair Grounds Oaks (G2) for 3-year-old fillies, and worth 100 points to the winner as part of the Kentucky Oaks Championship Series. A field of 7 contested this 1 1/16 mile test, with Classy Act sent off as the 11-10 favorite off her second place finish in the Rachel Alexandra (G2). In to challenge her included 9-5 second choice Wonder Gadot, third in the Rachel Alexandra after finishing a close second in the Silverbulletday, and 4-1 third choice Eskimo Kisses, winner of 2 straight allowances and making her stakes debut here.

Jockey Javier Castellano sent Classy Act to the lead first time by through fractions of 23.39, 46.28, and 1:11.02 while as many as 2 lengths ahead of 28-1 She's a Julie and 22-1 America's Tale stalking her 2nd and 3rd respectively. Entering the stretch Classy Act continued to lead through 1 mile in 1:37.67 but tired late. 14-1 Chocolate Martini, 6th early, came out 5 wide for room under Mitchell Murrill and rallied to win by a head over Eskimo Kisses in 1:44.44. It was another 3/4 length back to Wonder Gadot third, and 1/2 more to favorite Classy Act fourth. 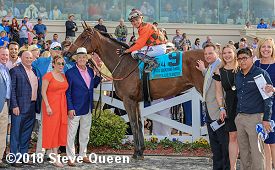 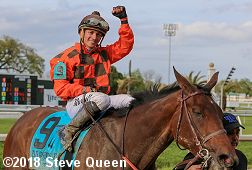 Left: Chocolate Martini in the winner's circle. Winning trainer Tom Amoss said, "We were very, very lucky to get this horse just as she was starting to become a better racehorse, which you see a lot with the young horses. I can't stress enough how lucky we were to get her while she was maturing. You can't keep these owners away from the Kentucky Oaks. As long as she's healthy we're going to run there."

Right: Chocolate Martini returns after the race. Winning jockey Mitchell Murrill, celebrating his first graded stakes win, said, "We were running a little short toward the end, but she had a lot of gameness to her. The race set up kind of how I planned, with a blistering pace up front. I just held her together and waited to punch the button." 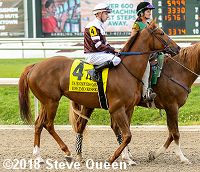 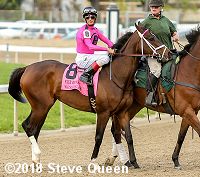 Left: Second place finisher Eskimo Kisses in the post parade. Jockey Florent Geroux said, "I was scrubbing the whole way. They went pretty quick and they came back, but it was too late. I thought I had it at the top of the stretch." 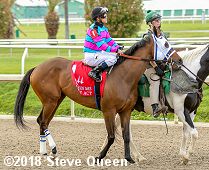 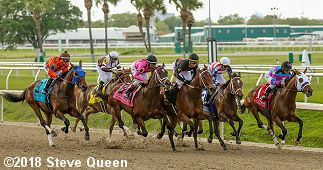 Left: Beaten favorite and fourth place finisher Classy Act in the post parade. Jockey Javier Castellano said, "She's the type of horse if she wants to go she'll get rank in the first part of the race. In my opinion, she doesn't want to go that far. At two turns she gets too rank and she's not going to get there."

Right: First time by in the Lousiana Derby with eventual winner Chocolate Martini in 6th on the outside.


The $300,000 Mervin H. Muniz Jr. Memorial Handicap (G2) featured a field of 11 older horses going about 1 1/8 miles on the turf. Synchrony was sent off as the 3-1 favorite off his win in the Fair Grounds Handicap (G3). In to challenge him included 7-2 second choice Lucullan, an allowance winner last out, and 15-4 third choie Forge, second in the Tampa Bay Stakes (G3). 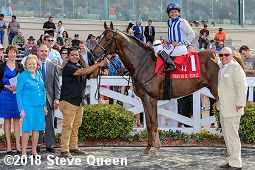 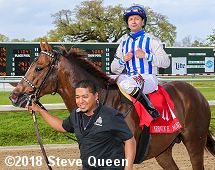 Left: Synchrony in the winner's circle. Winning trainer Mike Stidham said, "The thing that's so incredible about this horse is he is so adaptable. He can sit back last and make a big run late or if you need to use him like we did today and be a little closer he can do that too. That's what is so cool about the horse. This was a pretty big step up in class. There were some really good horses in here. It was a deep, contentious field."

Right: Synchrony returns after the race. 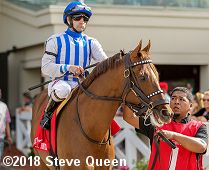 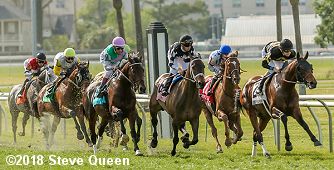 Left: Synchrony heads out to the track before the race. Winning jockey Joe Bravo said, "He's on the path to being a really nice horse. Mike figured him out. The horse is happy and he's enjoying himself. He was so willing. We sat right in the pocket comfortably and watched it unfold."

Right: Down the stretch in the Mervin H. Muniz Jr. Memorial Handicap. 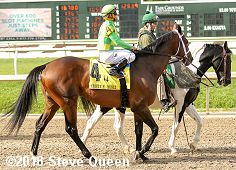 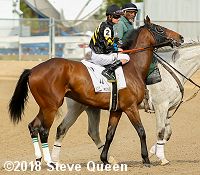 Jockey Calvin Borel sent The Player to the lead first time by through fractions of 23.88 and 48.18 while pressed by 21-1 Han Sense and stalked by Scuba. On the turn Scuba took over the lead therough 3/4 in 1:11.85, as The Player took a bad step at the 5/16 pole and was pulled up by Borel. Turning for home, jockey Joel Rosario angled Good Samaritan out to the 5 path for room, taking over through 1 mile in 1:37.27. Kept to task by Rosario, Good Samaritan drew off to win by 2 1/4 lengths over late-running 14-1 Hollywood Handsome in 1:49.87. It was a long 5 lengths back to Scuba third. 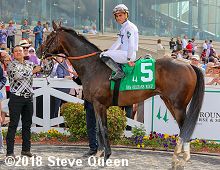 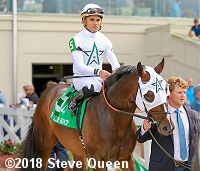 Left: Good Samaritan in the winner's circle. Elliott Walden of owner WinStar Farm said, "Bill (Mott, trainer) had this on his radar from the start of the year. Bill had him trained to the minute, and he was ready to go." Riley Mott, assistant to father Bill added, "It was nice to see them pressing toward the middle of the backside. Joel knows the horse and he knows he'll give him a run. We were confident he'd put in the run that he did and he had the long stretch to do it and it all worked out. He's a pure racehorse. He can run on dirt, turf, multiple distances. We really have an array of options but we'd love to get a Grade 1 on the dirt with him; that's the primary goal."

Right: Good Samaritan heads out to the track before the race. Winning jockey Joel Rosario said, "He was happy where he was. He just loves to run, and he finished really well the last quarter of a mile." 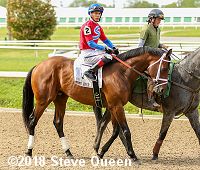 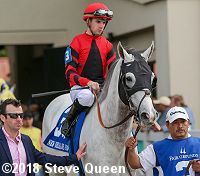 Right: Third place finisher Scuba heads out to the track. The Brendan Walsh trainee improved his record to 7 wins, 7 seconds, and 5 thirds in 27 starts, earning $741,210 for owner DARRS Inc. 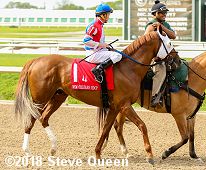 Beaten favorite (DNF) The Player in the post parade. After being pulled up by jockey Calvin Borel, a Kimzey splint was aplied by the veterinarian and he was vanned back to the barn with a sesamoid fracture in his right front leg. Owner-trainer Buff Bradley said soon after, "Obviously we're trying to save him. Right now we're sending X-rays to the surgeon to see what to do." Later Bradley announced The Player will have surgery on Monday at Louisiana State University. "He broke both sesamoids in his right front leg. He's at the LSU clinic and is comfortable. He is going to have surgery to fuse the ankle on Monday. You worry about complications, but I talked to Carl (co-owner Hurst) and we are going to do everything we can for him (The Player) within reason."