Fair Grounds Race Course hosted 4 graded stakes races on Saturday afternoon for Louisiana Derby Preview Day, including one of the major Triple Crown prep races: the $400,000 Risen Star Stakes (G2) presented by Lamarque Ford, the major local prep for the Louisiana Derby and worth 50 points to the winner as part of the Kentucky Derby Championship Series. Conditions were excellent at the historic New Orleans track, with cloudy skies and temperatures in the mid 70's, the main track rated fast and the Stall-Wilson turf going firm. A field of 9 three-year-olds went to post in this 1 1/16 mile main track feature, with Instilled Regard sent off as the 7-5 favorite off his win in the LeComte (G3) after finishing third in the Los Alamitos Futurity (G1). In to challenge him included 5-2 second choice Noble Indy, undefeated in 2 starts and making his stakes debut here, and 3-1 third choice Principe Guilherme, second in the LeComte.

Jockey Adam Beschizza sent 42-1 Snapper Sinclair to the lead first time by and he set fractions of 24.15, 47.96, and 1:12.85 while pressed by 21-1 Bravazo and stalked by Noble Indy. At the top of the lane Snapper Sinclair continued to lead through 1 mile in 1:36.75. Jockey Miguel Mena angled Bravazo to the 4 path for room and the pair dueled for the final 1/16. Bravazo prevailed by a nose in 1:42.95. It was another 2 lengths back to Noble Indy third, and a neck back to favorite Instilled Regard fourth. 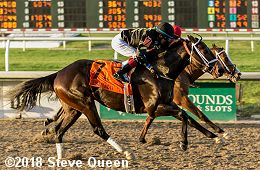 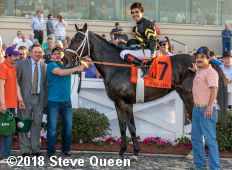 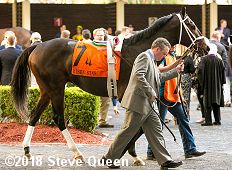 Left: Bravazo in the winner's circle. Winning trainer D. Wayne Lukas said, "I think it was just maturity. He kind of tipped his hand when he ran second in the Breeders' Futurity at Keeneland last year. He ran a very strong race, and I thought he kind of turned the corner. The real turning point, though, was opening week at Oaklawn. The track was not very fast, and he ran a mile in 1:37 and change. We felt he was headed in the right direction. He's a solid, hard-trying horse with good tactical speed. That was a great effort today. I thought Miguel was a good fit (to replace regular rider Gary Stevens). He rides that track so well."

Right: Bravazo in the paddock. Winning jockey Miguel Mena said, "I thought it was too close to call. I didn't know if I'd won. The horse came out of the gate sharp. I didn't think I was going to be that close to the lead. He was on the bridle nice the whole way. I was confident I had a lot of horse, but that was a game horse on the inside. That horse doesn't give up." 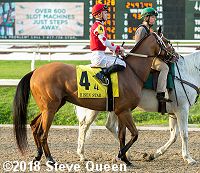 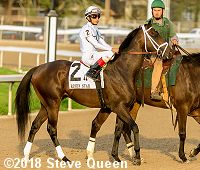 Left: Second place finisher Snapper Sinclair in the post parade. Jockey Adam Beschizza said, "He's going to win some nice races, but it's very disappointing. I'm delighted the horse has improved, and he's obviously taken a step in the right direction, but it's a bitter pill to swallow."

Right: Third place finisher Noble Indy in the post parade. Jockey John Velazquez said, "That's what I wanted to do. I wanted to teach him something. If I broke to the lead, I might win the race, but I won't learn anything. He did everything good - just a little green is all." 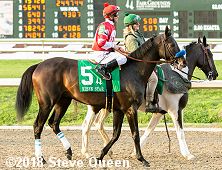 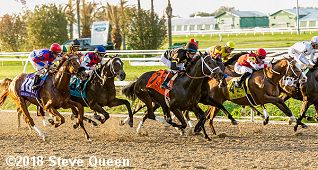 Left: Fourth place finisher and beaten favorite Instilled Regard in the post parade. Jockey Javier Castellano said, "I had a perfect trip, same way as the last time, but for some reason he didn't show up. I had a nice, comfortable rhythm behind those horses. I was looking for that kick and he never gave it to me."

Right: Shortly after the start with eventual winner Bravazo mid-pack. Florent Geroux aboard Principe Guilherme (post 9, finished 7th) said, "I couldn't really put him where I wanted, but I expected the horse to help me out a little bit."


The distaff counterpart to the Risen Star is the $200,000 Rachel Alexandra Stakes (G2) for 3-year-old fillies also going 1 1/16 miles on the main track, worth 50 points to the winner as part of the Kentucky Oaks Championship Series. Golden Rod (G2) winner Monomoy Girl was sent off as the 9-10 favorite in the field of 7. In to challenge her included 2-1 second choice Wonder Gadot, winner of the Demoiselle (G2) but 2nd in the Silverbulletday, and 7-1 third choice Classy Act, making her stakes debut off allowance wins. 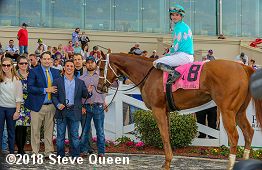 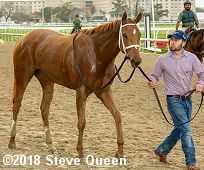 Left: Monomoy Girl in the winner's circle. Winning jockey Florent Geroux said, "At the 3 1/2 pole, I started feeling confident when I went by Wonder Gadot and I was fully loaded. The horse on the lead was coming to me fairly easily. When she passed a horse or two, she started getting confidence and jumped on the bit. From there, she wanted to go. I think there's a couple things we can work on with Brad and his team. The main thing is we know she can run, and she can run fast."

Right: Monomoy Girl heads back to the barn after the race. Winning trainer Brad Cox said, "We learned a lot about her today, that she'll overcome things like dirt in the face, and she'll pass horses. It was probably a good thing she got away slow like that. We thought she'd be sitting right there off Javier's filly, but it worked out great. She proved herself today. She acts like she can get the (Kentucky Oaks) distance. You can see she's still a little bit of a funny filly to deal with, as you could tell when Florent hit her left-handed, but she's learning and we're lucky to have her. Obviously the Kentucky Oaks is the goal, so we'll kind of work backwards from there. We thought this would be the perfect race off the layoff." 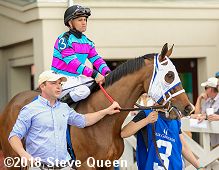 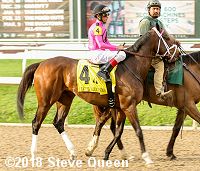 Right: Second place finisher Classy Act heads out to the track before the race. Trainer Bret Calhoun said, "One thing you don't want to do with her is smooch at her or take a little hold, and because she did break tardy, Javier had to push on her a little bit, and she jumped on the bridle a little harder than he wanted, got a little too keen. Overall, I was happy with it. If she looks good after this and bounces back, I think we will come back for the Fair Grounds Oaks."

Left: Third place finisher Wonder Gadot in the post parade. Trainer Mark Casse said, "It's tough. Johnny (Velazquez) thought maybe he wished he went on with her a little bit but we did that last time and it didn't work. The winner did everything wrong and was impressive. We'll see what happens. She's a Canadian bred. She's got a lot of options."

Just after the start of the Rachel Alexandra Stakes with Monomoy Girl on the outside. 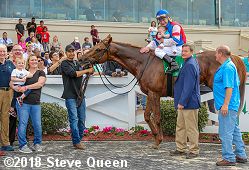 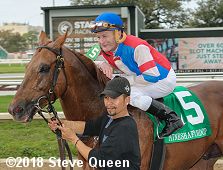 Left: The Player in the winner's circle with jockey Calvin Borel holding his new son Chase. Winning co-owner and trainer Buff Bradley said, "We thought he'd win last time. We had blinkers in our head for a little bit. We knew we needed to get a little bit more focus. Going down the backside, Calvin (Borel) had that nice hold on him and he was just so relaxed and running easily. He said 'He needs to know when those horses are coming to him' and said that he was quite a bit more focused today. And I think just watching, I thought that the horses were going to come to him but Calvin never even asked until the eighth pole. When Calvin was looking around at the quarter pole I said, 'They're not going to catch them today.'"

Right: The Player returns after the race. Winning jockey Calvin Borel said, "I didn't want to be on the lead, but we went slow enough, I thought. I smooched at him at about the eighth pole and he re-broke like he was supposed to. I was very impressed with him." 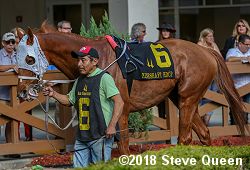 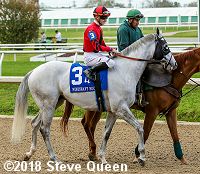 Left: Second place finisher Thirstforlife in the paddock. He improved his record to 4 wins, 3 seconds, and 3 thirds in 14 starts, earning $218,715 for owner-trainer Wesley Hawley 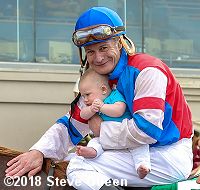 Left: The start of the Mineshaft Handicap.

Right: A close-up of jockey Calvin Borel holding his son Chase aboard The Player in the winner's circle. "He ran at Keeneland and did it impressive but he kind of just lost interest," Borel added. "The works were there every morning and I just couldn't understand it. He's so much better than these horses. It was very disappointing and he just wasn't focused, so me and the boss talked and I worked him and he was a totally different horse. He got focused like he's supposed to be." 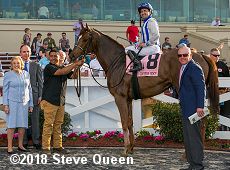 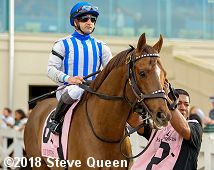 Left: Synchrony in the winner's circle. Winning trainer Mike Stidham said, "Certainly we were hoping for an effort like this, and we got it, but this was a plan that started way back in the summer. We all got together and decided to give the horse some time and it paid off. We're excited to have him back in this good form and hopefully it will carry throughout the year."

Right: Synchrony heads out to the track before the race. Winning jockey Joe Bravo said, "Horses like this that are coming off the bench you don't know what to expect or how they're going to run. But he's doing everything so well in the morning but you never know until race day. When we came to the three-eighths pole he was still breathing and relaxed and just watching them guys. Man, that's what I live for it was pretty fun. You got to thank (trainer) Mike (Stidham) for taking him off the bench like that." 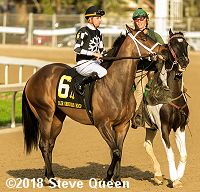 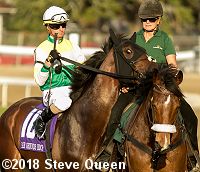 Left: Second place finisher and beaten favorite Mr. Misunderstood in the post parade. "He ran incredibly well," said trainer Brad Cox. "We were very pleased with the effort, but we were second best today."