2018 "Road to the Derby" Kickoff Day at the Fair Grounds

Fair Grounds Race Course in New Orleans hosted its "Road to the Derby Kickoff Day" card on Saturday with five stakes races. Conditions were chilly with sunny skies and temperatures in the mid 40's, with the main track fast but rain earlier in the week downgraded the Stall-Wilson turf course to soft. The highlight of the afternoon was the $200,000 Lecomte Stakes (G3) for 3-year-olds going 1 mile 70 yards on the main track. The race is a points-scoring race in the Road to the Kentucky Derby series, the points system used to determine Derby starting spots. Principe Gulherme was sent off as the 6-5 favorite in the field of 13, undefeated in 2 starts and making his stakes debut here. In to challenge him included 2-1 second choice Instilled Regard, third in the Los Alamitos Futurity (G1), and 13-2 third choice Lone Sailor, fifth in the Kentucky Jockey Club (G2). 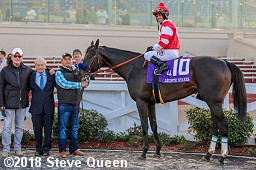 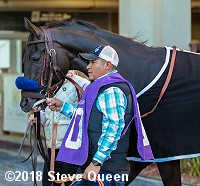 Left: Instilled Regard in the winner's circle. Winning trainer Jerry Hollendorfer said, "I'm very grateful to be here. I talked it over with (owner Larry Best) and we came up with the decision to bring him to the Fair Grounds mostly because it was Larry's idea and it was a good idea as we can see it worked out.  We haven't been around here much but it was a good race to run in and the time was good, too. The best thing about him other than his raw talent is that nothing bothers him. He ships well and settles in wherever he goes."

Right: Instilled Regard in the paddock before the race. Winning jockey Javier Castellano said, "I didn't want to dictate the pace it was only his third time going two turns. He put himself in good track position. "I could've gone to the whip and I didn't want people chasing me. I wanted to save it for the finish. He's a great horse and he's got a great mind and I like the way that he conducted himself."

Shortly after the start of the Lecomte Stakes. Steve Asmussen, trainer of 4th place finisher Zing Zang (8) said, "He ran well. I don’t think they write races as far he wants to run. Watching the replay, he seemed off the bridle but ended up running his best through the wire. The good news is that the more money is longer." 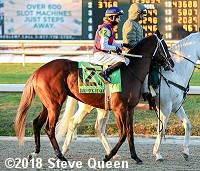 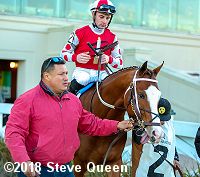 Left: Second place finisher and beaten favorite Principe Guilherme in the post parade. Trainer Steve Asmussen said, "I didn't want (Principe Guilherme) to get beat, but it happened. That was a pretty tough trip to win from. He stayed on nicely. Obviously, I'd have liked for him to gotten over in front of them (going into the first turn). He ran solid but not great. I thought he handled that well, the kickback. He was a little tucked in down the backside. As smooth as his first two races went, there was a lot of variables in it for him there (today)."

Right: Third place finisher Snapper Sinclair heads out for the post parade. Trainer Steve Asmussen said, "I was surprised to see him at 28-1. In the (Breeders' Cup) Juvenile Turf at Del Mar, he had no chance with the draw. I'll talk with (owner) Jeff Bloom as far as what is next."

Jockey Jose Valdivia Jr. sent 74-1 Shes Our Fastest to the lead through fractions of 23.57 and 47.43 while pressed by Wonder Gadot and stalked by Heavenly Love. On the far turn, Wonder Gadot gained a short lead through 3/4 in 1:13.69, but 33-1 Stronger Than Ever, last early under Florent Geroux, circled the field 5 wide to collar Wonder Gadot at the 1/8 pole through 1 mile in 1:39.98. The pair dueled to the line, as Stronger Than Ever outfinished Wonder Gadot by a hard fought neck in 1:44.28. It was a long 4 1/2 lengths back to 23-1 Missive third.
Results Chart 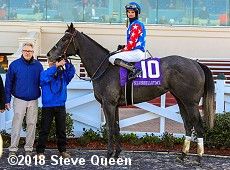 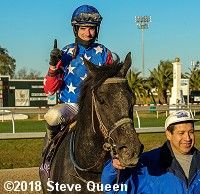 Left: Stronger Than Ever in the winner's circle. Greg Geier, assistant to winning trainer Ken McPeek said, "She did everything like she was supposed to do. Hopefully we can go from here. I thought she would run well especially with the pace that was in the race and we just let them sit there and wait and make one big run. She ran a good race at Remington, she stuck wide out there and got a little tired but she did fine today. We'll see what Kenny wants to do (for her next start)."

Right: Stronger Than Ever returns after the race. Winning jockey Florent Geroux said, "The trip was not great, actually. My filly fought very hard all the way to the wire. (Wonder Gadot) gave my filly a run for her money. The distance wasn't an issue and she showed that she can race pretty well. There was a very honest pace up front and I think that my filly is pretty nice." 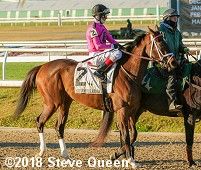 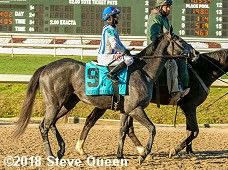 Left: Second place finisher and beaten favorite Wonder Gadot in the post parade. Trainer Mark Casse said, "I thought she ran well, we just got unlucky. She fought on and she probably wants a little more ground where she doesn't have to be so aggressive early. It'll be interesting because I think the time will end up being fairly good. I've got to think about (running in the Rachel Alexandra), but probably."

Right: Third place finisher Missive in the post parade. Trainer Mike Stidham said, "Very pleased to get stakes placing. I thought she ran a big race. Off that effort, I would probably say we run in the next one as long as she comes out of it okay." 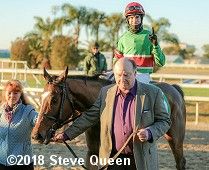 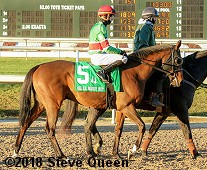 Left: Tower of Texas heads to the winner's circle. Winning owner Scott Dilworth said, "It 0was suggested by (trainer) Roger (Attfield) to come here. When he said come to New Orleans and Fair Grounds, you got good food, good horse racing. What else can I say? He's been so good to us. We've been so blessed with him and as long as he's enjoying running, we'll be there for the ride."

Right: Tower of Texas in the post parade. Winning jockey Florent Geroux said, "It was a great trip. I was right in the pocket all the way. The horse was very kind. He's an older horse so he knows what to do and knows when to go. He was really trying hard, and once I got clear, that was it." 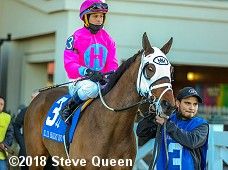 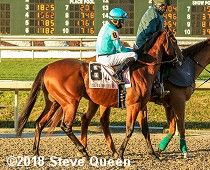 Left: Second place finisher Galton heads out for the post parade. The Mike Maker trainee improved his record to 11 wins, 11 seconds, and 6 thirds in 39 starts, earning $501,990 for owner Michael Hui.


The distaff counterpart to the Col. Bradley is the $75,000 Marie G. Krantz Memorial Stakes, with a field of 9 older fillies and mares also going about 1 1/16 miles on the turf. Allowance winner Mom's On Strike was sent off as the 7-5 favorite over 11-4 Inveniam Viam, winner of the Louisiana Ladies and Si Ciam Stakes, and 5-1 Giada Vegas, winner of the Blushing KD Stakes. 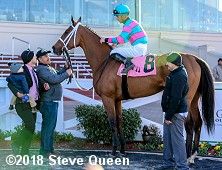 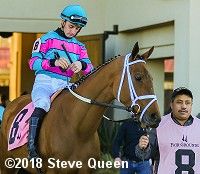 Left: Mom's On Strike in the winner's circle. Winning trainer Joe Sharp said, "I'm glad to see that we're getting her the clean trip even though it's a little wide it seems to be the ticket with her. There's plenty of stretch to make up all the ground she needs to. It's one of those deals where when you're clicking, you're clicking," Sharp said "Adam and I go way back and he's very comfortable when he rides for us and I think that helps a lot. Obviously there's pressure but there's a lot of respect and a lot of trust that we've put in one another and I think that alleviates a lot of the pressure and allows him to operate better."

Right: Mom's On Strike heads out for the post parade. Winning jockey Adam Beschizza said, "I had a nice pitch the whole way around. I just thought I was running a bit low in horse coming into the turn but she's obviously taking the right steps to being a nice animal. As soon as we turned into the straight, she engaged and lengthened away. The Fair Grounds suits her really well, she's got a big stride and the long stretch really suits her. I can't say enough for Joe Sharp and Brad Grady and Carl Moore. They have been a great help to me. I can only take a small chunk of the credit. They have put in the hard work and I just have to go out there and do the steering."


Kicking off the stakes action on Saturday was the $75,000 Duncan F. Kenner Stakes, with a short field of just 5 older horses sprinting 6 furlongs on the main track. Jockey Adam Beschizza sent 8-1 Blue Wings to the lead through fractions of 22.40 and 46.37 while pressed by 2-5 favorite Yockey's Warrior and stalked by 4-1 Chublicious. Turning for home, jockey Miguel Mena sent Yockey's Warrior to the front through 5f in 58.18. Kept to task by Mena, Yockey's Warrior drew off to win by 2 1/4 lengths over Chublicious in 1:10.43. It was 4 lengths back to pacesetter Blue Wings third.
Results Chart 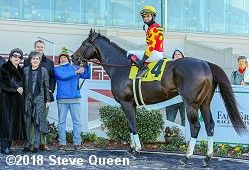 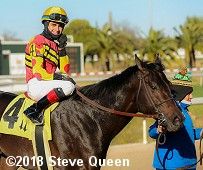 Left: Yockey's Warrior in the winner's circle. Winning trainer Al Stall Jr. said, "When he races hard and sharp like that, you're going to get a good effort from him. He can get his air now and that's a big plus obviously. The talent is there so it's all about keeping him together."

Right: Yockey's Warrior returns after the race. Winning jockey Miguel Mena said, "He was so much the best. He's the best he's ever been. He pulled up he like it was it a workout. I've been riding him for a long time, and since they did throat surgery on him he's been unbelievable. He gets his air 100% and he just keeps winning easy. We'll see how things go when he gets to the next level."