Fair Grounds Race Course hosted 4 graded stakes races on Saturday afternoon for Louisiana Derby Preview Day, including one of the major Triple Crown prep races: the $400,000 Risen Star Stakes (G2) presented by Lamarque Ford, the major local prep for the Louisiana Derby and worth 50 points to the winner as part of the Kentucky Derby Championship Series. Conditions were excellent at the historic New Orleans track, with cloudy skies and temperatures in the low 70's, the main track rated fast and the Stall-Wilson turf going firm. A full field of 14 three-year-olds contested this 1 1/16 mile main track feature, with Breeders' Cup Juvenile Turf (G1) 5th place finisher War of Will sent off as the even-money choice off his win in the LeComte (G3). In to challenge him inluded 6-1 second choice Plue Que Parfait, 5th in the LeComte, and 7-1 third choice Country House, off his maiden win at 3rd asking. 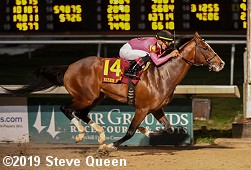 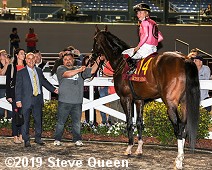 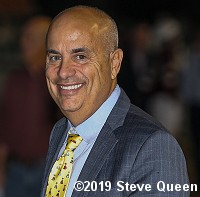 Left: War of Will in the winner's circle.

Right: Winning trainer Mark Casse after the race. Casse said,"I get more nervous when he runs than most horses, and I think that's just because I expect so much of him. Ours is so nice because, as you saw today, he's able to overcome obstacles if they're thrown at him. I really wasn't worried about the outside post. For a big horse, he has tremendous speed. He had to hit the gas a little to get over, so that got him a little riled up. It's like hitting the gas and then trying to hit 'stop,' you know, they're not as easy to stop as a car. He probably made the lead a little earlier than we'd like. He's done this a few times, especially early on. When he hits the lead, his old ears will start wandering and stuff. He keeps winning, there will be some big targets for him to chase." Winning jockey Tyler Gaffalione said, "He handled easily the whole way. He just keeps getting better." Casse added that he will go next in the Louisiana Derby. 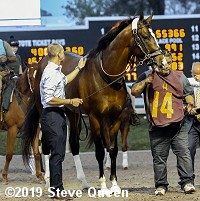 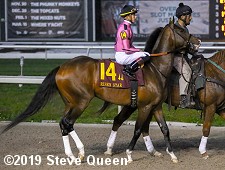 Left: War of Will heads to the paddock before the race.

Right: War of Will in the post parade. Winning jockey Tyler Gaffalione said, "The horse broke well today. I had the horse inside, Dunph, going to the lead and then (Gun It) showed a little bit of speed. When I saw they were intent on going I just tried to get him back and got him to relax. He came back to me nicely and settled well down the backside. Got a little keen going into the far turn and wanted to move a little early. But I didn't want to take too much away from him so I tried to sit as long as I could. He was waiting on horses down the lane but I kept him at task and there was plenty of horse there." 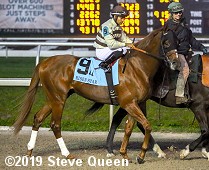 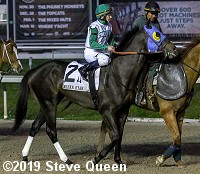 Left: Second place finisher Country House in the post parade. Trainer Bill Mott said, "It was a good race; the horse showed he could run. He looked green, he was lugging in in the stretch. He's never done that before, and we think maybe he's just green, lights, other horses."

Right: Third place finisher Roiland in the post parade. Trainer Tom Amoss said, "He ran to the way he's been training." Jockey James Graham said, "He didn't break real good but finished off real well. We saved all the ground, but he's still kind of figuring it out."


The distaff counterpart to the Risen Star is the $200,000 Rachel Alexandra Stakes (G2) for 3-year-old fillies also going 1 1/16 miles on the main track, worth 50 points to the winner as part of the Kentucky Oaks Championship Series. Breeders' Cup Juvenile Fillies (G1) 7th place finisher Serengeti Empress was sent off as the 9-5 favorite in the field of 8 over 3-1 Positive Spirit, winner of the Demoiselle (G2), and 5-1 Oxy Lady, 5th in the Starlet (G1) at Los Alamitos. 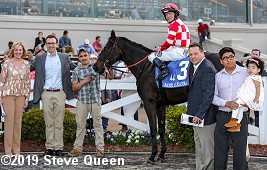 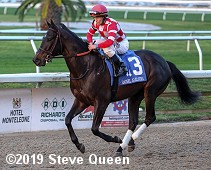 Left: Serengeti Empress in the winner's circle. Winning trainer Tom Amoss said, "She is very naturally quick and that helps her cause a great deal. Certainly this racetrack helped her cause. Having said that, I think that was a really good performance by a filly that a lot of people questioned whether she legitimately wanted to go a lot of ground. She took it to them today right out of the gate and it was fun to watch." 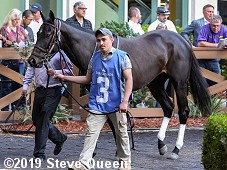 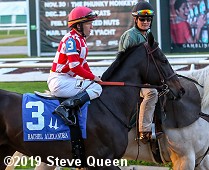 Left: Serengeti Empress in the paddock.

Right: Serengeti Empress in the post parade. Winning jockey James Graham said, "Her cruising gear is so good. You watch her races from Ellis Park and from Churchill, she bounces along on the front end and travels through her races beautifully. She put them to bed turning for home. She did it the right way. She's a little aggressive but she's fast." 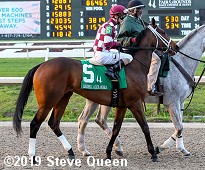 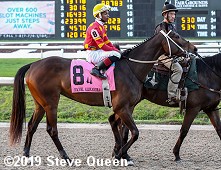 Right: Second place finisher Liora in the post parade. Trainer Wayne Catalano said, "Tom had his filly ready. I was impressed. My filly ran her race today. She was what they call 'second best.'" Jockey Channing Hill added, "Tom's filly is fast. My filly got bounced around a little down the backside and didn't get herself put together until the top of the lane. I was real proud of the effort." 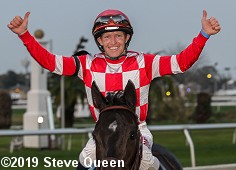 Left: The fillies just after the start of the Rachel Alexandra Stakes.


Kicking off the graded stakes quartet, a field of 10 older horses contested the $150,000 Mineshaft Handicap (G3) over 1 1/16 miles on the main track. Breeders' Cup Classic (G1) 6th place fnisher Lone Sailor was sent off as the 2-1 favorite over 5-2 Harlan Punch, winner of the Louisiana Stakes, and 5-1 Silver Dust, 2nd in the Louisiana.

Jockey Tyler Gaffalione sent 11-2 fourth choice Flameaway to the lead through slow fractions of 25.93, 50.74, and 1:14.82 while pressed by 13-1 Phat Man and stalked by Silver Dust. Turning for home, jockey Jack Gilligan sent Silver Dust to the front through 1 mile in 1:39.08. Kept to task by Gilligan, Silver Dust drew off to win by 2 1/4 lengths over late-running Harlan Punch in 1:45.46. It was another 3/4 length back to Flameaway third, while favorite Lone Sailor trailed early and checked in 6th. 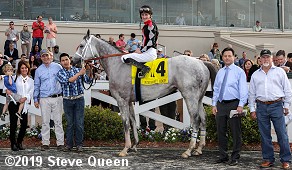 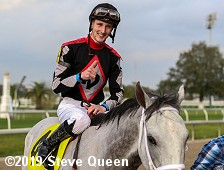 Left: Silver Dust in the winner's circle. Winning trainer Bret Calhoun said, "We've always thought very highly of this horse. It's been constant working with him trying to figure things out, constant schooling in the paddock and gate. He's starting to show up in afternoon like he does in morning."

Right: Winning jockey Jack Gilligan celebrates aboard Silver Dust after the race. It was the first graded stakes win for Gilligan, who said, "He's got the ability there, when he decides to put it forward. I was hoping to be third or fourth in the first turn, but we were able to move up when they slowed it down. He took me around there beautifully on the last turn. I just had to keep him busy down the lane." 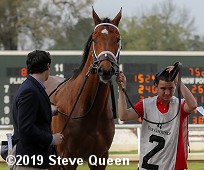 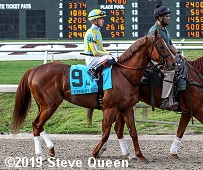 Left: Second place finisher Harlan Punch in the paddock. After unsaddling he was vanned off the track due to a left foreleg issue, but no fractures were detected by X-ray. The Brad Cox trainee improved his record to 10 wins, 10 seconds, and 5 thirds in 37 starts, earning $779,058 for owners Front Row Racng, Ten Strike Racing, Kevin McReynolds, and Bob Miller.


A field of 9 older horses went to post for the $150,000 Fair Grounds Handicap (G3) at about 1 1/8 miles on the turf. Last year's winner Synchrony was sent off as the 11-10 favorite off his third place finish in the Seabiscuit (G3) at Del Mar. In to challenge him included 7-2 second choice First Premio, winner of the Colonel E.R. Bradley, and 8-1 third choice Great Wide Open, third in the Bradley. 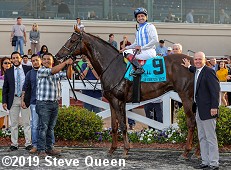 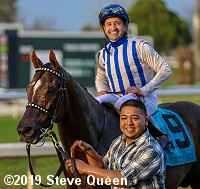 Left: Synchrony in the winner's circle. Winning trainer Mike Stidham said, "Schooling the last couple of days and coming into the paddock today, he was just so cool and so calm that I knew he was set up for a big one. We worried about the speed bias and I told Joe to not let him drift out the back door. We had to have some kind of position turning for home to have a shot to win and he did it. This is home and we would try to win the race again, we like to win at Fair Grounds. He's a really good horse. He has shown it over and over again. I think he's still got a Grade 1 sitting out there somewhere waiting for him."

Right: Synchrony returns after the race. Winning jockey Joe Bravo said, "He was the best horse in his last race, anyone could have seen it. In turf racing, it's all about getting position and how you win races like that is by putting them in position and he was unfortunate not to hit daylight. Today I was worried about the speed favoring turf course and I had to use him a little bit. What makes him a good horse is that he listens to the rider. He's a special animal and hopefully he stays healthy for the future. He makes the rider look good." 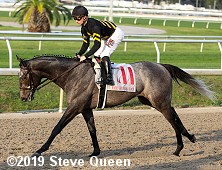 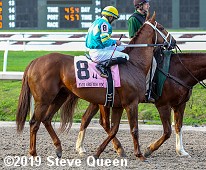 Left: Second place finisher Bandua returns after the race. Jockey Adam Beschizza said, "He's a horse I've always held in high regard. I couldn't believe he was such a price. This is probably the only time he's been settled in somewhere. He's always been on the move. He came here from Ireland, and then went to Chicago and Canada. He's become more Americanized. That's just the start of something. I can't say that his first two or three runs were truly him." 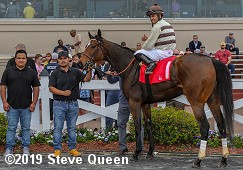 A field of eight older fillies and mares contested the $75,000 Albert M. Stall Memorial Stakes at about 1 1/16 miles on the turf. Beau Recall was the 9-10 favorite over 5-2 Mitchell ROad and 17-2 Pretty Lady. Jockey Florent Geroux sent 19-1 Coffee Crush to the lead first time by through fractions of 23.04, 47.22, and 1:11.06 while pressed by Michell Road and stalked by Pretty Lady. Entering the stretch jockey Luis Saez sent Mitchell Road to a 1 1/2 length lead through 1 mile in 1:35.26. Beau Recall, 7th early under Shaun Bridgmohan, put in a strong 3 wide rally but Mitchell Road held her off to win by 3/4 length in 1:41.32. It was another 2 lengths back to 9-1 fourth choice Coachwhip third.

Winning jockey Luis Saez said, "It was a terrific trip. That was the plan to see the speed, and when she got into the stretch, I had a ton of horse." 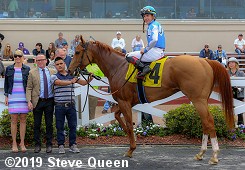 Kicking off the stakes action on Saturday was the $75,000 Colonel Power Stakes for older horses sprinting about 5 1/2 furlongs on the turf. Hogy was the 2-1 favorite in the field of 7 over 4-1 Wings Locked Up and 9-2 Latent Revenge. Jockey Gabriel Saez sent Latent Revenge to the lead down the back through fractions of 22.74 and 45.66 while pressed by 7-1 Savage Battle and stalked by 12-1 longest shot Kid Perfect. Turning for home, Latent Revenge continued to lead through 5f in 57.09 but 10-1 Chaos Theory, 6th ealy under Tyler Gaffalione, came out 7 wide for the drive and rallied to win by a length in 1:03.07. It was a neck back to Latent Revenge third.

Winning jockey Tyler Gaffalione said, "Brendan (Walsh, trainer) had the horse ready today. All I had to do was sit on him and wait. When I asked on him, he really turned it on, I just had to help him out of the gate a little."