The $300,000 Gotham Stakes (G3) is the first major New York prep for the Kentucky Derby, and is worth 50 points to the winner as part of the Kentucky Derby Championship Series. Conditions on Long Island were typical for early March, with partly cloudy skies and temperatures in the low 40's, and the main track rated fast. A field of 8 three-year-olds contested this 1 mile trip around one turn of the main track, with Instagrand sent off as the even-money choice, unraced since winning the Best Pal (G2) at Del Mar in August. In to challenge him included 9-2 second choice Haikal, winner of the Jimmy Winkfield, and 5-1 third choice Much Better, last of 14 in the Breeders' Cup Juvenile Turf (G1) and 3rd in the Sham (G3) before winning an allowance last out.

Jockey Mike Smith sent Much Better to a clear lead out of the chute and down the backstretch through fractions of 22.36, 44.42, and 1:09.23 while pressed by 20-1 Knicks Go and staled by Instagrand. Entering the stretch Much Better continued to lead through 7f in 1:22.32. Haikal, 7th early under Rajiv Maragh, came out 4 wide into the lane and rallied to win by 1 length over 11-2 fourth choice Mind Control in 1:35.63. It was 1/2 a length back to Instagrand third, and a nose back to pacesetter Much Better fourth. 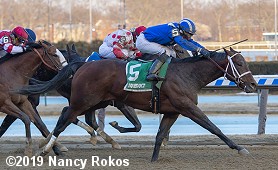 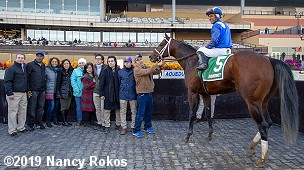 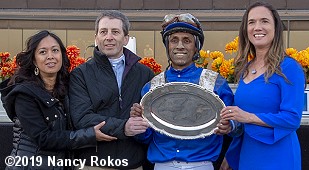 Left: Haikal in the winner's circle. Joe Lee, assistant to winning trainer Kiaran McLaughlin said, "That was actually the plan: let him settle early, and then make that run. Rajiv rode him perfectly. When I saw him closing I was just hoping he'd get there. I knew he was going to come, it was just a matter of if he was going to get there in time. Even at the 1/8 pole, 1/16 pole, I knew from the way he ran last time that he was still going to fight it out. Rajiv said he didn't get tired the last time he ran, so I thought with a nice trip, he'd make a run but that was great.

Right: Trophy presentation for the Gotham. Winning hockey Rajiv Maragh said, "I felt like he was full of run, and I felt like we kind of had them measured. I just hoped he'd continue his run and not ease up, and he continued running, so it worked out good. It wasn't that close at the end." 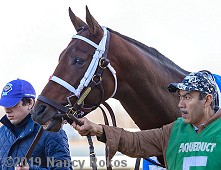 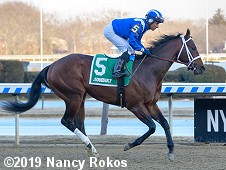 Left: Haikal walks over before the race. Maragh added, "He showed me every indicator that he'll excel the further the distance goes, so that's not anything that I'm concerned about. I'm actually looking forward to him running those long distances."

Right: Haikal in the post parade. Lee added, "Obviously, he's going the right way and he's the kind of horse that does relax early and doesn't have to be up in front to get caught in any speed duels or anything like that. He just runs his race." 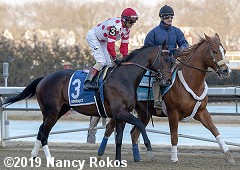 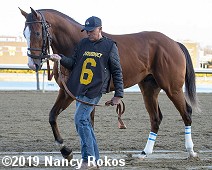 Left: Second place finisher Mind Control in the post parade. Jockey John Velazquez said, "He ran a huge race, but he got caught right at the wire. They went fast enough, and I was just trying to stay back and give my horse a chance. He ran like a good horse today, but the other horse got up to beat him at the wire."

Right: Third place finisher and beaten favorite Instagrand walks over before the race. Jockey Javier Castellano said, "I was fine with how he did it today. I'm not disappointed at all. He was off a long time and to bring him back at a mile, he only got beat a length. I like the way he rated behind horses. He doesn't have to be on the lead now. We can play both games. He can be right behind the horses. It's true progress for his third race. I'm very satisfied. I got beat, but I'm satisfied with the way he did it today."


Kicking off the stakes quartet, a field of 7 older horses contested the $200,000 Tom Fool Handicap (G3) over 6 furlongs on the main track. Last year's winner Skyler's Scramjet was the 2-1 favorite off his 2nd place finish in the Toboggan (G3), over 15-4 Bavaro, winner of the Hollie Hughes, and 7-2 Syndergaard, 2nd in the Haynesfield. 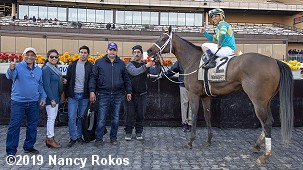 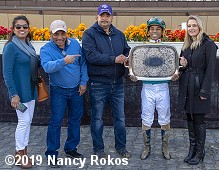 Left: Do Share in the winner's circle. Jockey Reylu Gutierrez, celebrating his fist graded stakes win said, "(Trainer Mike Maker) gave me an opportunity to ride in Oklahoma for him and here. My first open stakes for him was down in Gulfstream and now my first graded stakes win is for him here in New York, so I have to get a great Christmas present for Mr. Maker and his team. They do a phenomenal job. [Agent] Jimmy Riccio is always scouting for the best horses possible for Jose [Ortiz] and myself. He deserves just as much credit as anybody. He just finds these horses anywhere and they help me get to the finish line. It's awesome."

Right: Trophy presentation for the Tom Fool Handicap. Gutierrez (holding the trophy) added, "I'm lucky I had a nice pace to chase after. Studying the form, that was my idea coming into the race. Let him break, get a good warm up into him and try to catch whoever was fading. These horses were rolling early on and this horse ran really great. I saw that he had been working well and Mr. Maker and his team, they always have their horses ready for whatever comes their way." 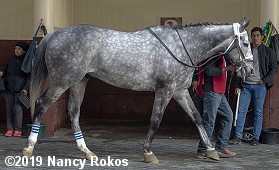 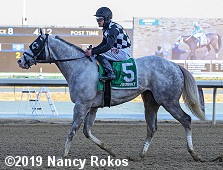 Left: Second place finisher Life in Shambles in the paddock before the race. Jockey Manny Franco said, "I had a good trip. I tried to let my horse fall back and make one run because I knew the pace was going to be hot. The winner was just too much the best. My horse gave me all he had, we were just second best today."

Right: Third place finisher Bavaro returns after the race. This was the Linda Rice trainee's first try at a graded stakes and his first loss since winning three races in a row.


The distaff counterpart to the Gotham is the $250,000 Busher Stakes featuring a field of 9 three-year-old fillies also going 1 mile on the main track, worth 50 points to the winner as part of the Kentucky Oaks Championship Series. Orra Moor was sent off as the 7-4 favorite, undefeated in 2 starts and making her stakes debut here, over 5-2 Please Flatter Me, winner of the Gin Talking Stakes, and 4-1 Espresso Shot, winner of the East View Stakes.

Jockey Jose Lezcano sent 33-1 Excess Capacity to lead through fractions of 23.51 and 46.58 while pressed by Orra Moor and stalked by 16-1 Filly Joel and Please Flatter Me. At the top of the lane Excess Capacity tired as Please Flatter Me inherited the front through 3/4 in 1:11.44 and 7f in 1:24.41. Espresso Shot, 8th early under Eric Cancel, swept 5 wide into the lane and rallied to win by 3/4 length over 5-1 fourth choice Oxy Lady in 1:37.69. It was a head back to favorite Orra Moor third. There was a stewards' inquiry into the stretch run of fourth place finisher Please Flatter Me, in addition trainer Jack Sisterson of Oxy Lady claimed foul against jockey Eric Cancel aboard Espresso Shot for interference but no action was taken and the result was allowed to stand. 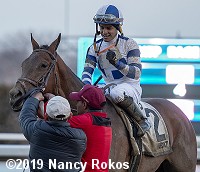 Left: Espresso Shot in the winner's circle. Daniel Zanatta, managing partner of winning owner NY Final Furlong Racing Stable said, "It's so exciting to go from winning a (restricted) stakes with a New York-bred to come into open company and basically ensure a spot in the Kentucky Oaks. It's pretty special. We only buy New York-bred fillies. My dream is not to win the Kentucky Derby, my dream is to win the Kentucky Oaks with a New York-bred filly, and we're on our way, so it's very exciting. She's been on the track training as a 2-year-old since April 1 and she's never missed a breeze. She trained perfectly, and it's great to get this big win with a young trainer (Jorge Abreu) just starting out. We were all in the winner's circle jumping up and down and to have her come wide and be six or seven lengths off of it, it was the best way to win a stakes race."

Right: Espresso Shot returns after the race. Winning jockey Eric Cancel said, I had a wonderful trip. I had it all planned out in my mind. I mean, it worked very well. The filly broke there with them. I was just trying to get her to a comfortable position, where we were both happy. I did have the trip, once I started getting closer to the 3/8, I just swung her out a little bit, and just let her cruise around. Once I got to the quarter pole, it was 'let's go.' I was very confident. Jorge Abreu knows what he's doing; he does a good job. She's a very talented filly. I didn't have any doubt that I had a shot to win the race." 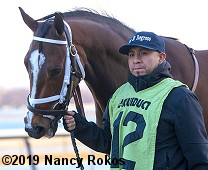 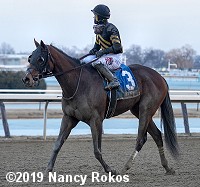 Left: Second place finisher Oxy Lady returns after the race. Jockey Javier Castellano said, "She put in a good effort. I maybe could have won the race, but (Please Flatter Me) was hit left-handed (by jockey Alex Cintron) and came over and bumped some of the other horses in between. I got the worse of it in that case. But it's nothing you can control. She has a lot of talent. That's the way she's supposed to run; off the pace. I liked the way she finished today."

Right: Third place finisher and beaten favorite Orra Moor walks over before the race. This was her first defeat in three lifetime starts and her first try in stakes company.


A field of 8 older horses went 1 mile on the main track in the $150,000 Stymie Stakes. Vino Rosso was sent off as the 9-5 favorite, unraced since 5th in the Travers (G1), over 9-4 Sunny Ridge, second in the Jazil after finishing 3rd in the Cigar Mile (G1), and 5-2 Stan the Man, 6th in the Cigar Mile before winning 2 straight allowances. 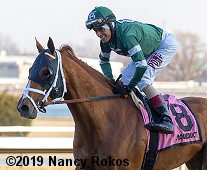 Left: Vino Rosso in the winner's circle. Byron Hughes, assistant to winning trainer Todd Pletcher said, "I thought it was a good race. He broke well and Johnny [Velazquez] got him in a good spot in the clear on the outside. He had enough to finish it out and he looked good. I think it was a good starting point for him to get back into the races going a one-turn mile and hopefully he comes out it in good shape and we'll go from there."

Right: Vino Rosso heads back to the barn after the race. Winning owner Mike Repole said, "He really broke sharp out of the gate and spotted the field several lengths before he decided to work his spots. He came off the pace, came back on the pace, then came off the pace again. I thought this was his first race where he was sharp the whole time. When he finally got to the lead, he waited again and the best thing that could have happened is that (Title Ready) gave him a bump and that got him focused, and reminded him why he was here today, and he took off. I think they could have went around four times and nobody would have caught him." 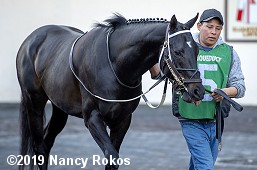 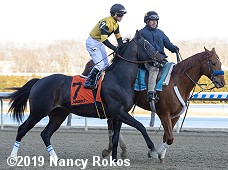 Left: Second place finisher Title Ready in the paddock before the race. This race increased the Steve Asmussen trainee's lifetime record to 3 wins, 5 seconds, and 2 thirds from 16 starts with $383,300 in earnings.

Right: Third place finisher Shivermetimbers in the post parade. This race increased the Jerry Hollendorfer trainee's lifetime record to 3 winns, 2 seconds, and 5 thirds in 15 starts with earnings of $186,590.