The highlight race on Saturday at Del Mar was the $200,000 Best Pal Stakes (G2) for two-year-olds sprinting 6 furlongs on the main track. Conditions were excellent with sunny skies and temperatures in the mid 80's. Just five made final entry, with Instagrand sent off as the 1-10 favorite, off his 10-length debut win at Los Alamitos. In to challenge him included 15-2 second choice Owning, a 2 1/2 length debut winner at Los Alamitos, and 8-1 third chice Mason Dixon, a debut winner at Del Mar by just 3/4 length last out.

Jockey Drayden Van Dyke sent favorite Instagrand to the lead exiting the chute through fractions of 230.0 and 46.54 while pressed by Owning and stalkd by 14-1 Sparky Ville. Entering the lane, Instagrand left the field in his wake, opening up by 7 lengths through 5f in 58.17. Under a handride Instagrand drew off to win by 10 1/4 lengths over Sparky Ville in 1:10.27. It was another 3 1/4 lengths back to 19-1 longest shot Synthesis third. 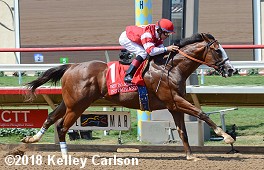 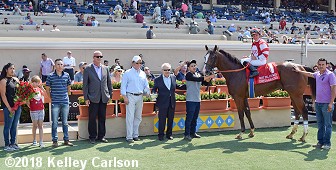 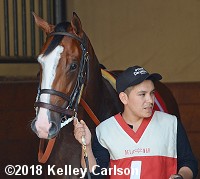 Left: Instagrand in the winner's circle. Winning trainer Jerry Hollendorfer said, "I was a little bit worried (with the delay at the gate); some of the colts were acting up, but then they got them in there. He broke good even though he had been standing in there awhile, then Drayden (Van Dyke) got this colt to relax and he did his thing. I think it is an improvement (over his debut race) in that he did it so much easier. We'll look at the Futurity for him, for sure."

Right: Instagrand in the paddock. Winning jockey Drayden Van Dyke said, "I haven't been getting on him in the morning (since he rode him to victory in his first start on June 29 at Los Alamitos). But they told me he was ready. Oh, yeah. I just threw a couple of crosses at him today; that's all. Cadillac. I wanted to see if he'd change leads on his own, but in the end I just gave it a little weight shift (to the inside) and he made a perfect change. He's got the mind of a 4- or 5-year-old. Professional." 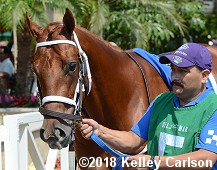 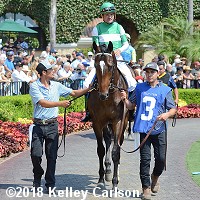 Left: Second place finisher Sparky Ville in the paddock. Jockey Gary Stevens said, "He beat 'em all, but one. Don't even ask me if I could see the winner."

Right: Third place finisher Synthesis returns in the paddock. Jockey Kent Desormeaux said, "He tried. That's all I can say – he tried."