The highlight of the Saratoga meeting is the $1.25 million Travers Stakes (G1) featuring the best 3-year-olds on the east coast going 1 1/4 miles on the main track, with 49,418 fans packing the historic upstate oval. A field of 10 went to post under sunny skies and temperatures in the high 70's, with juvenile champion and Kentucky Derby (G1) runner-up Good Magic sent off as the 3-2 favorite off his 3 length win in the Haskell Invitational (G1). In to challenge him included 7-2 second choice Gronkowski, 2nd in the Belmont Stakes (G1) after winning the Burradon Stakes at Newcastle, and 7-1 third choice Catholic Boy, winner of the Pennine Ridge (G3) and Belmont Derby Invitational (G1).

Jockey Ryan Moore sent 14-1 Mendelssohn to the lead first time by and he set fractions of 23.30, 47.81, 1:11.97, and 1:36.29 while pressed by Catholic Boy and stalked by 17-1 Tenfold and 11-1 Wonder Gadot. Entering the stretch, jockey Javier Castellano sent Catholic Boy 4 wide to pass Mendelssohn, and he opened up a 2 1/2 length lead midstretch through 9f in 1:48.80. Kept to task by Castellano, Catholic Boy drew off late to win by 4 lengths over Mendelssohn in 2:01.94 over the fast main track. It was another length back to 10-1 Bravazo third, while favorite Good Magic checked in 9th. 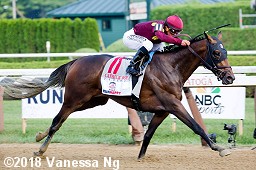 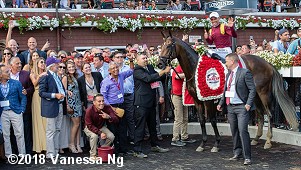 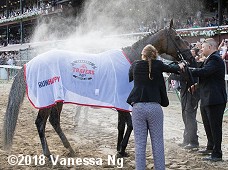 Left: Catholic Boy in the winner's circle. Winning co-owner Robert LaPenta said, I've been coming to Saratoga since I'm 18 years old. I won't tell you how long ago that was. This race has always been my dream, even more than the Kentucky Derby. I know a lot of people don't understand that. The Midsummer Derby was always my dream. We always one it a couple of times with the cliff's edge and a couple of other horses. This horse has been special from the first time we heard of him, and Jonathan and the team, they have done just a phenomenal job."

Right: Catholic Boy gets hosed off after the race. Winning trainer Jonathan Thomas said, "The beauty of having Javier and riders of his ilk is you really don't have to give him much in the way of instructions. When I saw him warm up the way he did, he just seemed happy and moving well, and I thought we'd probably break sharp. When he threw up the first quarter fractions, half fractions, I thought it was a reasonable time for where we were. When I saw him still traveling nicely to the 3/8 pole, I thought we were golden because that's where he really starts to get strong. The mile and a quarter has always been something we've really known is his best distance. He proved today maybe he's better on the dirt." 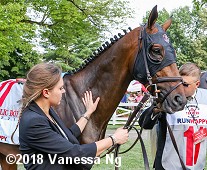 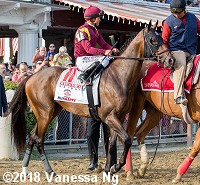 Left: Catholic Boy in the paddock. Winning jockey Javier Castellano said, "I felt great [around the turn], so comfortable with him because of the way he's been training. I really like this horse. He does it by himself. When the good horses show up, they are always there. He beat some good horses and a good filly and I think he's one of the best horses in the country so far. There's so much history at this track. To win six Travers, I've been very, very blessed and very lucky and fortunate to be part of it. He's a nice horse. I've been riding a lot of good horses and I have a lot of support, a lot of help, for many years. He's so good, that horse. I've never seen a horse like that in my life. He can run on turf, dirt; I think he's amazing. He won Grade 1 on the turf and a Grade 1 on the dirt, he's only 3 years old, you don't see too many like that. I've been blessed to be part of it."

Right: Catholic Boy comes out for the post parade. Thomas added, "There were so many good horses behind him. I was waiting for something to kind of appear from out of the clouds, and they didn't. Normally, with these sort of races, by the time you're at the quarter pole, it just becomes kind of a slog to the wire. I was impressed that he just kept going, and the rest of the horses are kind of just peeling back. He just keeps surprising us every race. The last three races were nail biters, and then he goes and wins by five against what's left of the best of the 3-year-olds. That's part of the game, there's the attrition and the training and the racing, and he's still here. So it's a big credit to him." 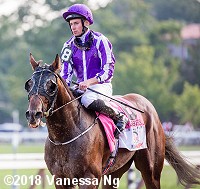 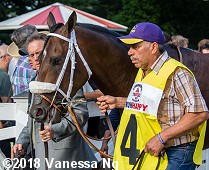 Left: Second place finisher Mendelssohn returns after the race. T.J. Comerford, assistant to trainer Aidan O'Brien said, "This was a big improvement. Aidan planned on bringing him here, and he stuck to his guns. Aidan could have easily run him on the turf at home, but he stuck with it over here. It just shows he's coming back to his best. I'm sure he'll be back [in the United States] soon."

Right: Third place finisher Bravazo in the paddock. Trainer D. Wayne Lukas said, "He's been through the whole series. He's keeping it honest. Nobody's stealing anything, and he's beaten some pretty good horses. I'd like to see it a jump or two longer, he might have gotten second. I liked the way he ran. He continues to add to his income and his resume." 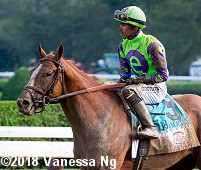 Left: Ninth place finisher and beaten favorite Good Magic returns to be unsaddled. Jockey Jose Ortiz said, "He broke slow and when we went past the wire [the first time] I thought he would probably go on and put myself third and in the clear. I got pushed out a little bit, so I decided to take back and I fought for that position the whole way. I took back and he relaxed well but when I asked him to run I don't think he enjoyed being back there. He likes to have a clean face; that's his 'A' game. I went on with him, but I didn't have much."

Right: Shortly after the start of the Travers. Chad Brown, trainer of Good Magic said, "He didn't break well and from there he was in trouble. We wanted him no worse than third early, that's his running style, and especially given the way the track bias has been. When he didn't get there, I didn't feel too good about it. I was hoping he could recover down the backside and he started to advance, and although he had a wide trip he was moving up a little bit. I figured it wasn't impossible. If he really runs an incredible race today, he could maybe circle them and go. But Jose (Ortiz) reported to me that at the half-mile pole he started to not feel good under him. He didn't have that horsepower under him, so to speak. He just didn't have it. He wasn't pulling him there at point, so he started to retreat some."