The $1.01 million Betfair Haskell Invitational Stakes (G1) is New Jersey's most prestigious race, featuring some of the top East Coast 3-year-olds going 1 1/8 miles over the main track at historic Monmouth Park in Oceanport, looking for automatic entry into the Breeders' Cup Classic (G1) under the Breeders' Cup Challenge Series "Win and You're In" promotion. Conditions were excellent for the 37,186 fans in attendance, with sunny skies and temperatures in the low 80's. Breeders' Cup Juvenile (G1) winner Good Magic was sent off as the 1-2 favorite in the field of 7, after winning the Blue Grass (G1) before finishing second in the Kentucky Derby (G1) and 4th in the Preakness (G1). In to challenge him included 5-1 second choice Bravazo, the Preakness runner-up but 6th in the Belmont (G1), and 21-4 third choice Core Beliefs, winner of the Ohio Derby (G3) after finishing second in the Peter Pan (G3).

Jockey Albin Jimenez sent 45-1 Roaming Union to the lead first time by and he set fractions of 23.15, 46.83, and 1:11.48 while pressed by Good Magic and stalked by Bravazo. Entering the lane Roaming Union tired badly as jockey Jose Ortiz aboard Good Magic inherit the lead and quickly opened up a 4 length advantage midstretch through 1 mile in 1:36.97. Bravazo gave chase to no avail as Good Magic cruised to a 3 length win in 1:50.01 over the fast main track. It was a long 6 lengths back to 11-2 fourth choice Lone Sailor fourth. 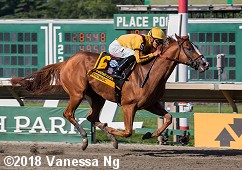 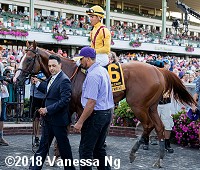 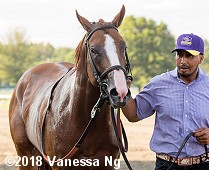 Left: Good Magic in the winner's circle. Winning jockey Jose Ortiz said, “He broke sharply and put himself in good position on the backstretch. He gave me a lot of options. When I asked him to go, he just exploded. When I hit him left-handed by the eighth pole, he gave me another gear. I geared him down late because we have other big races coming up.”

Right: Good Magic heads back to the barn. Winning trainer Chad Brown said, "I took my trainer’s test at Monmouth after the 2007 Breeders' Cup. Monmouth has always been good to me. This is one of the tracks I got started at and a race near the top of the list of the ones I wanted to win. With Justify out, this horse is on top of the division. I think everyone would agree with that. He's still standing. He's a tough horse and I'm so proud of him. This horse trains on. He's a great racehorse and someday he'll make a great stallion. Having run a great race at Churchill Downs at 1 1/4 (in the Derby), you would have to think (Breeders' Cup Classic is) a target for him. I'm very comfortable with his race over that track. Hopefully he stays healthy and everything goes right and we'll run him." 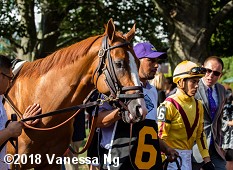 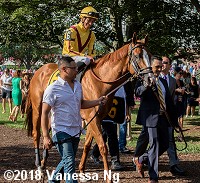 Left: Good Magic in the paddock before the race with trainer Chad Brown giving instructions to Jose Ortiz. Brown added, "The horse needed the time off (after the Preakness). I'm surprised that he ran hard on those tracks (in the Derby and Preakness) and still ran like this today. He's like his father. He's made of steel. I feel this horse is ready for another good form cycle. He ran a great race today and I think he might have had a little more in the tank when he crossed the wire. This horse looks for competition and he couldn't find any."

Right: Good Magic heads out of the paddock. Winning co-owner and breeder Barbara Banke (Stonestreet Stables) said, "Curlin brings out the best in his offspring," she said. "The heart, the sturdiness, a quick turn of foot. Having the mare and sire, we're very proud of him, and you couldn't ask for nicer and luckier partner." Co-owner Bob Edwards added, "I surround myself with smarter people than me and you couldn't have a better partner than Barbara. This is a special day for me and even more special for Barbara because she raced Curlin and won this race with Rachel Alexandra. Everything was great. I hadn't seen the horse in a while and he gained weight since the Preakness. When I saw him today, I said, 'Wow.' He looked great. He was more muscular." 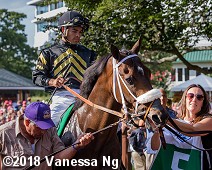 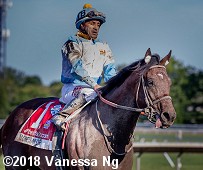 Left: Second place finisher Bravazo in the paddock before the race. Jockey Luis Saez said, “My horse ran great. I did everything I could to get him up. I switched to the left to see if I could get more out of him. I just lost to a better horse today.”