The $1.75 million William Hill Haskell Invitational Stakes (G1) is the highlight race of the Monmouth Park meeting, featuring some of the top 3-year-olds going 1 1/8 miles over the main track in Oceanport, New Jersey, also looking for automatic entry into the Breeders' Cup Classic (G1) under the "Win and You're In" promotion. A Monmouth Park record 60,983 fans packed the historic Jersey Shore oval on Sunday afternoon, under partly cloudy skies and temperatures in the mid 80's. The race marked the return to the track of newly crowned Triple Crown winner American Pharoah, who was bet down to 1-10 favoritism in the field of 7, undefeated in every start except his debut at Del Mar just over a year ago. In to challenge him included 7-1 second choice Upstart, second in the Florida Derby (G1) before finishing last in the Kentucky Derby (G1), and 9-1 third choice Competitive Edge, winner of the Pat Day Mile (G3) but 6th in the Woody Stephens (G2) last out.

Jockey Mike Smith sent Competitive Edge to the lead first time by and he set fractions of 23.22, 46.14, and 1:09.60 while stalked just to his outside and a length back by American Pharoah, in turn a lenth ahead of 27-1 Mr. Jordan third. At the top of the lane, jockey Victor Espinoza loosened the reins as American Pharoah easily took command from the tiring Competitive Edge, opening up a 5 length lead at the 1/8 pole through 1 mile in 1:34.44. 18-1 Keen Ice, 6th early, put in a strong late rally but American Pharoah, already geared down by Espinoza for the final 1/16, cruised past the post 2 1/4 lengths clear in 1:47.95 over the fast main track. It was a long 3 lengths back to Upstart third. 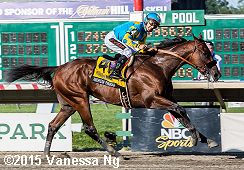 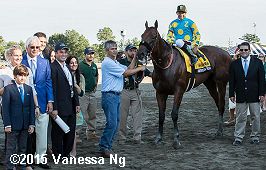 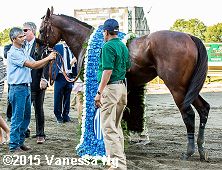 Left: American Pharoah in the winner's circle. Winning trainer Bob Baffert said, "I was so nervous today. I was pretty anxious. I was more nervous than any time I've run him. He got a little stirred up in the paddock. He was pretty fresh because he's had a lot of time between races. I wanted him sharp today because I knew the pace was going to be fast. Competitive Edge, he's a fast horse. He was just cruising. Down the backside, I saw Victor had a hold of Pharoah and I looked at those fast fractions, but it looked like he was going in :48. It's something that every time we run him or work him, he's just getting stronger and better. What I saw was amazing. I watched like a fan today. I'm looking at this horse like, where did he come from? I've had some really nice horses, but this horse, what he does is just incredible. He makes me emotional because he's a gift from God."

Right: For some reason they never put the flower blanket on American Pharoah for the winner's circle, but they did for a bit after he was unsaddled. 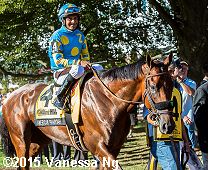 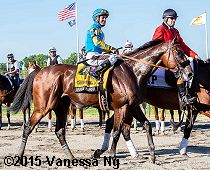 Left: American Pharoah in the paddock before the race. Winning jockey Victor Espinoza said, "It was pretty easy. For me the key was just coming out of there running. I didn't want to get into any bumping out of the gate. I just wanted to let him run his race. I knew that (Competitive Edge) would want to take the lead, so I sat back just a little bit, maybe a half-length behind. He did everything by himself. It was pretty easy. Pretty impressive." 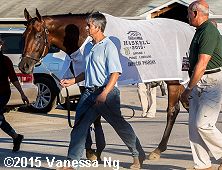 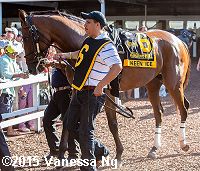 Left: American Pharoah back at the barns after the race.

Right: Second place finisher Keen Ice comes out of the saddling area into the walking ring. Jockey Kent Desormeaux, "The horse gave me the race of his life. He ran the entire mile and an eighth. I'm so proud of him." 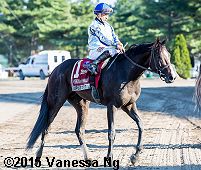 Left: Third place finisher Upstart returns after the race. The 7-1 second choice raced 4th 3 lengths off the pace under Joe Bravo, but could not rally finishing 3rd beaten 5 1/4 lengths. The Rick Violette trainee improved his record to 3 wins, 3 seconds, and 2 thirds in 9 starts, earning $1,121,480 for owners Ralph Evans and WinStar Farm.

Right: First time by in the Haskell Invitational with American Pharoah racing in second between Competitive Edge and Mr. Jordan. 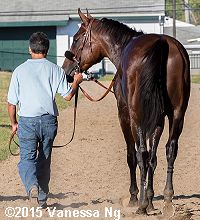