Although slightly tarnished by the absence of Afleet Alex, the Haskell Invitational still attracted a nice field of eight 3-year-old colts and a crowd of 43,769 to watch. Roman Ruler, who missed the Triple Crown due to foot problems, was the 11-10 favorite off his comeback win in the Dwyer in July. Sun King and Park Avenue Ball were close second and third choices, both coming off wins at Monmouth Park in their last starts. Golden Man was a late scratch taking the field down to seven starters for the $1 million race at 1 1/8 miles.

Sun King went straight to the lead at the start and held it until the stretch through fractions of 23.54, 47.72, 1:11.69, and 1:36.77. Roman Ruler stalked the pace from fourth early then made his move in the stretch to collar Sun King and draw off to a 1 1/4 length victory in a final time of 1:49.88. Park Avenue Ball was always close, but never was able to get to Sun King and finished third 2 more lengths back. Chekhov was a late closing fourth, while Canadian invader Palladio was fifth, followed by Papi Chullo and Joey P.

The victory was the third for trainer Bob Baffert, his others coming in 2001 with Point Given and 2002 with War Emblem. This ties him with Sonny Hine and Warren A. "Jimmy" Croll for most victories by a trainer. 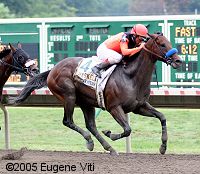 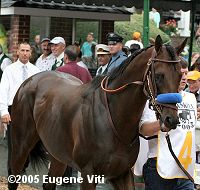 Roman Ruler comes into the paddock for the Haskell. His trainer Bob Baffert said, "This was my most gratifying Haskell. Roman Ruler had to prove he was that kind of horse - could he step up to win a Grade 1? It was his coming out party, to show that he could do it. All I told Jerry was that the horse was better today than he was last time. I told him he was ready today. That's all you tell a jockey like Jerry."

Baffert plans to ship Roman Ruler to Saratoga where he will plan out his campaign for the Breeders' Cup Classic. 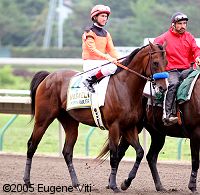 Jerry Bailey and Roman Ruler in the post parade for the Haskell. Bailey said, "I think he'll go on from this. He seems to me to be very versatile. He's a better horse now then he was in the Dwyer. He waited a little bit when he got to the lead, the same as he did in the Dwyer. I waited until the 3/16ths pole before I asked him and I was very confident that I'd reel in Sun King." He added, "Bob led me to believe he'd be a little keener today. He broke well and I was able to tuck in around the first turn. He took to the track well. I could have waited and been a little farther back, but he was going so well, there was no reason for that. He tugged me up to the leader, and it was pretty simple from there." 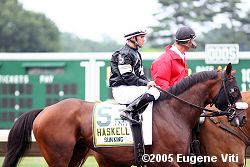 Second place finisher Sun King in the post parade. Tim Poole (asst. trainer to Nick Zito, trainer of Sun King) said, "He ran game. He just couldn't beat that other horse (Roman Ruler). I actually thought that Joey P. would be on the lead coming out of all those sprint races, but we ended up inheriting the lead. I was happy with his race."

His jockey Javier Castellano said, "I had a perfect trip. It was like a dream. He made the lead easily and relaxed nicely on the backside. When I asked him to go he responded, but Jerry (Bailey) had a lot of horse left." 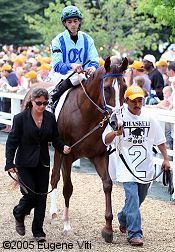 Third place finisher Park Avenue Ball heads to the track for the Haskell. His jockey Chris Decarlo said, "He just didn't like the inside, but I had to play the cards that I was dealt. When I got him out on the turn, he put in a good run, but those are two really nice horses that beat us."

His trainer Jim Ryerson said, "He ran his race, but he was stuck down inside most of the way. I think he tensed up a little bit. He ran well, though." 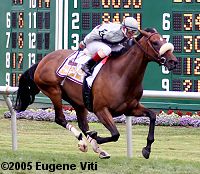 Love Match led all the way to upset the $150,000 Taylor Made Matchmaker Stakes (G3) on the Haskell Day under card. Love Match, who went off at 27-1, took the lead from the start and never let go, sailing to a one-length victory over Cat Alert, a 9-1 chance. Emerald Earrings, 6-1, was a half-length farther back in third, a head in front of Spotlight, the even-money favorite in the field of 10 fillies and mares.